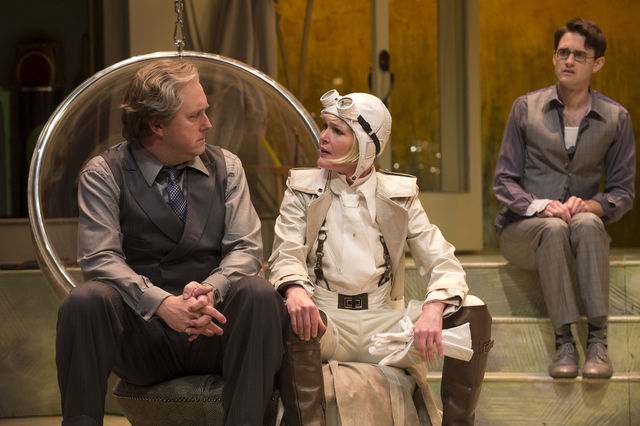 At the Shaw: Misalliance

Director Eda Holmes was very thoughtful in her approach to George Bernard Shaw’s Misalliance. In her director’s note she talks about the idea of experimentation (the mixing and matching of couplings and alliances to see how each turns out) and how she and designer Judith Bowden interpreted that theme into a Petri dish “where all the characters can interact and mutate”. I love that idea. It’s unique and interpretive and makes that pesky outlandish plane crash seem more like an overseeing scientist’s variable than a lazy writer’s device. I love when a director picks a theme like that to play, and I love when a director plucks a story out of period and lets the characters and relationships fit in some time else (as the characters and relationships of most great playwrights easily do). But Eda Holmes tried to do both: emphasize a theme literally and explore a time period beyond its own. The 1962 setting works for all the reasons Holmes outlines in the program (the rise of feminism, class disparity) and doesn’t work in ways that thoroughly don’t matter (the danger and foreignness of air travel) but it’s just a less interesting angle than the Petri dish idea and effectively drowns it out (I’m not sure anyone who didn’t read the program got the experimentation angle at all). Don’t get me wrong, I liked the 60s element- it works, and is far more interesting than 1910 would have been- but I would have liked to see a production that fully plays with the idea of experimentation and doesn’t worry about when that experiment is happening.

That said, while it isn’t as fascinating as the play I hoped for after reading the director’s note, Misalliance is still a uniquely well constructed production considering so many GB plays at the Shaw festival are treated with a “give it some corsets and a decent actor or two and The Text will do the rest” reverence. Not that Holmes didn’t give it a decent actor or two, she gave it more than two. Krista Colosimo is particularly good as the bored and snarky daughter of an underwear tycoon, Hypatia. She’s a little too daffy-ingenue at first for me to understand why the company would waste such a savvy actress (and My Theatre Award winner!) on the role, but late in act two when she starts really giving her father the business and laments that they could actually be friends were he not her father, I started to see why Colosimo was needed for the role And what was actually interesting in a script that had previously just been amusing. While Shaw’s anti-family conclusions are his usual over-reactive, narrow-minded idiocy, the conflict between Hypatia and her father is so well-drawn that I was sure it was a recorded argument I have with my father, well, every day (father: “hold your tongue”, daughter: “keep your temper”). Sadly, my father would never end such an argument with “I’ll read King Lear“, but that’s my burden to bear. Hypatia’s father is played by Thom Marriott, a lovable teddy bear of a man who is so charming that I easily feel Hypatia’s pain- few things are as aggravating as being infuriated with a charming person. Marriott is splendid as John Tarleton and sells his oppressive-meets-jovial-meets-lowbrow paternity well. He’s joined by Catherine McGregor as his caring but clever wife and the always delightful Jeff Meadows as his brute son of underrated intelligence.

The overrated intelligence belongs to Bentley Summerhays, Hypatia’s petulant and small suitor who flashes between intellectual condescension and temper tantrums. Ben Sanders, this season’s go-to actor for high-class smartypants characters, goes full silly with Bentley, resulting in a wildly funny scene-stealing performance that is so different from Alan in French Without Tears that, if it weren’t for the self-satisfied grin Sanders gives both, you wouldn’t know it was the same actor. Bentley’s rivals for Hypatia’s love are, creepily, his father Lord Summerhays (played goofy and unlikable by Peter Krantz) and Joey Percival, an underdeveloped character who doesn’t appear until act two then accidentally steals Hypatia heart. Luckily, someone along the road (I’ll give the credit to Holmes) had the good sense to cast the excellently charming Wade Bogert-O’Brien, so the underdeveloped heart-stealing prompts less “huh? why?” and more “yeah, okay that makes sense”.

Joey literally falls from the sky to enter the story (Literally) and he brings with him a mysterious Polish woman played with amusing verve by Tara Rosling. The character seems planted just to deliver her big “women are capable of more than just sex!” speech (I may have paraphrased a bit) but she’s so much less annoying than anticipated that it’s fine. The other random, uninvited, senseless character is “Gunner”, played with endearing desperation and decent comic timing by Craig Pike. Gunner (who has so many pseudonyms that the program just identifies him by the prop he carries) is a silly plot device who pulls attention from the relationships that have actually been developed over the 2 hours he’s not in the show. Pike plays him well, just as Rosling plays Lena Szczepanowska well, but that doesn’t make his character less haphazardly thrown in. Thematically, they’re important I guess, but I honestly think Hypatia, Johnny and Bentley could handle those themes on their own. Shaw’s a strange writer and random characters are pretty common in his work, but he just got lazy in act two of Misallianceand threw in characters he didn’t need to make points he otherwise couldn’t figure out how to make.

Eda Holmes did a lot of thematic exploration in Misalliance and her cast really comes through, developing their characters into more than they are on page (especially in the case of the stupidly written characters), but it’s almost as if Holmes’ ideas are at odds with one another, canceling each other out. I was glad to see her 1962 interpretation, and one day I’d be really curious to experience a version that plays with her Petri dish idea more overtly. But this particular production just couldn’t be both at the same time, so it was the former with the occasional missable hint at the latter.