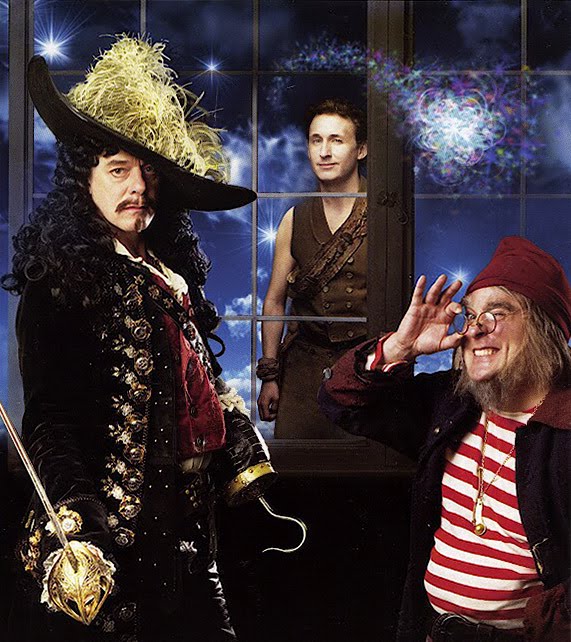 The Myth of Peter

I find it singularly difficult to review a production that everyone seems to love. Everyone I’ve spoken to about the Stratford Shakespeare Festival’s Peter Pan has told me they loved it. And I don’t mean casual love, I mean “that was the best thing ever!”, rave reviews that tell me the production will surely blow my mind. Invariably, after such reviews, I leave the theatre underwhelmed.

My experience of Peter Pan was not much different. The actual production is nothing compared to the triumph that lives in the imagination after leaving the theatre. Which is not to say these people are wrong in their assessment. I adamantly believe that one’s impression of Peter Pan has less to do with what you’re seeing and everything to do with what you believe in. If you leave the theatre inspired, your mind will fill with fantastical memories that may or may not be accurate: the pirate ship will be bigger, tinker bell a bit brighter and Peter will fly a bit higher. All the while you will never see a single wire or harness. Oh how I wish my reviewer’s mind had allowed that to be my impression of Peter Pan. I desperately wanted to fly off to Neverland with Michael Therriault (whom I’ve loved since I was a kid watching Camelot). But try as I may, my body never left my seat and I saw every string before me.

Call me critical, closed minded or cynical, go ahead, I’ve heard it all before. But I will say that there are other productions this season that live in my mind a little brighter than they actually were. Some things convinced me that I was watching characters not actors and that magic was really happening. But Peter Pan didn’t. So I ask you to be patient as I give Peter Pan a thoughtful and technical review with only a small touch of sentiment; a review that you undoubtedly may find harsh.

Technically, the spectacle of Peter Pan is well executed. I saw the wires but they could not feasibly be any more invisible. Everyone flies when they are supposed to and I’m sure an untrained theatre eye may even be baffled at how many effects are achieved. Classic (and some innovative) theatre tricks are performed with ease as pirates toss helpless lost boys off the balcony, shadows move of their own accord and Tom McCamus appears in two places at once. That last one is particularly fun since they go so far as to use a pseudonym for the actor playing JM Barrie in the program, my mother didn’t even realize it was the same person until well into the play. The pirate ship is suitably impressive and, providing you possess a child-like sense of wonder, even the waves are pretty cool.

The performances are consistently solid, though few stand out as exceptional. Michael Therriault is well cast though a little caricaturish in the part. As is Sara Topham, generally one of my least favourite actresses in the company, who’s annoying barbie doll mannerisms are actually perfect for Wendy. Perhaps the biggest problem with the performances in Peter Pan is that to play the characters well, the seasoned actors have to play up the cartoonishness they so often try to avoid. McCamus shows great range as he plays the over-the-top villain Captain Hook but also gets the more low-key opportunity to portray the warm and human author narrating the story. Paul Dunn and Stacie Steadman clearly have great fun playing John and Michael and are consequently great fun to watch. Similarly, the lost boys are a hoot and a half. The pirates are icky as all get out, which I suppose makes them good, but Sean Cullen’s Smee is altogether uninteresting. Jay T Schramek’s turn as Nana the dog is remarkable to behold, but that was obvious going in.

For me, the greatest assets of Peter Pan are the generally under-appreciated characters of Mr. and Mrs. Darling. Sanjay Talwar, a master of distinguishing small roles, is a charmingly flawed father figure. But it’s Laura Condlln’s sympathetic mother who provides the real heart of the piece. As we near the end of the somewhat slowly paced play with which I’ve been struggling to connect all night, the character of author JM Barrie turns the attention away from the fantastical pirate ship and back to the lonely bedroom where Mrs. Darling sits crying by the open window through which her children had flown away. He tells the audience that he expects many of them really like Peter, others prefer Wendy. Then he points to the tearful mother and says “but I like her best”. Here is where the play makes the jump from impressive (in production value and energy) to meaningful, a truly necessary jump. Throughout the piece we are bombarded with stories of terrible mothers: those who’ve lost or abandoned their children, those who’ve generally not cared. But JM Barrie won’t let the audience leave with that. He needs them to know that they’re not all like that. Sometimes there are mothers who care for their children more than anything in the world. There are mothers out there who would give anything to keep their children safe, no matter how much they may try to fly away; mothers who will leave the window open for eternity, holding on to a tiny shred of hope that their children may fly home.

Mrs. Darling, a small character with few lines who doesn’t get to fly, fight or do anything cool really, she’s the heart of the story. It’s not about pirates and amazons, fairies and poison and sword fights or any of Peter Pan‘s theatrics. Without Mrs. Darling, it would all be empty production values and cartoon characters. In her few lines, Mrs. Darling makes Peter Pan a story to care about.

In case you were wondering, that’s the moment I stopped seeing the strings.