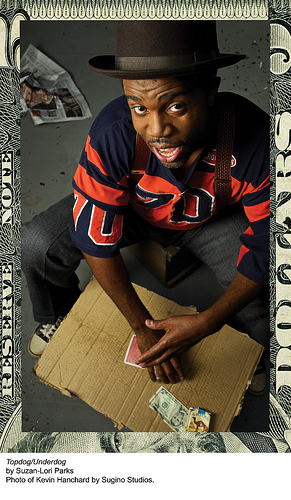 At the Shaw: Topdog/Underdog

I was dreading Topdog/Underdog. I had to read Suzan-Lori Parks’ Fucking A in school and could not have despised it more. I was anticipating an angry, expletive-ridden, crass 2 hours designed to provoke response through discomfort. It’s possible that the script could read that way, but Philip Akin’s production in the Shaw Festival Studio Theatre is so much more than that.

I think what a Parks script needs is to not be just a script anymore. It needs warm bodies and beating hearts, someone to put a face on the rough characters. In short, what Topdog/Underdog needed was Nigel Shawn Williams, Kevin Henchard and director Philip Akin. In their hands, Parks’ characters (the fantastically named Lincoln and Booth) shone through for all their conflicted complexity and subtle humanity, Parks’ pulsating rhythms taking centre stage over the alienating intensity of the dialogue on paper. The beatnik mantra of the card game motif is particularly cool- recurring over and over with slight and beautifully revealing variants. With the help of relatable and engaging actors, Parks’ work goes from hard to read to fascinating to watch.

Camellia Koo’s thoughtful set design added to the production’s overriding sense of cool with small elements of great metaphorical value. My favourite was the scattered jenga-like pieces that had the effect of the floorboards (the very ground the characters stand on) crumbling beneath them, falling apart. The metaphor was great but it also gave a visceral sense of the poverty Lincoln and Booth were living in.

With names like Lincoln and Booth, it’s hard not to know where the story is going; there was simply no way Booth wouldn’t come to a point where he would shoot his brother. But I jumped anyway at the sound of the gunshot and sat immobile for a full minute after the curtain call, shocked still. That sort of engagement is a testament to how fully Williams and Henchard pulled me into their world with their spectacular performances. Henchard, a mediocre classical actor I’ve seen numerous times, really came into his own in the role of Booth, embodying the character with brilliant exuberance- he’s all anger, sex and enthusiastic romance. But he never let Booth’s eccentricities overshadow his small sensitivities- his realization that Grace is 6 hours late for their date was heartbreaking. Williams, similarly, was spectacular as Lincoln. He was slower, more grounded and possibly even more heartbreaking as he crawled towards all the terrible things both he and the audience knew were somehow inevitable.

Against all my expectations, Topdog/Underdog proved to be one of my favourite productions of the season. Of all 11 plays at The Shaw Festival, Topdog/Underdog is the one that really stayed with me and prompted the most visceral and empathetic reaction. It’s a production that makes you think, makes you feel and made me change my mind about Suzan-Lori Parks.