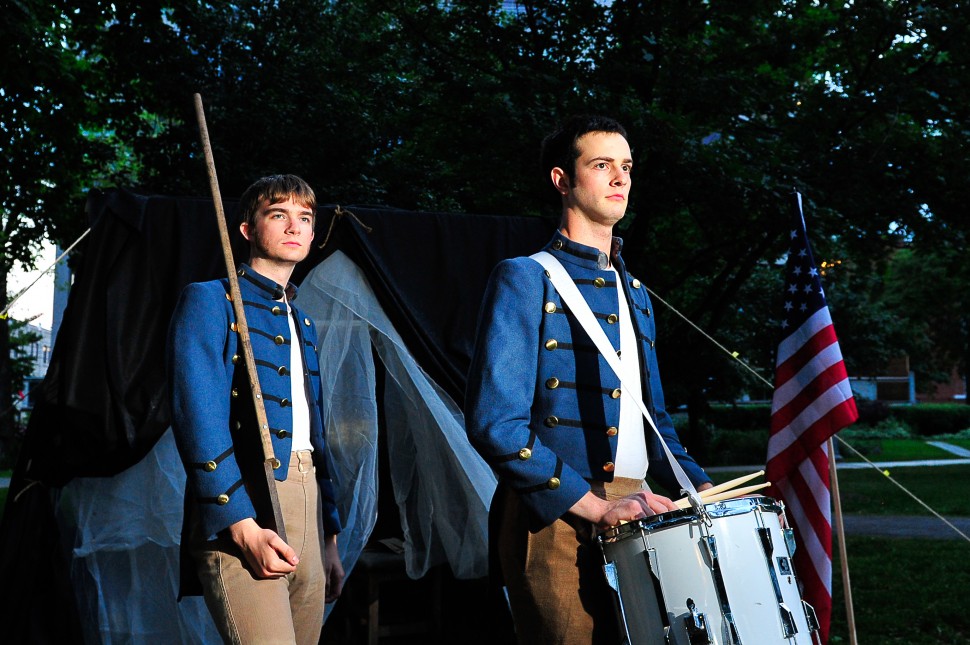 I was running around downtown Toronto like a madwoman Tuesday night, and not just because Single Thread Theatre’s The Loyalists Actually involves running (I know, I made that face too). I was mostly running because I saw two different site-specific shows in one night. I was at Campbell House (Queen & University) for 7pm to see The Templeton Philharmonic’s crazy-looking Sockdolager. It ran long and I soon found myself sprinting down Queen St. West to get to Bar Wellington (Portland & Wellington, south of King), the starting point for the 9pm Loyalists. It was 8:59 when I came careening up to the ticket table, already exhausted. As a fan of putting on a pretty dress and taking a cab to a nice, comfy, air-conditioned theatre where I sit for a few hours and watch the actors perform a strictly scripted piece unable to see me let alone interact with me, I find site-specific theatre intriguing and audience participation terrifying.

Luckily, if there were one company in Toronto whom I would trust with my utter discomfort, it would be the uniformly sweet Single Thread Theatre. There’s a good-natured enthusiasm to Single Thread that is downright infectious, and with a piece like The Loyalists, that’s invaluable. If I can possibly escape participating in any way, I will (that’s how I justified to myself the unforgivable act of trampling poor Cuddy Banks in The RLD’s guilt-inducing Witch of Edmonton) but that’s literally impossible in The Loyalists; as an immersive reenactment of the 1813 Battle of York plays out around you, you simply cannot just stand still. You start off in a big group, listening to Sarah Thorpe’s good natured Henry Boulton and Rob Lampard’s intimidating American Major Forsythe lay down the situation (the British have abandoned the town of York- future Toronto- and the Americans have occupied the city, looting businesses and destroying property).

Then it gets stressful: do you go to church or to the bar? (the oldest of the age-old questions). The characters will send you on missions, where you have to actually perform tasks. Correctly! Or Someone Could Go To Jail! Fictional period-piece in-a-park jail, but, still, JAIL. On a mission to retrieve a pack of cigarettes from skittish Ayre Osage on behalf of put-upon Mrs. Crookshank to appease the American soldiers, I was given some money and told that it was “in case I ran into any trouble”. Sure enough, it wasn’t a half hour later before some bratty audience participator ratted me out to the Americans and I had to bribe a solider to not arrest me. Along the way, I had to participate in some hearty “Make York Free” chants, sneaks some guns out of resistance headquarters, sprint across Victoria Memorial Square to squeal when I overhead the Americans get wind of our actions, do some serious group praying, guzzle some gin, infiltrate the American ranks and re-organize an old-timey bookshelf.  I also got very quickly assigned to a different task than my plus one. It was all very stressful.

But just like that one mysterious game of art-camp capture the flag that even got the bookworms involved, The Loyalists is engrossingly fun. The actors are all compelling and admirably dedicated to their characters in the demanding amounts of improv they have to do. Particularly effective are Jillian Welsh’s quick-tongued tavern owner and Tyler Seguin’ s authoritative and kindly resistance leader, the future Bishop Strachan. The cast is all gung-ho fun and the script a wonderful mix of character sense and historical nit-pickiness, but what I think is one of the coolest features of The Loyalists actually has less to do with the company’s efforts (no offense, Single Thread, I do love you). I think it’s cool how awesomely, unabashedly Canadian it all is. There’s an ending wherein Rev. Strachan gets all “I’m not British, I’m Canadian” and the heads of the crowd all seem to start nodding at those words. “Make York Free” chants echo around the park, judgement of passerbys be damned. And, most notably, when Lampard’s Major Forsythe demands volunteers join him as American Troupes at the play’s very beginning, not a soul raised their hand. Lampard pulled some teeth and eventually coaxed a few into his ranks, but even then there were more than a couple who outright refused when he tried to assign them to the wrong side of Canadian history. Ultimately, Tuesday’s 9pm battle was fought by a fascinatingly small American force because we all wanted to be the good guys. There’s a Canada-Day-Is-Coming nationalism permeating the crowd at The Loyalists, which, like the production itself, is pretty damn cool.