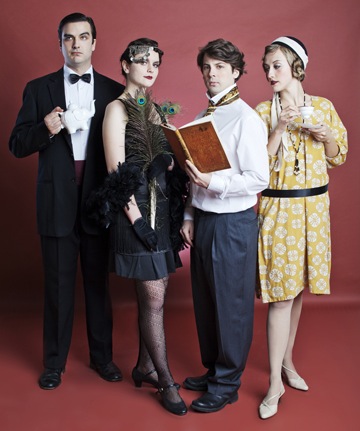 Last night I took in a one-act site-specific double feature of The Loyalists in Victoria Memorial Square and Sockdolager at Campbell House, though the two have literally nothing in common apart from being set in Toronto in some century other than this one. I started off the night with The Templeton Philharmonic at Campbell House before sprinting southwest to catch the 9pm Loyalists.

The marketing on Sockdolager is in need of some Prozac because its darkly leering oddball tone makes the show seem entirely less digestible than it really is. The actual play, though decently dark, is not in the least bit unenjoyable and the acting calibre truly remarkable. Sockdolager is, essentially, a simple story about dissatisfied people at a dinner party. The production starts off in the cramped Campbell House lobby as a hectic scene plays out in and around the audience, the characters descending from upstairs and bursting through the front door, assembling to dine. From there, sardonic narrator/valet Miguel Rivas charms, cracks wise and taunts while explaining how this evening of “spying” is going to go down. As a group, we observe a wonderfully awkward dinner, each character revealing exactly who they are in nuanced, perfectly timed little glimpses (debutante Adeline’s desperate grasps for the storytelling spotlight, mousy Edith’s chronic nosebleed, Cecil’s complete lack of couth). Then you follow a servant with a sign: The Songbird (Ely Henry’s clueless musician), The Pickle (Kat Letwin’s grumpy cook), or The Moon (Rivas) and they lead you to whichever of the three subsequent simultaneous scenes you’re to see next.

As a member of the Moon group, I was disappointed not to be with Letwin, knowing her to be a phenomenal improviser, but unlike most site-specific shows, the role of audience guide in Sockdolager isn’t very important (also, Rivas is fantastic, so no complaints here). Once each group arrives at their destination, the guide takes off to go participate in another scene (Letwin is needed in the kitchen scene all three times it runs; Rivas’s character Roland is needed upstairs in the bedroom before he can retrieve his group). Once everyone’s seen all three scenes,  the whole audience and cast reassemble in the ballroom for the denouement.

That last scene is too long but otherwise the script is sharp and fun and appropriately nagging in its underlying points about class disparity, jealousy and fundamental loneliness. Each of the central scenes has its strength. The parlor scene between estate heir/misguided artist Felix Sweetman (played fantastically ebullient and achingly sad by Roger Bainbridge) and his childhood friend/silver thief Cecil Struthers (Kevin Dowse- boisterously manipulative)  was the first I saw. Quick-witted and interestingly layered, it’s a showpiece for the excellent Bainbridge, but he walks all over Dowse (who is a standout in the earlier dinner scene then fades slightly against the brightness of his co-stars). The weakest scene is probably the second one I saw, wherein Shanda Bezic’s selfishly simple ingenue Adeline engages in an awkward and ill-advised tryst with Robin Toller’s deceitful Percival Feathers. Luckily, this dull and overblown exchange happens in the kitchen where Kat Letwin’s downtrodden Mrs. Griggs is attempting to cook dinner. A master of the exasperated look and muttered insult, Letwin easily steals the scene even before she enters into an absurd dream sequence in which she unleashes an impressive jazzy voice and hypothetical character confidence. Here she’s able to improvise a little, interact with the audience, showcase her spot-on French-Canadian accent and generally prove why she’s considered one of the most versatile-meets-awesome young performers in Toronto.

Finally our group moved upstairs to where playwrights/Templeton Philharmonic founders Briana Templeton and Gwynne Phillips play the heart of the matter. Phillips’s restless Edith Sweetman (wife of Felix) is rummaging through the guest room and mocking Maud Silverthorne (a former famed acrobat, their guest of honour, and Felix’s mistress). When Maud enters, the two have it out in spectacular fashion and it’s immediately apparent why the writer/actresses did this piece. They’ve written themselves the best roles and the best scene in the play, and both are brilliantly suited to their parts. Phillips gets a little crazy as Edith loses it later on, but in their confrontation scene she’s excellently conflicted. But it’s Templeton who easily steals the whole shooting match. The My Theatre Award winner is simply exceptional (and the reason I decided to attend, despite the problematic marketing). Her Maud demands attention, but, by god, she earns it. She’s showy and commanding but when Edith corners her she breaks down into a snivelling shell of her own postures. It’s a truly stunning performance in a production which isn’t exactly lacking in acting talent.

Sockdolager is weird and twisty and uncomfortable but it’s also laugh-out-loud funny and thought-provoking and brilliantly executed. My expectations, even of Templeton and Letwin (of whom I have sky-high expectations), were far and away exceeded.

NOTE:  I would also like to point out just how insightful a title “Sockdolager” is, meaning both “outstanding or exceptional” (as Maud is perceived to be) and “something that settles a matter: a decisive blow or answer” (as the action of the play certainly is for the lives of many of the characters). Along with “Zugzwang“, one of the most intriguingly apt titles I’ve heard in quite some time.