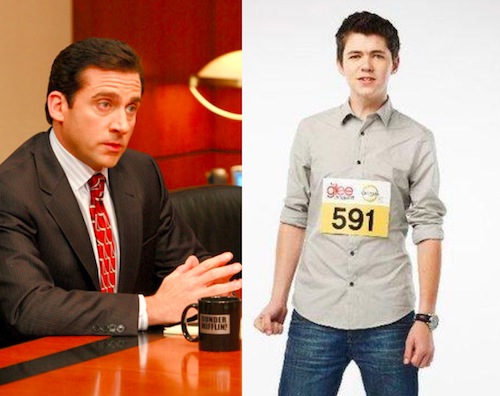 The 2011 My TV Honorary Award and Fan Favourite

Here they are, folks, the very last of the 2011 Awards from My Entertainment World. You’ve heard about the My TV, My Theatre and My Cinema Award winners, The My Cinema and My Theatre Performers of the Year and Honorary Awards, our brand new My Theatre Emerging Artist Award. You’ve read the entire 47-person Nominee Interview Series. Now it’s time for The My TV Honorary Award (a special award for someone whose work goes above and beyond and doesn’t quite fit into one of our regulary categories) and a new award this year, Fan Favourite. Though the My TV Awards have been around for 5 years now, this year our audience response was overwhelmingly more vocal than usual and about 90% of those votes were for one specific nominee. So we thought we’d make an entirely new award for him, chosen 100% by the fans.

Honorary Award
This year’s Honorary My TV Award Winner is Steve Carell from The Office. The long-running NBC comedy went through a major lifechange in 2011 as series star Carell left the show and the producers set about choosing a new manager to replace the iconic Michael Scott. They ultimately chose Ed Helms’ Andy, a wise choice that’s working out alright so far, but the loss of Michael will always be felt. In his final episodes, Carell did some of his best work as Michael proposed to the love of his life and prepared to leave his beloved Dunder Mifflin forever. The key moments of his final episode (one of which won “Moment of the Year” in the My TV Awards) will live forever in TV legend. It’s for those moments and for the 7 seasons that preceded them that we honour Steve Carell with our Honorary Award this year.

Fan Favourite
This is the site that broke the news about Joey King‘s Dark Knight Rises character identity. That incident had us on IMDB and Perez Hilton amongst many others. But we’ve never experienced traffic like we did in the hours after Damian McGinty posted on his Facebook page that he’d been nominated for Best Male Reality Star in the My TV Awards. Comments, messages and tweets started pouring in with votes for Damian to win. Even more than the original Glee cast members, The Glee Project‘s adorable standards singer with the thick Northern Irish accent may just be the most popular man on TV. In the staff vote (worth 60% of the final result), Damian lost out on Best Male Reality Star to Survivor king Rob Mariano (though his good friends Hannah McIalwain and Lindsey Pearce did win for Best Female Reality Star and Best Guest Actress respectively). But we couldn’t let the overwhelming support Damian received from his fans slide (not to mention our love for him, which is substantial in and of itself). So we created an entire new award for him that will now be a part of the My TV Awards in every year to come. Damian McGinty is our very first Fan Favourite My TV Award winner and I can’t think of anyone better to win it.