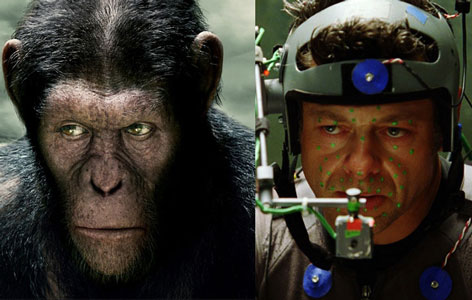 The 2011 My Cinema Honorary Award Winner

There’s always at least one magnificent piece of work that just doesn’t fit into our annual awards, either because it stands head and shoulders above the rest of the work being done or because it’s simply so very different, incomparable. That’s what our yearly Honorary Awards are for. There’s one for each branch presenting awards: Cinema, TV and Theatre, and it works basically like when the Tonys made up a category so they could reward the people who did the War Horse puppetry, there being, of course, no “Best Puppet” category at the Tonys.

Our My Cinema Honorary Award Winner this year has been doing exceptional work (in the sense of its excellence and its “unlike anything else”-ness) for years. He’s a pioneer of his field; or, at least he was the first to pull it off truly successfully and has been the best since. We all managed to forget how absolutely incredible it was that Peter Jackson and Co. were able to present such a non-cheesy CGI rendering of Gollum a full decade ago. But in 2011 with similarly motion-captured performances in Tintin and, to most astounding effect, in The Rise of the Planet of the Apes, the man who played Gollum reminded us. Andy Serkis doesn’t get the recognition he deserves for delivering complex characters through the ever-improving (to the unsettling point of uncanniness) technology of motion-capture. Maybe it’s because he looks silly covered in those blue dots, or because his face is less recognizable on screen when he’s, say, an ape, but Serkis is an astounding actor and an innovative, physical and adventurous one at that.