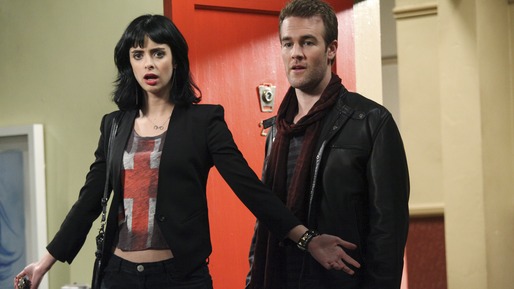 The first two episodes of ABC’s latest attempt at a “hip” sitcom are available for free on iTunes before the official premiere on April 11th. Don’t Trust the B**** in Apartment 23 is, first of all, a ridiculous title that is hard to say, hard to write and hard to force into a HIMYM-style acronym (not to mention the obnoxious “We’re On Network, We Have the FCC!” bleeping;  just pick a channel-appropriate title!). The actual show itself feels very much like “ABC’s latest attempt at a ‘hip’ sitcom”, meaning that ABC is a channel known for heartfelt melodrama and fairly decent shows about 30 and 40-somethings, it is not, nor has it ever been “hip”. ABC does “popular“, it even does “great” on occasion, but it doesn’t do “hip”. “Hip”, for the most part, happens on FOX where the anti-Cosby sentiment was literally a founding principal. Don’t Trust the B feels sort of like a cynical response to New Girl, a hipster roommate comedy with silly supporting characters and a naive, optimistic lead whose long-term love cheats on her at the start of the series. Alas, even if Don’t Trust the B were superbly written (which it is not, so far), it still wouldn’t have been first in its tone, and therefore “hip” is a long way off.

The best thing the show has going for it is the sort of genius addition of James Van Der Beek, playing a skeezy/whiney version of himself. The premise is that James, basking in endless Dawson-sponsored nookie, dated Chloe (the titular “B”) briefly then settled in as her “gay best friend, but straight”, which is cutesy wannabe-hip speak for just “best friend”. The two are all sorts of fun together and the Dawson tie-in is, admittedly, an insightful demographic grab. I’ll admit, I tuned in for my love of Dawson’s Creek; but that doesn’t make me like one of the dumb biddies in the show! It Doesn’t! Besides, anyone who likes Dawson more than Pacey is just crazy… anyway, I digress…

Krysten Ritter, who plays the “very possibly psychotic” but not-that-convincing Chloe is one of those people whom I’ve always been rooting for and never been quite sure why. She was in Gilmore Girls; she was pretty good in Gilmore Girls. Then she did a few Judy Greer-like film parts and that weird episode of Gossip Girl that was set in the 80s and, for some reason, I always liked her. And she’s fine as Chloe, not particularly great, but decent and capable of bringing some humanity alongside her effervescent manipulation, and she’s definitely better than Dreama Walker as the dumbass, dreamy-faced princess who moves to New York from (shocker!) a Small Town to get a Wall St. job, then moves into Apartment 23 with The B when that fancy job goes down the embezzled toilet. Two episodes in, June (horrendous name) is already mighty annoying- can you tell?

Liza Lapira is broad but still funny as their obsessive, jealous and vengeful neighbour Robin (though she would be well served if the writers could decide whether she was mostly obsessive, jealous OR vengeful, because they play confusingly off each other). Erik Andre has yet to really do anything as Mark other than get June a barista job she didn’t earn, but he shows some promise.

But mostly, the only really interesting thing about Don’t Trust the B is James Van Der Beek. I love the former/wannabe-current celebrity fun, I love a good male-female central friendship, and I love Dawson (not as much as Pacey, but still…) so he alone makes this striving show worth at least a casual watch.