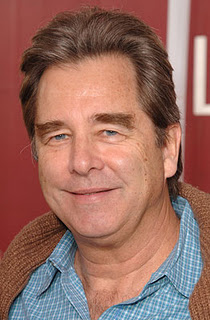 Here’s to You Eli Scruggs

Maybe I was in some sort of mood but tonight’s Desperate Housewiveswas a 5 Kleenex event.

In the series’ 100th episode, co-written by series creator Marc Cherry, guest star Beau Bridges plays Eli Scuggs, the local handyman, who dies as the episode begins. For the 43 minutes that follow, Gabrielle, Bree, Lynette and Susan plan and attend his memorial service. As they do so, they remember how Eli affected each of their lives in small but important ways.

Though we as viewers had never met Eli before, the episode paid great tribute to the history of the series. In Gabby’s memory we see her as she first moves to Wisteria Lane and faces terrible loneliness, before being introduced to her future friends by a certain handyman. Next up is Bree, who flashes back to a time when Rex was still alive and she first had her idea for her cookbook, a dream which Rex promptly squashed. We also see a slightly older Bree, just after Rex’s death, re-inspired by a gesture from Eli. Edie’s story was less affecting, though in it’s own Edie-ish way it was quite sweet and showed us some of Edie’s history that had been heretofore unacknowledged. Lynette’s flashback, similarly, showed us her before the series began but explored the professional/familial juggling act that was Lynette’s central struggle for much of the series’ beginning. Susan’s bounced around the timeline, establishing Eli as a solid figure in her tumultuous life.

For all 5 of the main housewives the episode explored unexplored history within the context of their arcs for the entire series. But it was the presence of the 6th and most elusive housewife that made this episode particularly distinct. Eli, it seems, was given his start on Wisteria Lane by none other than Mary Alice Young (the series narrator). Mary Alice establishes herself in this episode as thoughtful, kind and empathetic, which makes the re-telling of her suicide at the end of the episode all the more jarring.

I wept. I’ll admit it, Desperate Housewives made me cry. From Gabby’s heartfelt appeal for friends to the rekindling of Bree’s dashed dreams to Mary Alice’s hopeless death to the remarkable attendance at Eli’s funeral, almost every moment of this episode hit me like really good fiction should.