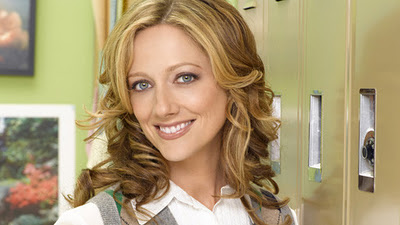 Miss Guided (airing back to back on Thursdays on ABC) is an average sitcom. It is good for some laughs (the second episode in particular is very funny) though it is also a bit too broad and predictable to really make an impact. What Miss Guided does do, however, is give a leading role to a most deserving funny lady. The hilarious Judy Greer has played more sidekicks and minor roles than someone as talented as her should have to. Like her 27 dresses co-star James Marsden, Greer has had some show stealing performances in her years and is often the most memorable person in a movie or TV show but is almost never the star. With Miss Guided,that is changing. She is the obvious star and her portrayal of misguided (get it? it’s clever, no really it is!) guidance counsellor Becky is thoroughly charming. The rest of the cast is fairly good though Chris Parnell is over the top as the narcissistic vice principal. The highlight of the first 3 episodes is most definitely Ashton Kutcher’s guest role as a substitute Spanish teacher who falls for Becky- it’s really worth a watch.

Here are some photo highlights of some of Judy Greer’s standout supporting performances in Arrested Development, The Wedding Planner, Elizabethtown, 27 Dresses and 13 going on 30.