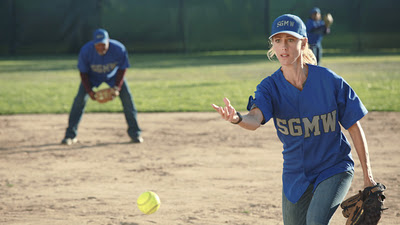 Most people gave up on Grey’s Anatomy years ago. Every single one of them was wrong to do so. The Shonda Rhimes medical drama has gotten better and better since the epic slump of seasons 4 and 5 to become the well-paced, consistently engaging, excellently cast tragicomedy it is today. While the drama is still melodramatic, the characters are much more richly drawn than they used to be, a lot more mature across the board. But where the series has really been excelling of late is in the comedy. It doesn’t take itself too seriously, a welcome relief after so many years of behind-the-scenes drama and “emotional’ ferry crashes. Last week’s fantastic tribute to the men of the show (seriously, the women barely appeared at all) was stellar, but this week’s classic return to form was every bit as good. Here’s a sampling of some of my favourite things Grey’s included this week:

– Teddy Altman. The best cast addition since Hunt’s heroic season 5 entrance, Teddy has quickly become my favourite female character on the show. She’s smart and feisty, funny as all get-out, tough as balls and a complete empathetic softy at heart. One of the few true teachers at Seattle Grace, Teddy’s quest to bring out the greatness in Christina has been a joy to watch, I’ll be sad to see it come to an end after this week’s breakthrough. But her romance with her new husband gives the excellent Kim Raver plenty of story to tell.

– Company softball. Hyper-competitive people who are inexperienced athletes make for the most entertaining of softball players. So a company of distracted surgeons led by their former marine Chief of Surgery on half an hour practice was a hoot and a half. Add in two outfielders who spend their time drinking, cloud gazing and gossiping and you’ve got a recipe for one hell of an episode. Almost every workplace show has done the tournament, and every time it’s a winner.

– Heroic Karev, especially the unsung heroic Karev. The brooding, sarcastic grump is one of the few remaining original characters and a longstanding favourite here at My TV. He’s also easily the most heroic of the many heroes in the hall of Seattle Grace. He’s always doing the right thing, helping out on the sly, putting himself on the line for people he might not even like very much and certainly isn’t often nice to (which is what made his betrayal of Meredith at the end of last season so shocking). As he surreptitiously (and riskily) helped out Meredith, Derek and (most notably) Zola this episode, Karev proved that his heroic side isn’t going anywhere any time soon. And true to form, only the audience knew he did anything at all.

– When Lexie’s a good doctor. The neurotic ingenue with terminally boring (not to mention repetitive) romantic drama is an incredibly capable surgeon with a photographic memory. As Shepherd’s new resident she’s finally getting a chance to play that a little more. Then she hit Sloan’s new girlfriend with a softball, but Rome wasn’t built in a day.

– When Callie does badass surgeries like reconstructing hands. I’ve always loved Callie, she’s been a favourite since the moment she showed up- big, weird and in love with the wrong man. Callie’s a badass, whether she’s standing up to her dad, dancing in her underwear, having wild sex with her platonic best friend in the on-call room or breaking bones for a living (literally). In episodes like this, where her oft-underappreciated specialty gets its proper highlight, she’s particularly badass. Callie rebuilt a hand this week, what did you do? Yeah, I thought so.

– Scott Foley. I love me some Scott Foley, always have. He’s just the cutest, sweetest, funniest Mr. Good Guy ever. Since Felicity demonstrated her horrible taste and picked Ben over Noel, Foley’s been bringing the adorable to more shows than I can count. His latest role, as Teddy’s monumentally ill new husband/Bailey’s clinical trial patient/Seattle Grace’s softball coach, is a definite winner. The writing win that saw him emotionally manipulating Teddy out of pitching, “Is this really how you want to spend our last few moments together?”, is just the sort of morbidly funny irony that makes the character great. He’s so great, in fact, that there’s no doubt in my mind that Shonda will have him dead probably in this season’s finale. Oh the humanity!

and finally, my last obsession that made an appearance in Grey’s this week is…

– Inspirational speeches. Especially sports-related ones. Particularly when delivered by Kevin McKidd. And when they’re undercut by the listeners and the admission that they have no hope of winning the game, they’re even better.