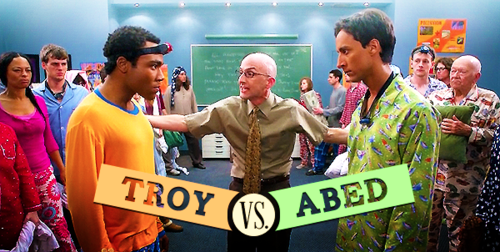 Pillows and Blankets: A Documentary of War

Last night’s installment of the close-to-cancellation cult sitcom Community was the first in quite some time that reminded me why this show deserves another season.

Community was once a groundbreaking show, the most innovative and cleverly constructed on network TV. But with the exception of a few highlight episodes (the Taran Killam-guesting Christmas episode, for one), the past season and a half have been simply good, not phenomenal as the show once was. Would I miss the show if it left? Sure, of course I would; but as long as Donald Glover and Danny Pudi were able to get replacement jobs, I wouldn’t have been all that broken up, because that spark of self-aware oddity that had made Community special had faded.

Community’s exclusion from the NBC midseason schedule caused a youth-quake, it being the only show that every discriminating and forward-thinking 20something can seem to agree on. The result was its quick reappearance in NBC’s legendary Thursday night lineup (annoying replacing Parks & Rec instead of the far-more-middling Up All Night, but at least it was back). The beloved quirk-ball of a show came back stronger than it’d been for most of the season with solid episodes that focused on the central characters and their relationships over the hijinks of shallow joke-machines like Chang. Those few episodes led to last night’s season highlight: “Pillows and Blankets”.

Back in season one, the episode “Modern Warfare” put Community on the map for its enlightened sendups of cinematic convention. The second season reprise of the concept fell predictably flat and the thinking was that Community had peaked too early. And on the warfare front, it certainly seemed like it had. World-view sendups like the genius “Messianic Myths and Ancient Peoples” and goofy satires like “Abed’s Uncontrollable Christmas” were great, but it wasn’t until last night proved that the show could revisit and improve on old territory that it felt like they really earned a fourth season. (Which should be their last, college shows should be 4 years and out; that’s just what makes sense).

“Pillows and Blankets” was the second half of a two-parter that explored the fundamental flaws in Community‘s most popular and intriguing relationship: Troy and Abed. The two best friends seemed to be polar opposites in the beginning and each of their inherent shortcomings and insecurities had lain dormant since they’d bonded at the hip to become a goofy, imaginative and fiercely loyal entity. Abed’s undiagnosed aspergers (he and Big Bang‘s Sheldon Cooper are the most famous somewhat-irresponsible-but-well-enough-written-to-be-funny sitcom representations of the syndrome) led him to disregard Troy’s ideas from the very start and the last straw came when hyper-sensitive Troy wanted to build a blanket fort that would break the world record in place of Abed’s more labour-intensive pillow fort, and Abed thoughtlessly rejected the idea. In true wackadoo Community fashion, the altercation led to an all-out pillow war between Blanketsburg (led by Troy) and Pillowtown (led by Abed) with every student in the school taking a side. The exceptions were Annie (who played the nurse), Brita (who attempted to capture the event with her bad photography skills), Dean Pelton (who tried to stop it) and Jeff (who didn’t care at first, urged both sides on in the middle, then facilitated peace in the end).

There was lots of comical silliness, as there always is, but it was the underlying motivations and innovative form that set this episode amongst the best in Community‘s storied 3-year history. To play on the same themes that were so excellently played on in “Modern Warfare”, but with a new angle, the show presented the story of “Pillows and Blankets” in the form of a war documentary, calling to mind a groundbreaking episode of MASH that did the same, but with, you know, actual war and stuff.  The presentation was earnest and serious, rendering the comedy all the more ironically amusing (especially when the stoic Morgan Freeman-like narrator quoted text messages and facebook statuses as historical sources).

Underneath said insightful and ironic presentation was a layer of absurdity that had ballooned from the honest human origins of the story. The disillusionment of Troy and Abed’s friendship lent real stakes to the “Pillows and Blankets” war (albeit not life-or-death stakes, but certainly high ones on a very personal level). *spoiler alert*. Exploring the troublesome power dynamics in the friendship, the war escalated when Abed sent a cruel email outlining all of Troy’s failings and insecurities (a heartbreaking use of information Troy only shared with the person he trusted most) and Troy replied with the statement that Abed would never be able to find another friend (which is true, but… Ouch). Their climactic battle in the school cafeteria was fought with pillows, but still sort of hurt. When the two armies lay down their weapons, Abed and Troy remained, smacking each other with pillows after the conclusion that “whoever wins gets to keep the apartment” and their friendship was officially over. The realization that the reason they won’t stop fighting is that “it’s the last thing [they’ll] do together” is nothing short of heartbreaking, but the resolution that follows is cheaply easy. In such a fascinating exploration of complicated friendship dynamics, for peace to come with just a small revelation from Jeff feels a bit like a short-change.

An episode tag featuring Troy and Abed back to their usual selves had me wondering if there was any point to the war at all, if the two men now stood on more even ground than where they started. I hope they do; I hope the great episode moved Troy and Abed forward in their relationship and as individuals. But I fear that it didn’t, and like most war, it rendered them hurt and no further ahead or closer together.