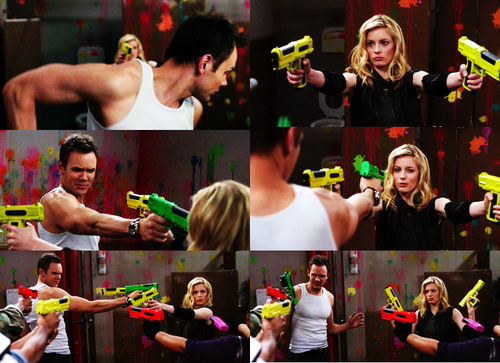 As an unabashed fan of both bad action films and Joel McHale’s biceps, this week’s episode of Communitywas always going to be a hit with me. However, the show really knocked it out of the park by anchoring it in the kind of plot-moving emotional relevance that few shows can pull off with this sort of gimmick (in fact, only “Once More With Feeling” springs to mind).

The gimmick this week pushed by the always meta-writing staff at Community was that the campus of Greendale devolves into an action movie when the Dean sets up a spirit building paintball game and offers “priority registration” as a prize. As a girl who had to sit through her fair share of annoying 100 lectures because she had a last name that guaranteed her a shitty registration time, I can relate. It was just on the right side of absurd to see the whole campus go gaga for it.

The parody was spot on, the direction of the episode so good it truly could have been an action movie, and the comedy was subtly infused in every scene. It worked even if you didn’t understand that the roller blading badasses shooting at Jeff, Shirley, Britta and Abed were a reference to 1980s feel-good film The Warriors.

As for the Jeff and Britta stuff, it felt so good, unforced, and funny that while I still think they should avoid making them a couple for fear of Community becoming the Jeff-and-Britta show, I’m totally okay with the idea of them just having casual sex in the study group room. They’re both the kind of slutty romantics who would do something like that before realizing that they are nowhere near ready for it to continue. Although it may just be that anything that gets Jeff into his boxer-briefs (and was it just me, or were those the same ones he was wearing in the pool episode?) is a-okay by me.

All in all, not only the best episode so far of Community, but probably the best half hour of television this season, period.