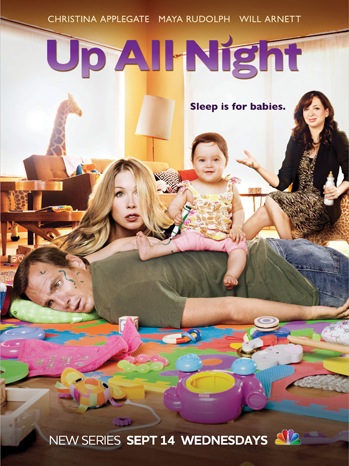 Pilot Watch: Up All Night

I had a lot of goodwill going into the pilot episode of Up All Night. All three major stars of the show (Christina Applegate, Maya Rudolph and Will Arnett) are hard working, seriously funny actors who deserve a hit (especially after the disappointments too often suffered by them). And the premise was a fun twist on standby tropes. It looked at the phenomenon of slightly-later-in-life parenting.

But I’m still surprised how much I loved it. First and foremost, I loved Christina Applegate. Her character Reagan was a hard drinking, totally fun television producer. Her relationship with her lawyer husband (as told in the pilot by montages and flashbacks, mainly) was all about extending the good times they had together. And Arnett and Applegate have fantastic chemistry. In any show that’s going to ask you to follow the life and times of a couple, you need to instantly believe in them, and Arnett and Applegate sell that.

Even better is Reagan’s relationship with her offspring. Applegate brilliantly captures the mixture of fear, love, excitement and just the tiniest bit of resentment that this awesome woman feels at having to mix motherhood, working, and a personal life. It’s nothing new, but it still feels fresh.

Mostly, the fresh feel of the script comes from taking quality comedic actors and pairing them with language and situations that feel authentic. From Arnett’s stay-at-home daddy malaise, to the genuine pull and tug that carries Applegate to and from the office, this show has managed to craft familiar characters with top notch writing to make for a definite must-see on NBC Wednesday nights.