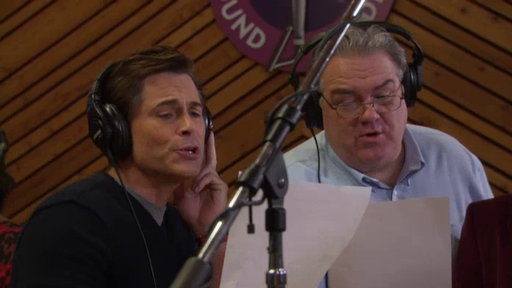 Andy’s rousing campaign ditty has been stuck in my head since I watched Thursday’s truly phenomenal episode of Parks & Recreation, and probably will continue to be stuck there for many hours to come. I know, I know, I’m getting repetitive with my exuberant love of this show, but it’s gotten to that point where I can’t stop myself from writing its praises. You know when you watch season two of The West Wing and leave each episode saying “man, that’s a good show”, because you can’t seem to remember ever encountering television that smart, affecting and heartfelt? That’s what Parks & Rec has been up to this season. I thought last night’s Big Bang Theory was fantastic (I love you, Amy Farrah Fowler!) and chuckled my way through 30 Rock‘s oddball Batman homage, but Parks & Rec was the sort of great that had my toes tingling and people knocking on my door asking what all the belly laughter was about. It’s simply the best television has to offer- past and present.

The genius of the episode showed up on two fronts. First of all was the Mouserat recording session wherein golden-hearted screwup Andy recruited all of Leslie’s Parks & Recreation Department co-workers to help record her campaign song. While Andy fretted about making the recording great (complete with fantastically bad vocals from one Mr. Rob Lowe), April helped Ron to cover up his double life as a smooth jazz saxophonist (she’s at her best when she’s on the Ron defensive) and Tom attempted to woo Ann into a second date (which was absurd and hilarious and bizarrely touching- “now I’ve got the sniffies”). Meanwhile, Leslie and Ben attempted to secure the police department endorsement while coping with Ben’s crippling fear of police officers (brilliant, hilarious and oddly understandable) and the unexpected return of Leslie’s ex-boyfriend Dave (the always-great Louis CK delivering the most wonderously specific character writing in guest star history). The whole thing was inspired, but not in a flashy way, sweet without being cheesy and truthful without being style-less. There’s nothing quite like Parks & Rec.

Here’s the video for “Catch Your Dreams” featuring footage from the recording session and campaign events from earlier this season.