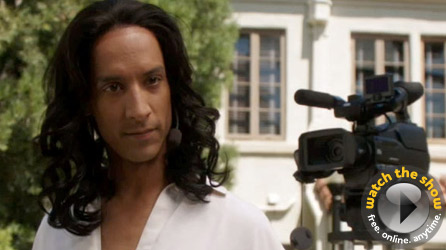 A lot of people spend a lot of time (and a lot of time on TV) trying to say something about God. And faith. And religion. And everything else. Few ever actually manage to say anything.

The sad reality is that no one will even notice the incredible power of this week’s Community, it’s not a “powerful” show (a theory not even remotely true, but somehow prevalent in critical circles anyway). Much will be made of Glee‘s “Grilled Cheesus” episode a couple weeks ago while Community‘s “Messianic Myths and Ancient Peoples” will join the vault of “could’ve changed your mind but you didn’t bother to watch” genius episodes.

The story was about influence, meta-film, art, mob mentality, PR, narcicism, carelessness and, yes, faith. It was an examination of modern religion and the follower impulse, the massive and dangerous influence of leadership, and the sometimes obtrusive way art and artists can inhibit reality. It was also about a young community and how popularity grows and resets the standard for “normal” and “acceptable” in that community. It was about fame and desperation to be near it, share a piece of it. It was about spinning out of control, getting carried away, and not knowing your way back. And Shirley, Shirley’s story was about the desperation of being powerless against something you feel is wrong and about being willing to look like the villain in order to be the hero. It was about admitting when you’re wrong, humbling each other and trying to say something.

It was about all sorts of things, things with the power to infuriate and enlighten. But then again, Community isn’t a “powerful” show, who knows if anyone even noticed. Post a comment if you did.

“I don’t believe in God, but I love me some Abed” -Britta.

PS: The wonderful role reversals and clever playfulness of Pierce’s storyline were also remarkable, and hilarious. And that tag was pure genius. Any other week I’d be writing paragraph after paragraph about them. But this wasn’t just any week.