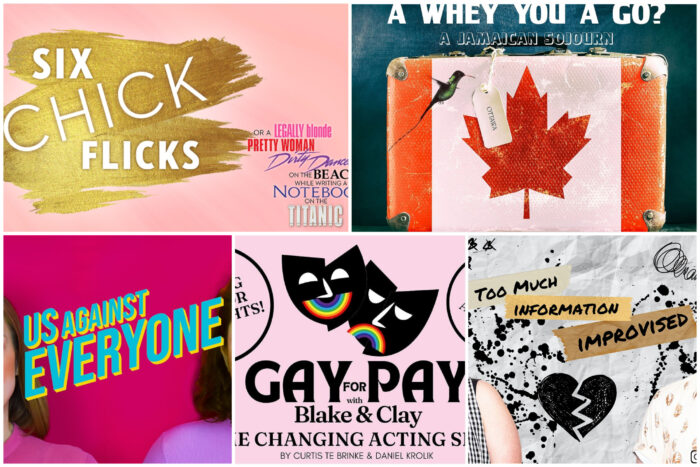 In Gay for Pay, noted gay actors Daniel Krolik & Jonathan Wilson play less noted gay actors Blake and Clay who are teaching a seminar to straight actors aspiring to play gay roles. It’s an excellent comedic conceit, even better when it starts to break down. Blake and Clay take the audience (a diverse group silently playing the role of a homogenous hetero one) through a brief history of straight men playing gay and outline the various scenarios one might encounter when playing a gay role, including fondly remembering an aunt and dispensing sage advice to hairdressing clients. Krolik & Curtis te Brinke’s script has a light touch and sharp edges (there’s an AIDS joke right off the top that will smack even the sleepiest audience to attention) and when Blake and Clay start to let their real feelings invade their carefully planned and sardonically distanced presentation, the real complexity of the play’s simple concept rears its head. There’s more to the piece’s central question than is it appropriate for straight actors to play gay roles, it’s about the performances these men are required to play at all times- they’re too gay, they’re not gay enough, did they miss their moment when whatever and whomever they are was just ok? One of a pattern of shows this festival that touches on our culture’s propensity to tell absolutely everyone that they’re doing it wrong, Gay for Pay deftly questions how identity is presented, judged, and forever found wanting.

On tour from New York, KK Apple and Kerry Ipema are dynamic, multifaceted sketch performers with great chemistry and killer dance moves. Over the course of an hour, they recreate the plots of six classic chick flicks with the help of wacky wigs and the occasional musical number. The parody element is fun and the critical analysis of problematic elements of male-written films like Titanic and Pretty Woman is valuable if a little predictable. What works best is the re-contextualizing of films that live superficially in our cultural memory, namely Dirty Dancing. Remembered for its iconic dance scene and a few famous lines, the actual plot of Dirty Dancing hinges on abortion access. This sketch show was written in 2019 but Apple and Ipema make sure to take a beat to acknowledge how that story hits differently in July 2022. A better balance of good and bad films would strengthen the commentary element and better avoid the misconception that nearly all female-oriented storytelling is inherently silly. They’re rare but the few jokes about what the films do well (Johnny’s lack of judgement of Penny, Emmett’s unentitled support of Elle) are just as funny as the criticism. But those criticisms are still valid, and important, and funny… except the Titanic door thing because the issue was weight not space and you all need to just let it go, like Rose did ;)

Too Much Information (B)

This charming improv show by Steph Haller and Paddy MacDonald could use a more concrete structure that leans more strongly on their excellent hook. Ex lovers who never really talked through their messy breakup, the nature of the performers’ relationship gives this show higher stakes that are hard to earn with improv- real emotion and personal consequences, you can’t fake that. Haller and MacDonald are both very likeable and casually funny but their scenes come off as a little random in between monologues about the relationship. At one point, they ask the audience if we want to ask them a question. They say we can ask anything we want (“that’s where the ‘too much information’ part comes in”) but the audience at my performance was too tentative to ask the difficult questions and we only got the one shot. I’d love to see a version of this show centered entirely on this conceit- ask us anything and we promise to tell you the truth, even if we’ve never told each other before this moment. I wanted to see more improvised scenes where Haller and MacDonald play themselves (or each other!). Their dynamic is fascinating but in this current iteration, it’s just a hook, not the show itself.

A Whey You A Go? A Jamaican Sojourn (C+)

The story being told in Jennifer Merchant’s solo piece about a Jamaican immigrant finding her identity as a Canadian and an artist is a worthy, vibrant tale and Merchant is a charming, understated storyteller. The concept of flipping between first and third person narration (including the accompanying accent shifts) is an interesting one but it requires a level of precise execution that Merchant just doesn’t have. With very stilted direction and clunky script construction, Merchant has very little opportunity to relax into the material and lean on the conversational style that makes her relatable. This is never more evident than when she loses her place in the script, something that happened multiple times during her second performance. Less formality in the piece as a whole would have allowed her to improvise around these moments and ease herself back in. As it is, she’s forced to just stand awkwardly until she’s able to pull the right next word from the back of her memory. Merchant is a performer who feels easy to connect to but the construction of her play builds a wall that’s difficult to scale.

Us Against Everyone (C)

This company was plagued with Covid issues in the run-up to Fringe, missing key rehearsals and even having to delay their opening. Considering this, it’s remarkable to be able to say that they appear to be one of the best-prepared companies in the festival. Movements were sharp, cues were picked up, and not a single line was obviously missed (a sad rarity at the Fringe). But it feels as though there were too many cooks in the kitchen, and they couldn’t for the life of them decide what kind of food to make. The tone of the piece is all over the place with some performers playing for big satire and others totally straight. The staging has moments that pull it towards the surreal but mostly it’s pretty conventional, which would be fine if the performances were more emotionally believable and the script was more grounded. The play’s attempts at no-easy-answer ambiguity come off as every character being equally unreasonable and the central relationship isn’t established enough early on to ever seem worth saving. The over-the-top parodic elements undermine the more realistic criticisms of the Hollywood system and make the whole piece seem naïve. Picking a perspective and a style, in either direction, would make all the difference here. If it’s a surreal critique of commercialized art- lean in, make it weird, give me big wigs and plastic surgery and Hollywood as Hunger Games. If it’s a grounded dramedy about friendship, integrity and compromise, don’t give me symbolic running and a stuffed dog. I’m not totally sure what Us Against Everyone is trying to say but they definitely don’t say it clearly.