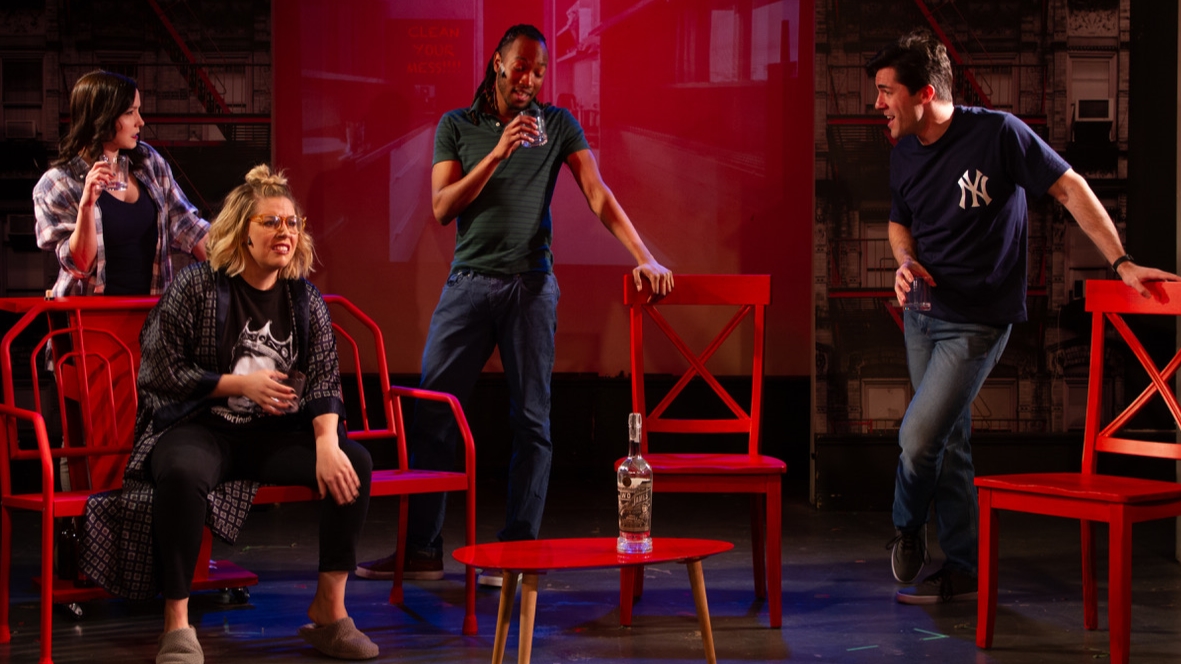 Likeable but slight, Love Quirks at AMT Theatre is little more than a tease. Despite spirited performances and several successful numbers, Love Quirks frustrates due to an under-baked plot and inconsistent vision.

Love Quirks is the story of four thirty-somethings who live (mostly) together in New York City, navigating heartbreak, sex, and the nuances of their relationship. Stephanie (Lauren Testerman) is going through a divorce, Chris (Matthew Schatz) is newly single after his fiancée cheated on him, Ryan (Erin Lamar) is a serial dater who can’t commit to his new man, and Lili (Maggie McDowell) is struggling to move on from an old boyfriend. These are familiar scenarios that yearn for a fresh perspective that remains unfulfilled.

The most glaring issue with the production is the book, which often does not feel finished. Threads are introduced and quickly unravel: two rings are featured at the top of the show (and on the program), but one is not mentioned after the first act. Other conceits seem out of order. In one of the funniest sequences, Stephanie visits a (terrible) therapist who suggests she finds herself a “rebound friend.” This could be a successful plot setup – and, perhaps, a superior title for this musical – but is seemingly forgotten until midway through the second act, at which point there is a rushed pivot that doesn’t earn its payoff.

Love Quirks works best when its songs directly address the audience. “Um, Yeah…” and “Hey!” feature characters dating and flirting with us and are among the strongest moments of the show. “Haven’t You Noticed?” is a genuinely fun flashback number, which could easily find second life as a cabaret duet. The rest of the score is serviceable, but at no point did I find myself humming any of it on the way home or after several listens to the cast album. Moreover, for every delightful lyrical turn of phrase, there were just as many that could be seen a mile away.

For all their good work, the actors are held back by a lack of tight vision. Some character choices that work in a vacuum seem to not quite fit with the rest of the production. Although I’m usually a fan of a director’s light touch, I often wished for a stronger hand here . At times, the thin writing provides an especially difficult hurdle. Stephanie sings, “I got married/forgetting who I was…so many changes/I floundered my dream,” but we never get any hint of who she was nor any inkling of her dreams. We wouldn’t even know her job except for nurse’s scrubs and a couple of throwaway lines.

The set design and lighting are utilitarian but generally work. Certain touches, however, serve as unfortunate distractions. A two-piece projector screen alternates shots of generic NYC exteriors with stock photos intended to establish the scene. Nothing is ever added here. Moreover, there are several incongruous details: why would these characters go on a date at Rudy’s Bar & Grill*? Why would four non-actors own an Uta Hagen book? At no point does Love Quirks feel like it needs to be set in New York. Other than sacrificing winks at a NYC audience** and losing an, admittedly, quite funny Yankees/Red Sox joke, Love Quirks could have dropped its characters into St. Louis or Kansas City – and it likely would have been a stronger show for it.

There are seeds here of a rollicking comedy, a light rom-com, and a poignant love story. With a few rewrites, Love Quirks has the potential to hum. The production in its current form, however, never synthesizes its disparate parts, and despite the winsome cast and competent score, it is unable to satisfy.

*A classic dive but not believable as Chris’ date spot

**A restaurant, Frankie & Johnnie’s, which ran an ad in the program, was name-dropped