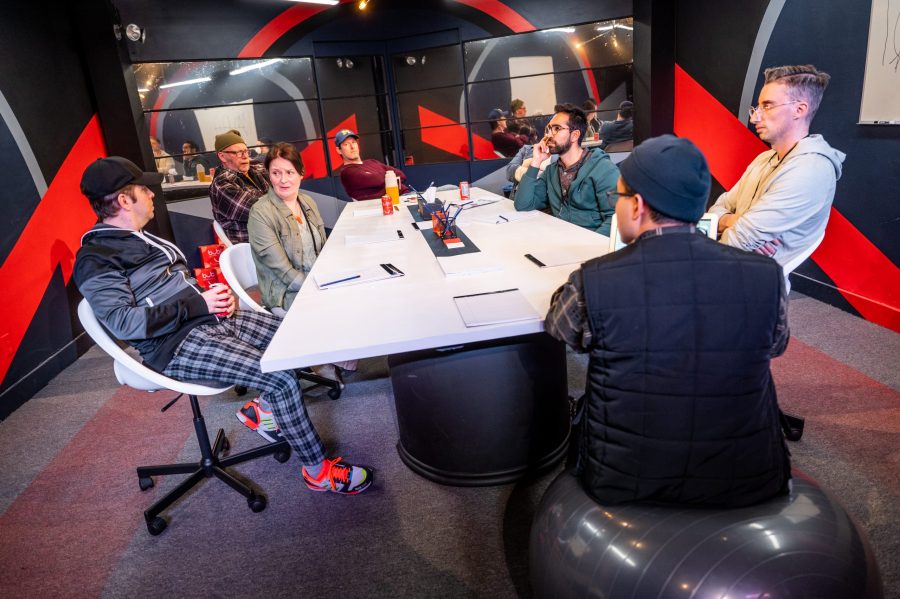 Annie Baker is good at making her stories the story. The Flick, a three-hour epic (or dirge, if you prefer) dazzled and bored audiences across North America before taking its talents to Toronto.   After an off-Broadway debut in 2017, Antipodes now prompts audiences at the Coal Mine Theatre to examine the purpose of stories – with obvious implications for the medium at large. Is this, as our main character wonders, “The worst time in the history of the world to be telling stories”?

It certainly seems like it for the characters stranded in this room with us (and an endless supply of Bubly). Grizzled mogul Sandy is increasingly preoccupied with whatever it is important executives do all day so it falls to his motley crew of underlings to find the perfect hook for… something. We never find out where we are and we are as clueless as the Danny Ms of the world about what we are meant to do – keeping this abstract makes Baker’s flirtations with the supernatural more seamless. Despite that, we know exactly what sort of place we are in. The set, lighting, and dress all work together to create a perfectly alien yet familiar vibe before anyone opens their mouth. This room has the right mix of Hollywood creative stereotypes and offbeat weirdos to make the seemingly normal Eleanor feel suitably out of place – and not just for being the only woman in the room.

As Sandy’s tribe of blocked writers desperately scrapes their own lives for stories to smuggle into their script, our first impressions are confirmed. An older man’s graphic tale of an affair gone backwards has the room hooting; Eleanor’s memory of a tender first love meets blank stares. Other stories vary from suicidal to surreal. The grand visions these are meant to inspire struggle to take shape under the looming threat of cancellation – if Sandy can spare the time to drop by and pull the plug.

In a strong ensemble of a cast, the standouts come from both ends of the office hierarchy. Ari Cohen’s Sandy bloviates at the perfect register, saying everything about himself by saying nothing. Kelsey Verzotti steals the show as his endlessly chirpy assistant Sarah, who guides the show’s shift into the surreal as crisis sets in before fully embracing it with her own dark fairytale.

Antipodes embodies the difficulty of neatly concluding a story. Without a traditional plot or structure, the show lunges in a general direction but relies on the individual scenes to offer some continuity. The sharp supernatural turn just before the end feels too sudden and rushed to stick the landing for the whole script – but also shows that the ending isn’t essential for a story to be worth hearing. If you remember nothing else from this work, carry Simon Bracken’s brilliantly lifeless cry to seize the day (and the chicken) with you.