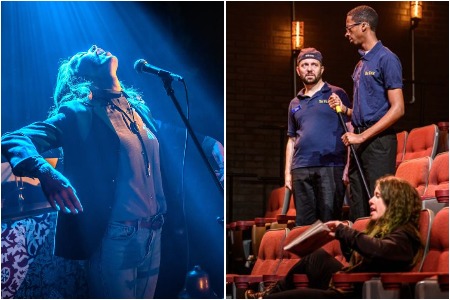 At Crows: Ghost Quartet & The Flick

A captivating pairing of co-productions has taken over the east end Streetcar Crowsnest venue this fall with a world-renowned but perfectly grounded everyman epic in the mainspace and an understated but otherworldly one-act song cycle in the studio.

The studio piece, Dave Malloy’s Ghost Quartet, is a Crows collaboration with Eclipse Theatre Company and it feels every bit as immersive as The Flick, the 3+ hour Annie Baker play esteemed immersive company Outside the March has going in the mainspace. Though both pieces thankfully allow the audience the privilege of sitting quietly and observing, impeccably detailed design work from Patrick Lavender (Ghost Quartet) and Nick Blais (The Flick) bring the audience right into the experience. The charmingly decorated lobby and movie treats for sale add to The Flick’s claim of being truly at least “semi-immersive” despite the audience’s total lack of participation, though the quietness of Baker’s playwriting style quickly proves popcorn to be a cute but terrible idea.

Both pieces sport perfectly deployed ensembles of mostly familiar faces. Ghost Quartet features the excellent Beau Dixon and Andrew Penner (who also music directs) but it’s Kira Guloien and Hailey Gillis who take centre stage as they weave their way through loosely connected songs and stories that evoke an unmissable feeling more than a really clear narrative. The two women are equally beautiful singers with strong presence but they vibe completely differently- Gillis is ethereal and bluesy, Guloien sparkly and commanding with more of a classic musical theatre voice- which gives the piece a useful sense of balance even as they bounce between too many personas to develop a consistent sense of character. Ghost Quartet is the sort of piece it’s best to experience rather than analyze; I couldn’t tell you what it was about, only how it felt.

Outside the March mainstays Amy Keating and Colin Doyle take the lead in The Flick as lost souls in the outskirts of Boston whiling away their lives as underpaid workers at an independent movie theatre on the brink of digitization. Keating and Doyle are both incredibly easy to like in pretty much any role, a shared quality that comes in handy here as they play sympathetic but variously deeply frustrating characters. Much of The Flick’s success balances on Doyle’s ability to make the audience’s heart break when his does and, when Baker’s genius precision with words sent me into a frenzy of resentment towards self-involved projectionist Rose, it was only Keating’s warmth and the memory of her stirring vulnerability in earlier scenes that kept me tuned into her plight. The newcomer in the group is Durae McFarlane who beautifully balances endearing try-hard insecurity with the alienating but truly relatable pretension of someone for whom movies are everything life can’t be.

Though I don’t recall it being explicitly stated in the play, the year is concretely 2012, once a hyper-contemporary story that’s already become a period piece. Blais’ hyper-realistic movie auditorium set features a poster case that we catch in glimpses only when characters enter and exit through an upstage door. The changing posters show the passing of time while also dating the action in a very specific moment of movie history- we see Argo, an Oscar bait period drama, shot at least partly on film, that both participates in and is in some ways about classic Hollywood tropes. We also see The Avengers, the flashy, hyper-computerized team-up flick that was just the beginning of the near total franchisation of Hollywood. The fact that Avengers actually came out before Argo and is thus shown here in confusing reverse order because it makes more thematic sense is the sort of film nerd detail I’m forcing myself not to focus on (similarly, when they play six degrees, the path between Michael J Fox and Zoe Saldana is far more complicated than it needs to be. This is not important, I just couldn’t talk myself out of mentioning it). There is something deeply poignant about a recent period piece- an honest but perhaps slightly fuzzy portrait of something we all remember like yesterday but is completely irretrievable.

Annie Baker is obsessed with silence and mundanity and the complexity of normalcy, which makes her plays inherently frustrating. They all move slowly and run long and director Mitchell Cushman honours that almost to a fault. Right off the bat, I thought the overture might never end. But the frustration is part of it. The repetition is part of it. The awkward silences when nothing’s happening except exactly what happened yesterday between people who’ve long ago run out of things to talk about, excepting the things they long ago decided to not say to each other- it’s all part of it. The Flick isn’t my favourite Annie Baker piece but it might be the most Annie Baker piece, trapping the audience into the experience of these people’s unremarkable, quiet, boring lives and forcing us to see the complication that’s nonetheless there, because it’s there for everyone. We may just be sitting quietly and observing but it’s immersive nonetheless.