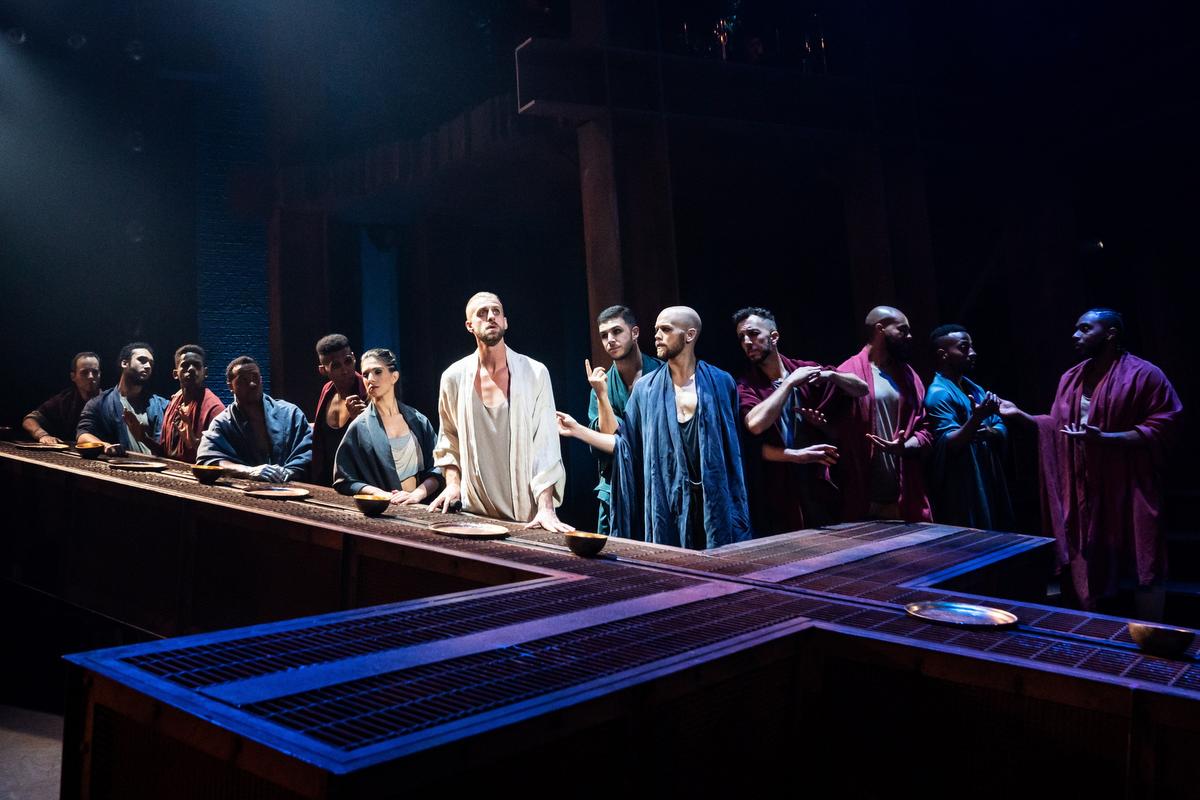 The first thing that happens in the 50th Anniversary Tour of Jesus Christ Superstar, aside from those iconic guitar riffs and the exuberant cast storming down the theatre aisles, is Judas stealing the microphone as Jesus prepares to tell his own story. Over the course of a mere 90 minutes, the mic stand that will come to symbolize a voice in the story and stardom in the production will be passed between standout players who will use it as they see fit: to amplify their perspective, to silence others, to lash out against their oppressors, to condemn that which they fear.

The Regent Park Theatre production that won the Olivier back in 2017 has been repurposed as a North American tour with a lean pandemic-cooperative runtime and a healthy disinterest in your expectations. Onstage at Toronto’s Princess of Wales until January 2nd before swiftly moving on to a brutally short two week run in Boston, this can’t-miss staging of well trod territory should be the thing that brings you back to the theatre if you’ve yet to make it there.

Under the baton of music director Shawn Gough with a small tour band, Andrew Lloyd Webber’s maximalist score has never sounded so full or urgent, and the voices in this current production are not just capable but interesting. Though every one of Webber’s showy rock-scream top notes is undoubtedly hit, often with spectacular flair, it’s the dynamics that really show off this group’s skill. The controlled pianissimo of the ensemble work in “Trial by Pilate” is entrancing, as are the moments between the great vocal thrills of “Gethsemane” when Aaron LaVigne’s Jesus merely breathes. A thematically intriguing contrast is struck, perhaps by accident, by the difference in enunciation clarity between Tyrone Huntley’s thoughtful, intense Judas and LaVigne’s early scenes as Jesus by way of mumbly rock heartthrob. Though always coherent, LaVigne allows his performance the comfort of informality in the beginning when Jesus’ emotional stakes are lower than Judas’. It’s a small but impactful technical detail that goes a long way towards shaping the character, his mental state, and his relationship to his platform. In contrast, Huntley delivers every line as though desperate to be understood, an insightful consequence of being the man standing behind the man everyone is leaning forward to listen to.

The whole production is full of tiny choices that show how completely the cast and creative team have considered the text. Some of the production’s big symbolic gestures, like the role of the silent “Mob Leader” or recurring use of gold glitter, invite academic speculation that can quickly feel trite if intentional (is Sarah Parker’s lead dancer supposed to represent Satan? Is glitter the manifestation of sin?!) but, even when they’re a little much, I’m here for any and all big ideas (for the record, my take on the glitter, at least in its “39 Lashes” usage, is that the crowd is turning Jesus into a sort of mirrorball who will reflect the light and hang for their amusement; it’s a metaphor that’s both kitschy and dark, so very JCS). I appreciate a company willing to play archeologist, especially with a show that’s celebrating its 50th year, has been immortalized on film, and never truly left regional rotation. Unearthing new truths, or at least new options, is what justifies yet another take on Jesus Christ Superstar and it’s what made this production by far my favourite of the dozen or so that I’ve seen over the years. It’s also what made it worth seeing twice, which I did (PSA: $29 day-of online rush tickets).

Ostensibly I returned for a second performance because Tues/Wed evenings and Wed/Sat matinees feature a different Judas (Eric A Lewis, a more emotional but vocally uneven Judas who is a terrific Simon on his off days) and today’s performance happened to star the understudy Jesus (Pepe Nufrio, a softer Jesus with less of a rock star edge but still plenty of spectacular notes). But the real privilege of a second showing was in spotting some of the details I missed the first time in this dense, rewarding production.

The short run time means that this production gallops with incredible momentum. The driving beat, smoothest of scene transitions, and Drew McOnie’s hyper-physical choreography (heavy on the unison for maximum mob mentality) all lend to the meaningful sense that things are spiralling far too quickly for any of the characters to have a shot at regaining control of the tragedy. The propulsion adds key tonal and story clarity and also keeps the energy up but it means the audience has a lot of information to process incredibly quickly as Timothy Sheader’s direction utilizes the full stage and full cast in nearly every scene. I tuned into his use of iconic painting tableau too late in the first performance to catch every one but I knew to watch for it my second go around. It was also on my second viewing that I was able to read all of Pilate’s fantastic tattoos and realized that the cross is fashioned from a broken speaker stand.

This last detail leads to perhaps my most descriptive of observations which is that this production is lot more rock and roll than most. Despite its rock score and concept album origin story, JCS‘s aesthetic is often more hippie than groupie and if parallels are drawn between Jesus Christ and our modern understanding of Superstar-dom as most easily exemplified in the music industry, it’s usually the latter being used to illuminate the former. This production seems to flip that, suggesting perhaps that we can use the world’s most famous story to better understand our relationship to those we put on pedestals and show up in droves to scream for.

Without totally abandoning the hippie cult-y elements that so often inform JCS (Tom Scutt’s blocky multi-level greenery-filled set looked to me a bit like a yoga retreat and the breezy monochromatic cotton of Scutt’s ensemble costumes could be described as at least commune-chic), this production is more about fandom than followers, embracing a harder rock aesthetic from after the musical’s birth and turning the characters into literal rock stars with mic stands, guitars, and even stadium lighting (brilliantly designed by Lee Curran). The effect modernizes both the sound and the look of the piece while tapping into commonalities in fanaticism between religion and culture that are as important to reckon with as they are difficult. The total recognizability of LaVigne’s charismatic Superstar with his fitted pants and high & tight hair should feel eerie to a largely secular generation who theoretically know better than to follow a prophet into the desert but weren’t totally surprised to hear that Jake Gyllenhaal got death threats over “All Too Well“.

JCS always, and particularly in an iteration that leans so hard on the concept of stardom, demands a great Jesus and LaVigne thrills from his most understated moments of quiet appeal to his most bombastic wails of anger and agony. But to me it’s the ensemble that defines success for the same reason that any actor will tell you that you can’t play the concept of “king”, it’s up to the other actors to make sure the audience sees that you’re the king. This ensemble is electric and the cast of supporting characters each make superb use of their moment at the mic.

Jenna Rubaii is a uniquely powerful Mary with a lovely, sturdy voice whom I actually believed when she claimed to usually be the one “running every show”. Alvin Crawford’s voice has a beautiful roundness that brings genuine gravitas to Caiaphas’ difficult track though Tyce Green’s steely-eyed Annas highlights nearly every moment the priests are onstage (here’s where I lament the insufficient crediting of this production both online and in the single sheet program because the unnamed prop designer who made those dual use crosier/microphones deserves a hand).

In “Herod’s Song”, a second act comic relief number I’ve always found tiresome and stunt-y, Paul Louis Lessard layers an entire world of cultural pastiche into a glam rock clown show wherein he slits the throats of his backup dancers with a machete. The song’s melodic opening teases the classical strength of Lessard’s straight vocals before he launches into a thrilling array of allusion and extravagance I’d have to see at least twice more to hope to fully catch (there’s a little Freddie, a little Bowie, a three-syllable Elvis impersonation, wait was that Rob Schneider??). Blending genuine malice with giddy delight and sheer bravura, Lessard flipped my least favourite song in the show into a true highlight I wish I could watch again and again.

I honestly wish I could watch the whole thing again and again. I’ve never loved Jesus Christ Superstar with all its usual non-actor stunt casting and tiresome “Judas was in love with Jesus!” takes. But 50 years after its debut, I feel like I’ve finally seen Jesus Christ Superstar for the lush, intense, fully felt show it’s meant to be. By daring to reimagine a beloved property, this JCS says so much about how we engage with that which is beloved.