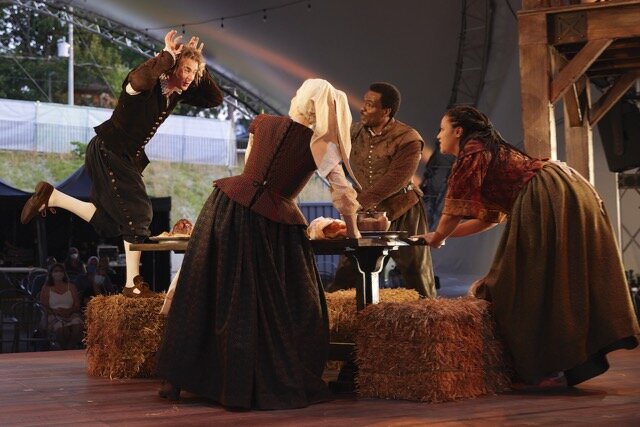 Three Tall Women
It’s difficult to separate Stratford’s fine production of this enjoyable and alienating Edward Albee play from the experience of seeing it. A holdover from the cancelled 2020 season, Three Tall Women was the lone indoor performance in the Stratford 2021 season. It was staged in the intimate studio theatre with very little distancing, which I found very confusing considering the many larger venues available to could have allowed for more tickets sold (potentially even at more accessible prices?) with more space between patrons. But it was pure joy to be back in any of Stratford’s theatres. It felt normal and normal feels so good right now. Despite falling into the company’s less-crowded “modern” field, Three Tall Women is a pretty standard Stratford production starring the most mainstay of its mainstays and yet another young actor who seems out of her depth and makes me wonder, once again, why no one from the company is paying attention to the dozens of young women in Toronto’s indie scene who could have slaughtered that role in their sleep. All the interest and innovation comes from the fact that it was performed at all, and in the smart and nervy decision to split a two-act play into a two-performance play to avoid a crowded intermission, making the production the only two-act play staged this year pretty much anywhere. It felt really special. The actual work wasn’t all that special, but the feeling really was.

I Am William
A goofy tone and outlandish final dance number give this charming piece of musical children’s theatre a bit of an absurdist edge. “His sister was the special one!” narratives were a staple of my feminist childhood literature (cheers to Nannerl Mozart!) and this one that speculates what if Shakespeare’s sister really wrote the plays comes in that tradition with smart narration from the actors breaking character to explain that, while this is fiction, it’s possible, and it’s important to imagine. It’s a sweet show, well delivered by an excellent quartet of performers, though it could use more memorable songs and more of them (the presence of Landon Doak in the cast made this flaw feel extra potent considering he’s the best young composer in the country but not the composer of this). I Am William is a forgettable lark but a nice piece of age-inclusive programming at a time when children’s theatre isn’t getting priority.