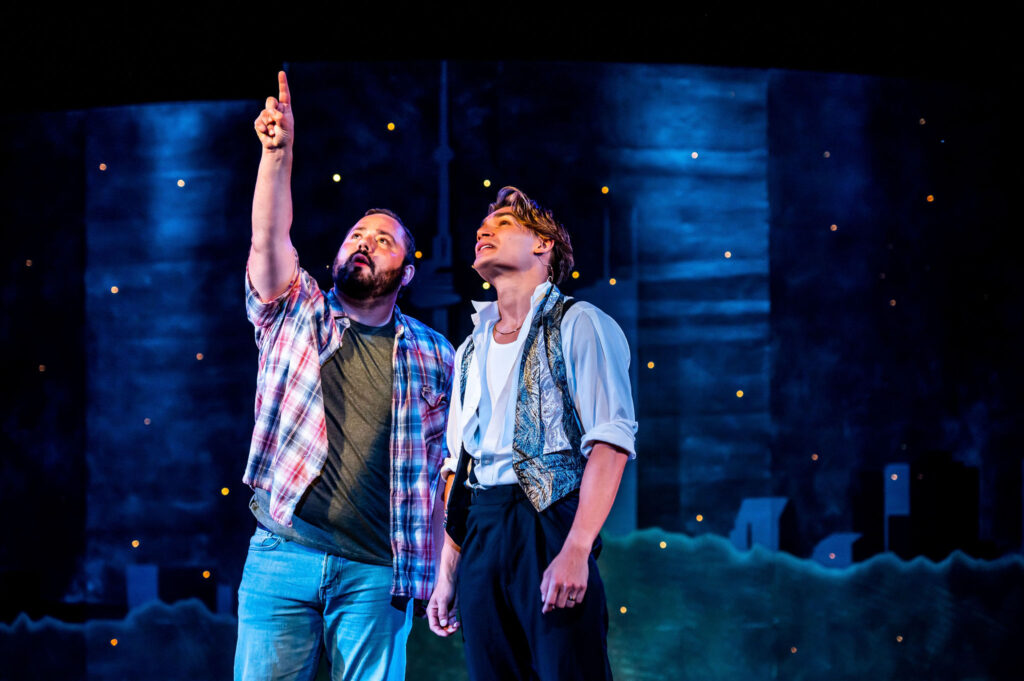 Toronto’s High Park is a theatre again. After only a few performances of socially isolated dance pieces last summer, Canadian Stage is back this season, not only filling their outdoor amphitheatre with its first real theatrical productions in two years but lending out the space to co-producers and collaborators for a season of programming that’s diverse in style, mode, subject, and creatives. It’s an inclusive move that’s both smart (sharing the burden of rehearsing and producing under tricky health regulations) and thoughtful (High Park is one of the only large-scale outdoor spaces in the city, hogging it would have just felt wrong). Right now (through Aug 15), The Musical Stage Company has the stage, which they’re using for what they’re calling a “preview run” of their new musical Blackout.

Originally slated for a full production that was postponed for Covid, this preview features a scaled-back design and welcomes audience feedback in the form of post-show questionnaires. It’s difficult to tell exactly what elements of the musical triptych aren’t yet fully formed and what’s more permanently amiss but, in the spirit of audience feedback, I’m just going to treat the whole thing as if it were fully baked (with some extra grace for set & lighting designers Brandon Kleiman & Logan Raju Cracknell whose work is sure to get a glow-up in full indoor production). Set during the 2003 power grid failure that wiped out electricity across Ontario and some of the States for two days, Blackout is a cleverly constructed trio of two-handers that moves across the city and into the night.

Playwright Steven Gallagher and composer/lyricist Anton Lipovetsky’s work is extremely mixed, beginning with broad caricature and building towards nuanced humanity. Though Chilina Kennedy’s star power (and her fun power ballad epiphany) elevate the first act about a pair of mismatched sisters, there’s little that’s particularly original in the first two stories of the musical, both leaning on easy emotion and simple tropes that are immediately exhausting while no one in the cast save Kennedy does much to lift the material. Ann Hodges’ direction is stiff and exaggerated, falling into bad musical theatre habits when the emotional content of the piece easily deserves a more naturalistic approach.

Luckily, the massive beating heart of the musical’s third act is enough to keep the whole thing alive. There’s a level of insight and specificity in Gallagher’s act three work that tempts me into saying he should scrap the first two stories altogether and further explore the ideas and people he introduces at 5am in an east end park. Lipovetsky’s repeated ballad “Shine Again” in this section is a little on-the-nose for a story about stargazing, but it’s beautifully delivered by Michael de Rose and balanced out by the excellent work sandwiched between the song and its reprise- a charming duet that speaks to the piece’s pointed geographic specificity “Summer in Toronto” and in my opinion the whole show’s best song, “Bird Like Me”. Brandon Antonio delivers the upbeat but sneakily dark show-stealer with a perfectly pitched manic energy that flits tellingly between charming and frustrating. In the odd couple pairing of de Rose’s Lenin and Brandon’s Zachary, Gallagher and Lipovetsky beautifully capture contrasting but equally honest perspectives without ever straying into stereotype to over-clarify the contrast.

While the first two acts of Blackout each centre on a main conflict or traumatic piece of information, the third act is a lot of things at once. In its short runtime, Lenin & Zachary’s story explores urban isolation, toxic standards of beauty, heteronormative expectation, the trauma of loss, and survivor’s guilt. In a musical that could easily be read as a love letter to Toronto, the third act dares to suggest that the big city isn’t always the inclusive safe haven pop culture suggests. For a small town boy who is used to finding solace in the stars, it takes a city-wide blackout for him to be able to access that “Somewhere Out There” comfort in our light-polluted skies. Blackout‘s third act reckons with hard ideas and harsh realities while never losing its light touch or optimistic eye. In exploring a meaningful encounter without needing said encounter to be romantic or life-changing, Lenin & Zachary’s story perfectly captures that single-small-moment feeling that Blackout‘s vignette structure inherently suggests but its other stories squander. Sweeping across the city as the night progresses is a clever idea but at the end of it all I just want to have spent the whole night in that east end park staring at the stars.