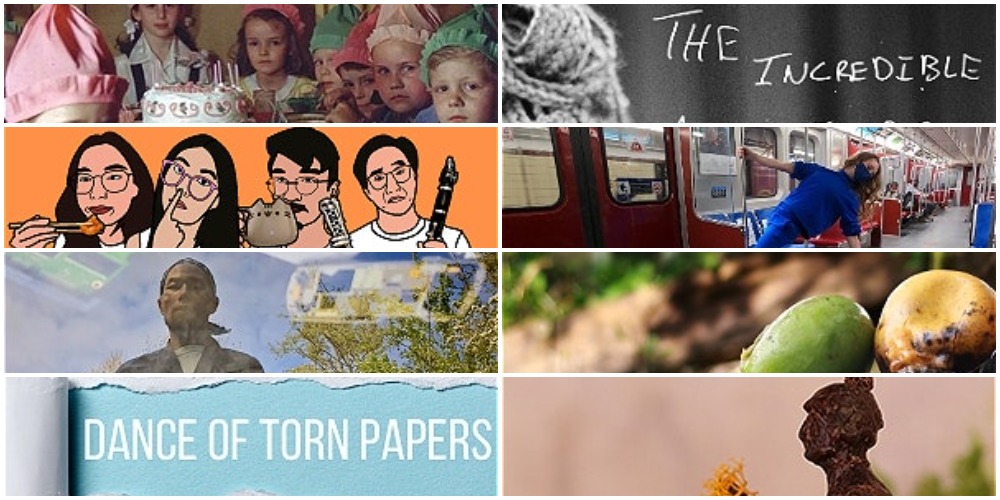 In Transit is a contemporary dance film, presented as part of the 2021 Toronto Digital Fringe Festival. Creator, choreographer and performer Alayna Kellett has devoted years of research to this piece and it’s paid off in a robust work of graceful emotion.

In Transit follows one woman’s imperfect path beyond trauma, highlighting the transitional periods between pain and peace. Set on the subway, the central figure is surrounded by an ensemble living with open wounds, confronting each other in a small, public space.

The object of the character’s trauma is never explicitly stated, rather trauma is explored as a universal. Intelligently mapped out in chapters, each given a recorded line from a traumatized monologue, the lead character’s story includes an inner, alienated life. But, there is no harping on depression. Happiness and relief are well explored recesses of loose movements and smiles, a lightness to the entire ensemble.

The success of the choreography is highlighted by the intentional camerawork, coloured by beautifully toned lighting and matching wardrobes, all of it floating on a silvery soundtrack. At times, I wished that the music was more powerful, and the use of lyrics gets in the way of a more forceful musical composition. Still, the emotion in this piece is well-crafted and precisely deep-cutting.

In Transit is a beautiful marriage of stage and film, guiding the audience through a vulnerable topic with mesmerizing ability.

In Transit is playing on demand at the 2021 Toronto Digital Fringe Festival.

The Incredible Adventures of The Nice Canajun Girl
(Eclectic Encounters)

The Incredible Adventures of The Nice Canajun Girl is a solo show written and performed by celebrated actress and singer dTaborah Johnson and presented at the 2021 Toronto Digital Fringe Festival. Set in a bare studio and filmed in black and white, this show invites the audience into the fragmented memories of a fearless performer.

Johnson begins the play by promising a “scrapbook of her life,” highlighting some Hollywood names and experiences. Still, as the 40-minute show progresses, we’re taken into deeper territories, learning about her life as a mixed-race woman in Canada and the vulnerability lessons she’s known as she’s aged.

Johnson is a brilliant presence on camera, speaking and singing with an easy intimate connection to the viewer. Her command of the space and the reach of her smile give breath and recess to the text, which scats and poeticizes abstractedly, carrying us away from the core narrative. The piece is non-linear, creatively mapped, with a loose plot that’s hard to follow, but Johnson, as a lovable character, keeps the viewer close to her. She sings the blues, she speaks in life’s lessons without blame, and through that, a life narrative builds. A saxophonist in the background, the rhythm of her cane against the floor, it’s a choppy flashback, guided with the smoothest of sounds.

The Incredible Adventures of The Nice Canajun Girl  is an intimate storytelling experience, giving soul and honest reflection to a backdrop of collected uncertainties.

The Incredible Adventures of The Nice Canajun Girl is playing on demand at the 2021 Toronto Digital Fringe Festival.

Orange Chicken opens with an animated short about William Shakespeare performing at a contemporary poetry open mic. I laughed so hard when he was booed off-stage, I could barely recover before the next sketch. From there, the show weaves into a courthouse ruled by children, a late-night dinner at Fran’s, a satirical zoom-meeting with a school music program, and, my personal favorite, a musical number about a Foodora courier in space.

In between the humour, the show cuts deep into the blanket we throw over tiny topical problems such as “How do we teach music via zoom” or “why is the work of an old White poet still the most prominently produced work in Canada?” But, overall, the discussion of racial insecurity is met with brilliant fun and, even though some sketches don’t land as well, comedy and music mostly outweigh and enhance what’s awkward.

The collective is entirely Asian, the creators and performers Sumeeta Farrukh, Shreya Jha, Wilfred Moeschter, Nam Nguyen, Nightingale Nguyen and Gabby Noga are equally funny. The animation by Nan Nguyen is almost the star of the show, diversifying the delivery of the piece and making it easier for a digital theatre audience to enjoy.

Orange Chicken: A Sketch Show is an impressive comedy, offering laugh-out-loud performances, compelling animations, and a humorous window into the Asian Canadian experience.

Orange Chicken: A Sketch Show is playing on demand at the 2021 Toronto Digital Fringe Festival.

Birthday Present tells the story of a young man and the sex worker who visits him on his birthday. As she stoically prepares to leave, he frantically monologues about sex work, womanhood, and female obligation. Though the character is desperate to have this woman stay, the text is aggressively self-involved. The performance evokes a Gene Wilder-like enthusiasm for righteous mischief, negating the emotional stakes of the scene.

In a deeper exploration of pain, Mother focuses on a woman in hysterical grief as she relies on her mother’s post-mortem presence to motivate her survival. Here, the performances are stunning, moving the lead female’s story from chaos to a relatable unsteady relief.

The two shows are linked thematically through the topics of love-loss and loneliness, both gifted with an existential twist. Each lead character is dramatically let down by their expectations, beckoning for help from a woman who isn’t really there. Despite a solid aesthetic clash between the separate pieces, they tie together thematically into a well-designed double bill.

The video is 360° immersive, meaning that the viewer can pull the screen, manipulating the point of focus. The intention is to give the audience control over where they’re gazing, “just like you would in a live performance!” Unfortunately, the effect is distracting, and at times frustrating. Overall, I didn’t need the 360° immersive to feel like I was in a theatre because there weren’t enough well-produced film elements to transport me away from the stage. The camera work is of “home video” quality, the performances are stage-worthy but somewhat awkward on film, and the film doesn’t use sound or light to further the story-telling. Sadly, the 360° immersive works against the piece because, as an audience member, it is less easy to take in nuance and more challenging to access the story.

Dance of Torn Papers is an exciting exploration of topical desperation, lacking film production polish but featuring some stellar performances.