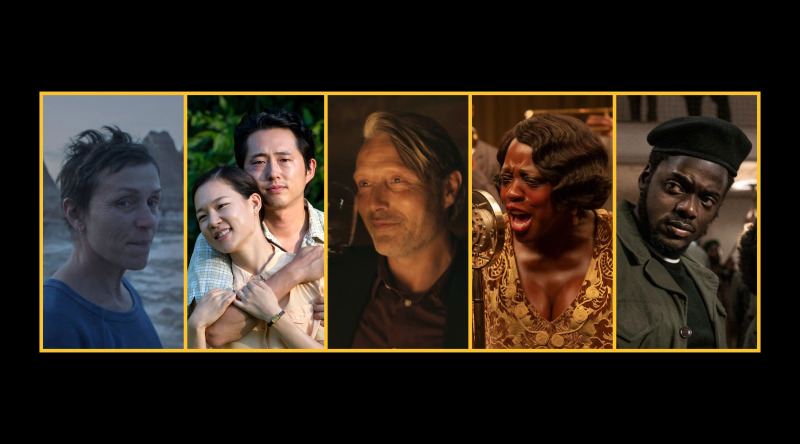 The Oscars Are Still Happening

In 2020 I saw 5 new release films in a real movie theatre. In a regular year, I would see on average 100. Always in the movie theatre. I love the movie theatre. I don’t have the attention span or the patience to watch a movie at home with the ability to pause or check my phone or tell the person sitting next to me what I expect to happen next. The movie theatre is the point; the meditative process of sitting silent for two hours is important for me, someone who talks nearly constantly despite spending the majority of time alone with my dog.

But this year I couldn’t. I managed to get to the theatre 11 times before lockdown hit and twice during the summer of eased restrictions and distanced seating but I only saw 5 new releases: The Photograph, The Gentlemen, Emma, The New Mutants, and Tenet. Not exactly a banner year for me at the cineplex.

None of these movies were particularly good (The Photograph and The Gentlemen were both acceptable I guess). Still, somehow, there are some Oscar nominees in there. Tenet, which I despised, is up for production design and visual effects, which I guess makes sense even if the storytelling is straight shite. And Emma‘s up for costumes and makeup/hair, which is far more than it would have gotten if there’d been a normal number of films released this year yet I’m reminded of this all-time-great tweet from @ThedaneMcdonald about Little Women winning that category last year.

But, those below-the-line nominations aside, take the cineplex out of my life and movies kind of go with it so for the first time in my entire adult life I find myself having seen almost none of the nominated movies. Most of the top contenders aren’t available on the major streaming services, leaving audiences still in lockdown zones the choice of paying high on-demand prices or missing it altogether. But even if I had the money to pay to see Nomadland, Judas and the Black Messiah, and Minari (the three I’m most horrified to have missed thus far), I don’t want to watch them at home. I’ve been thinking a lot about Rome and how bored I was, how many times I paused, how much I missed, because I wasn’t in the attention-forcing environment of a real movie theatre.

The only two real Oscar contenders I’ve seen are Ma Rainey’s Black Bottom and The Trial of the Chicago 7, both available on Netflix. The former is an adaptation of a great play but it’s only a so-so film. If I was a betting person, I’d be all in on Chadwick Boseman to win Best Actor but I was sure of that before I saw the movie. I was actually sure of that before he died and genuinely think he would have won even if he was still here. Because Levee is that kind of role (heck, we gave an award to the guy in that role when we saw the play too). Viola Davis isn’t a bad bet either but it’s a small role that should probably be listed as supporting and Best Actress is strong this year (or so I’ve gathered, I haven’t seen any of the other movies! Ugh).

The Trial of the Chicago 7 is a delight but it’s an oldschool movie that should likely be buried by the more refreshing voices that surround it (though I still think Redmayne deserved a nom and I have a very hard time believing freaking Gary Oldman deserved yet another one). Sorkin is an Academy darling and always a threat to take home Best Screenplay and funnyman Sacha Baron Cohen’s serious all-in performance would have a real shot in any other year but Supporting Actor is absolutely insane this year with both leading actors from Judas and the Black Messiah mysteriously listed as supporting (LaKeith Stanfield Is Nominated For An Oscar!!!! Guys, this is very big news for my faith in humanity). Long story short I could see it taking up to two trophies but more likely zero.

I’m still making my Oscar rounds and I’ll surely suck it up to watch as much as I can, cineplex or no, before the big day. But to me 2020 will always be the year without movies. The Oscars, though, the Oscars are still happening.