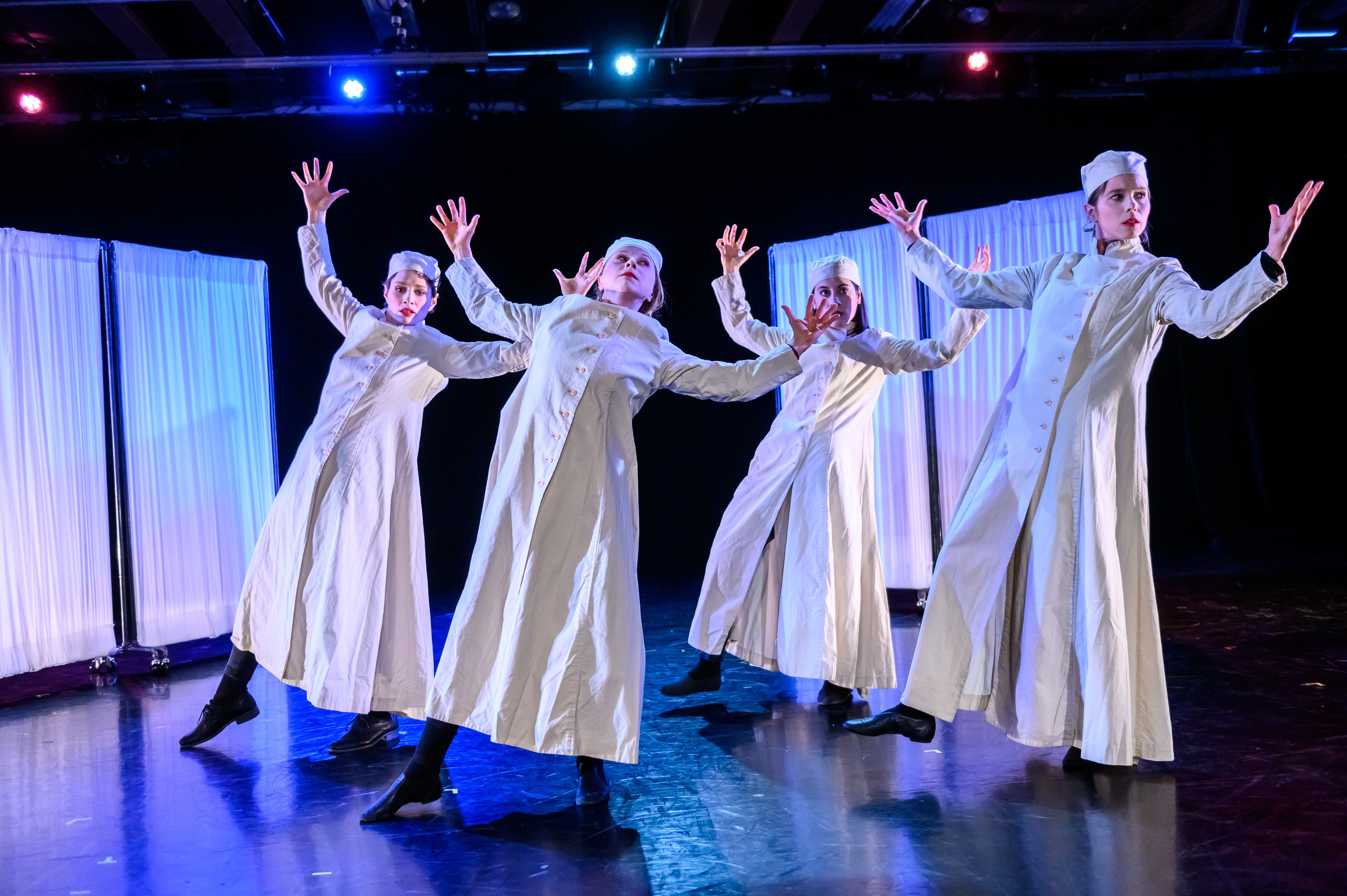 LUCID LUDIC & Why Not: BRAIN STORM

After a stellar workshop presentation at the 2017 Fringe, BRAIN STORM returns to Toronto with its world premiere at the intimate Dancemakers Studio Theatre.  An innovative performance, BRAIN STORM is a ghostly mix of dance, projection, and text that leads us through a young woman’s day-to-day, post-brain injury. The layers of performance—from non-verbal expressions, to versatile rolling dividers, and suggestive projections— come together to create truly unique performance experience.

The play tells the story of a young woman, post-brain surgery, adjusting to her new life. The voices of doctors mix with the memory of her grandmother, overwhelming coffee-dates with her best friend, her attempts to write a play, and general experiences around coming to terms with who she is now. Fittingly, while the ‘A-Plot’ is told chronologically (to a point), the narrative itself is disconnected and episodic, reflecting the new perspective of our heroine. What results is a fascinating deep dive into the magic and the science of the human brain, with all its qualitative and quantitative peculiarities. BRAIN STORM is an artistic feat, inviting the audience into the complex and liminal space of the mind, allowing us to slip, a la stream of consciousness, around questions of perception, mental health, ability, ghosts, and artmaking. Additionally, the Lucid Ludic team don’t just talk the talk: every production of BRAIN STORM is a relaxed performance, instigating both a conversation on the challenges facing those living with brain injury, as well as creating a comfortable theatrical space for neurotypical and disabled people.

BRAIN STORM is the brainchild of writer/director Taliesin McEnaney, in collaboration with a stellar all-female ensemble: Hayley Carr, Maïza Dubhé, Shayna Virginillo, and Alexandra Montagnese. The four weave movement, dance, and speech around one another, sometimes in unison, sometimes echoing each other, to create a complex and expressionistic performative landscape. Montagnese offers comic relief in spades, as our central character’s well-meaning, but self-centered, best friend. She steals the scene with a mere glance to her fellow performers; these comedic elements brought some much-needed levity to a play that could have easily been overwrought. Dubhé is another highlight: she moves delicately, intensely, adding an evocative non-verbal layer to the performance. But it is all four together that create this unique space— it’s a liminal space that they and drift and dance through, one equally comforting and eerie. The only wrinkle in the well-choreographed piece was the occasional noticeable missteps between performers. They were not always quite in sync, and did not always seems to be on the same page, which I chalk up to either opening-night jitters, or remount-show cobwebs. Whatever the cause, these few singular errors didn’t distract from the overall performance.

It is the formal elements of Brain Storm that truly set it apart. Projection, sound, set, movement, and text come together in startling and evocative ways, brilliantly illustrating the plays oscillating themes (shout out to the incredible design from William Bezek, Olivia Shortt, and Melissa Joakim). The play seems to ask, how do you stage an atypical neurology? Certainly not in a ‘typical’ way. Themes and scenes of possession, seizures, madness, and expression, are folded in on one another, so that we wonder, for a moment, what we are seeing… Compelling stage images of Victorian surgeons, with white caps and red lips, haunt the characters and the stage, disrupting the ableist idiom that seeing is believing. Scenes are punctuated with movement phrases, adding a physical element to the narrative that greatly enhances this story about recovery and the mind. For instance, as the character navigates her balance on the subway, so too do the phantoms lean forward and backwards, as if on a tight-rope, elegantly foregrounding themes of balance and dialectics. Scenes flip in and out with all the logic of a wandering mind, with all the malleability of neuroplasticity, with characters meeting across time through anachronistic and uncanny slippages.

The play ends hopefully, with the signs of slow progress, but progress nonetheless. While the end has some finality, there is no sense of absolute resolution, and nor should there be. Instead we are given a sense of the end of one chapter and the beginning of the next, and with it an invitation to see through new eyes, and with a new perspective. I wasn’t quite ready for it to end. The play’s gentle navigation through the mind, memory, time, and the present moment is something of a waltz, well-paced and methodological, yet we’re going in circles, spinning in, spinning out, and through to something else, something more, something beyond what we can see and hear. I enjoyed spinning with BRAIN STORM so much that I didn’t realize that the winds had died down and that the song was over. And truly, I could have danced all night.