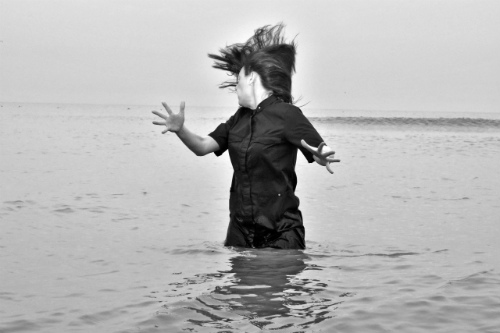 Onstage at the inspiring Citadel + Compagnie, Kate Hilliard’s production of this happened… is personal, thoughtful, and dreamlike. The opening scene is striking and powerful, and the audience is pulled in and intrigued as the gestural movements begin to translate more and more into words, a conversation. Hilliard has gathered a group of wonderful artists around her in this project. Everything was curated with such intention, from the exhibit downstairs, to costuming, dance, and sound/video design. If anyone is looking for a definition of Modern Dance, I would point them toward this piece. It has a strong history and storyline, intricacies of movement, and while often beautiful, sometimes oblique to an audience.

I enjoyed the beginning of the show, and the moment of comedy that broke the tension was golden. Creatively constructed to poke fun at modern dance itself, I was giggling along with the rest of the room, hoping there would be more. While I was not treated to a meta-comedy-dance piece, I did love the gestural themes of This Happened, its creative composition, and how it layers in a nesting bird metaphor that is reflected in the visual art exhibit. While compelling in its opening and closing scenes, I did find myself lost in the middle. Often a critique of modern dance, I found it inaccessible. Part of the beauty of modern dance is the creative process, and while that does not need to always be explicitly shared with the audience, I found this performance too shrouded in subtleties to be entirely relatable. On the other hand, this piece is an exploration. It is completely and radically personal. While I felt on the outside of meaning and was left questioning some abstract moments, I am also happy to accept this piece as the inevitable creation of the incredibly personal moment that sparked This Happened.

Throughout the show, it was Miyeko Ferguson who caught my eye. One of the dancers, Ferguson’s absolutely natural movement quality shines through and lends both honesty and gravity to the show as a whole. She is as subtle as the storyline itself, and is intriguing to watch. In fact, all four of the dancers showcase excellent skill and creativity. This Happened should be celebrated for its honesty and its personal nature, a flagship of just how vulnerable artists are capable of being onstage. While some elements fell a little flat, the show overall is a success. Hilliard should feel proud and bolstered, and I hope that this show has helped her heal and grow.