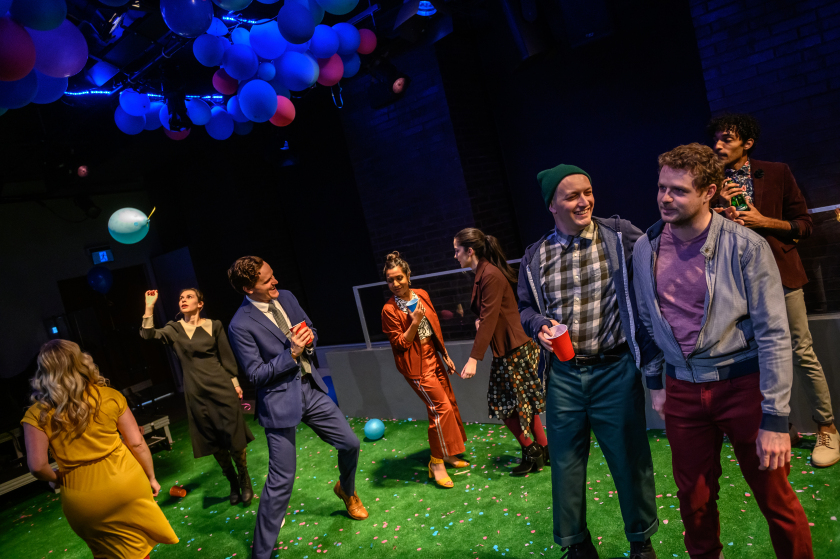 That first image sets up 2 hours of high energy, sharp dialogue and no holds barred performances in an almost claustrophobic and suffocating look at those caught up in a system that hoards wealth, happiness and power for the few while dangling the scraps in front of the many. The many who tear each other and themselves to pieces for those scraps. This is a ruthless, hilarious and well executed play about that conflict. The conflicts start early with our titular characters Caroline (Hallie Seline) and Casimir (Alexander Crowther) having what appears to be the last fight of their relationship at the office party. Casimir has just lost his job and while he falls into a downward spiral, Caroline wants to keep partying. It is interesting to note that these two don’t actually have that many scenes together and really this is an ensemble play about how even at an office party, the one night where everyone should just celebrate and forget about work, the knives are still out.

The party is full of engaging and complex characters that are strengthened by heightened, painfully raw and dedicated performances that make each character stand out. It runs the gauntlet of office tropes from the smug sleazy boss Rankin (James Graham bringing a very layered performance that adds nice complexity) to the intern Trevor who is just happy to be there and ultimately provides the moral compass so desperately needed (Michael Chiem with a very sweet and satisfying character journey). While I don’t have the word count to single out every performer in the ensemble, I will say each time anyone is on stage they are magnetic and I would be interested in seeing, in future iterations of the play, different characters’ stories being explored more. The characters’ lives are a train wreck and everyone is so capable at bringing out the worst in each other that the tightly executed dance pieces (choreographed by Reanne Spitzer) are a fun, enjoyable relief. But the unity showed in those pieces is ultimately just an illusion. Disillusionment is something that runs rampant in this play and it brings me back to the fact that the piece is set on a balcony. See? I told you we come back to it.

When you are on a balcony, you are on a level where the anything seems possible. The sky is open, you are so far above the ground that all your limitations seem to get left behind. Then maybe you see a plane or a zeppelin even higher. Maybe the heads of your corporations are on it and you find yourself wishing you can leap and fly off the balcony and into the air to join them. There is a reason why balconies have barriers, though, because without the wings and mechanical safety of the zeppelins and other flying machines above you, all you would do is fall.

Casmir and Caroline is a lot like that journey from falling to landing on the ground. It is chaotic, energetic but it’s also sobering, ruthless, hard, and it hurts. This is a piece where one can find themselves in stiches from laughing at these character’s misfortunes and falls but also realize that the next day they might find themselves in that same situation, and then who’s laughing?