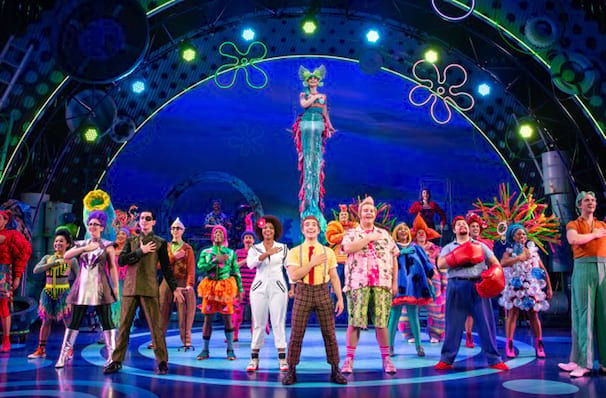 The SpongeBob SquarePants Musical in Toronto

The SpongeBob SquarePants Musical, presented by TO Live at Meridian Hall, was a breakout Broadway success in 2017/2018 garnering 12 Tony Award nominations and is the first in what TO Live is hoping to be an ongoing Broadway series. It is a production that will delight the children in the audience and entertain their adult accompaniment. A few rogue millennials might sneak into the mix to enjoy a little unapologetic youthful nostalgia as well.

So, what might you expect from a musical based on the Nickelodeon cartoon SpongeBob SquarePants? Probably exactly what you are going to get – bright lights, big songs, a healthy dose of silly fun and a life lesson (or two or three) on the side! The beautiful sets, engaging characters, and heart-warming storytelling make for an entertaining evening out with family and friends.

David Zinn’s work on costuming and set design transformed the stage of Meridian Hall and the lively cast into an underwater oasis populated by the beloved characters of Bikini Bottom. Whimsical decor surrounds the stage – shimmering green streamers, glowing neon bubbles, and kelp made of pool noodles. It is a visually stunning set that is only made better by Keith Adams’ lighting design choices and Peter Nigrini’s projections.

Smart costuming is one of the standout characteristics of this show. None of the characters are completely dressed up as their aquatic counterparts. Instead Zinn has chosen to dress them in colours and styles that reflect their animated alter egos. Of course, SpongeBob (played by Lorenzo Pugliese) is adorned in customary yellow and wears his signature suspenders and red tie while Patrick (played by Beau Bradshaw) is decked out in a loud, patterned pink shirt. Some other characters do enjoy some extra adornments. Squidward (played by Cody Cooley) wouldn’t have been the same without his four legs and Mr. Krabs (played by Zach Kononov) sports huge red pincers. Plankton, the pint-sized villain of Bikini Bottom, is played in full size by Tristan McIntyre and fun-sized by a stuffed figure.

As difficult as it can be for an actor to embody an established animated character, it can be even more difficult to vocalize them. Audience members surely would have watched hours of these characters on television and have a set idea in their heads about how they should sound and behave. The talented cast does an outstanding job representing the vocal styles and physical quirks of their cartoony characters, belting out songs such as the angsty “No Control” written by David Bowie and Brian Eno and Panic at the Disco’s emo-tinged tune “(Just A) Simple Sponge”. There is even a rap, “When the Going Gets Tough”, co-written by T.I. among others. One of the standout songs and performances of the evening was Cody Cooley’s Squidward singing “I’m not a Loser” in aqua sequin tails, high-kicking along with a full chorus line of sparkling dancers. Glorious, glamourous, and a powerful message delivered with a POW!

Squidward’s reflective song about self-confidence is not the only time these characters serenade the audience with positive messaging. Additional tunes about believing in yourself no matter what others say, perseverance, and especially a storyline about tolerance and accepting others’ differences mirror larger issues facing our world in an accessible way for the (mostly) young audience in attendance. Adults in the crowd may nod along and learn a lesson too when SpongeBob addresses the townspeople of Bikini Bottom because they have chosen to “blame”, “follow”, “exploit”, and “control” others during tough times instead of sticking together to solve their problems.

The performance itself is very relaxed. Be prepared for children running up and down the aisles, lots of chatter, a few tears, and people coming and going casually throughout the performance. The first act is long haul for many of the younger children and they were getting fussy by the time intermission rolled around. At a runtime of over 2 hours, the show is a bit lengthy for very small children and might be more suitable for a crowd over the age of 8 years old. There were many sleepy faces leaving the theatre after 10:00 p.m. after Tuesday evening’s performance.