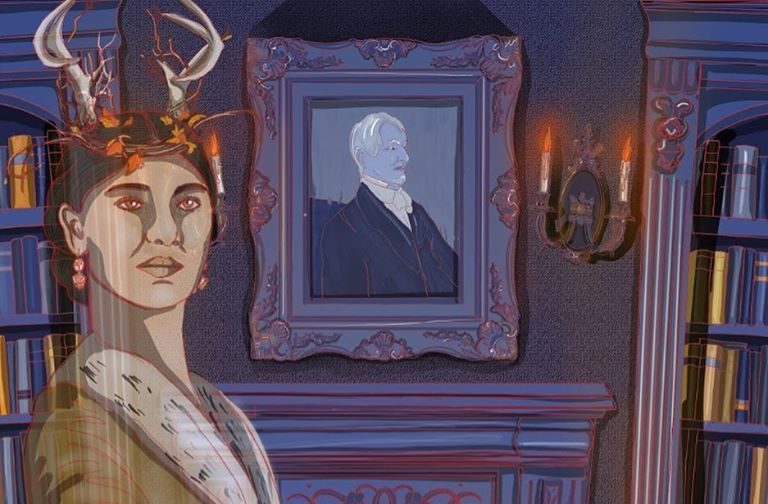 It’s the holiday season which means we get to relive the quintessential secular Christmas story – apparently the only one, again and again. Avid Carolers are spoilt for choice – after leaving Spadina Museum full of festive cheer, you can head to The Three Ships Collective’s remount of last year’s brilliant Carol at Campbell House before taking in the Christmas Market en route to Soulpepper’s crack at that old chestnut – and those are just the ones with the best advertising. Unless we can learn its lesson and join together in the holiday spirit, we are doomed to live in the vision foretold by The Ghost of Christmas Yet to Come where all Toronto theatre is replaced by site-specific adaptations of A Christmas Carol.

White Mills Theatre Company’s Carol at Spadina Museum sets the bar high enough. It’s tough to find new ways to breathe life into Scrooge’s story but the pair of Scrooges here do a fine job, each guiding his set of guests through his visions and transformation before everyone is reunited. This twist makes the show hard to review with much confidence – you never know if you saw things the same way as the other viewers but you at least know you saw the same things, and you can’t assume that here. While other immersive performances install the audience as flies on the wall these performers are more interactive, treating the traipsing viewers as guests, servants, and confidants. This creates a different vibe for the evening but also helps to keep the show moving while the audience is – the layout of the Museum means the transitions between scenes take a while. The setting is striking and an ideal backdrop for the spirits’ tour – the drabby minimalism of the restored kitchen is a natural fit for the Cratchit residence – even though there’s not much truly distinct from other landmarks that would catch a location scout’s eye. Carol is a work heavily informed by its historical context but its social commentary isn’t exclusive to 1840s London, early 20th century Toronto, or late capitalist Toronto. Attempts to make it modern can feel a little unnecessary or jarring; this production gestures in that direction but doesn’t commit to the goal enough to run that risk.

The most refreshing aspect of Spadina’s Carol is the music – the scripted carolling at the start is just the beginning of the musical interludes, with the whole cast displaying an impressive vocal range as they – and the more plucky audience members – use carols to add colour to scenes. The cast performs well when the music stops: Aaron Durand’s Fred is a highlight, stealing the show like he’s Old Joe and drawing the starkest possible contrast with his miserly uncle, while the Cratchits (Russel Harder and Breanna Maloney) are a compelling portrait of grief for their peppy but sickly urchin (Cassandra Davidson).

Even veteran Carolers are recommended to brave the cold and the Baldwin Steps to take this one in. Though we may have seen it many times before, the Christmas story is timeless and lives on in all of us – every person is their own site-specific adaptation of A Christmas Carol.