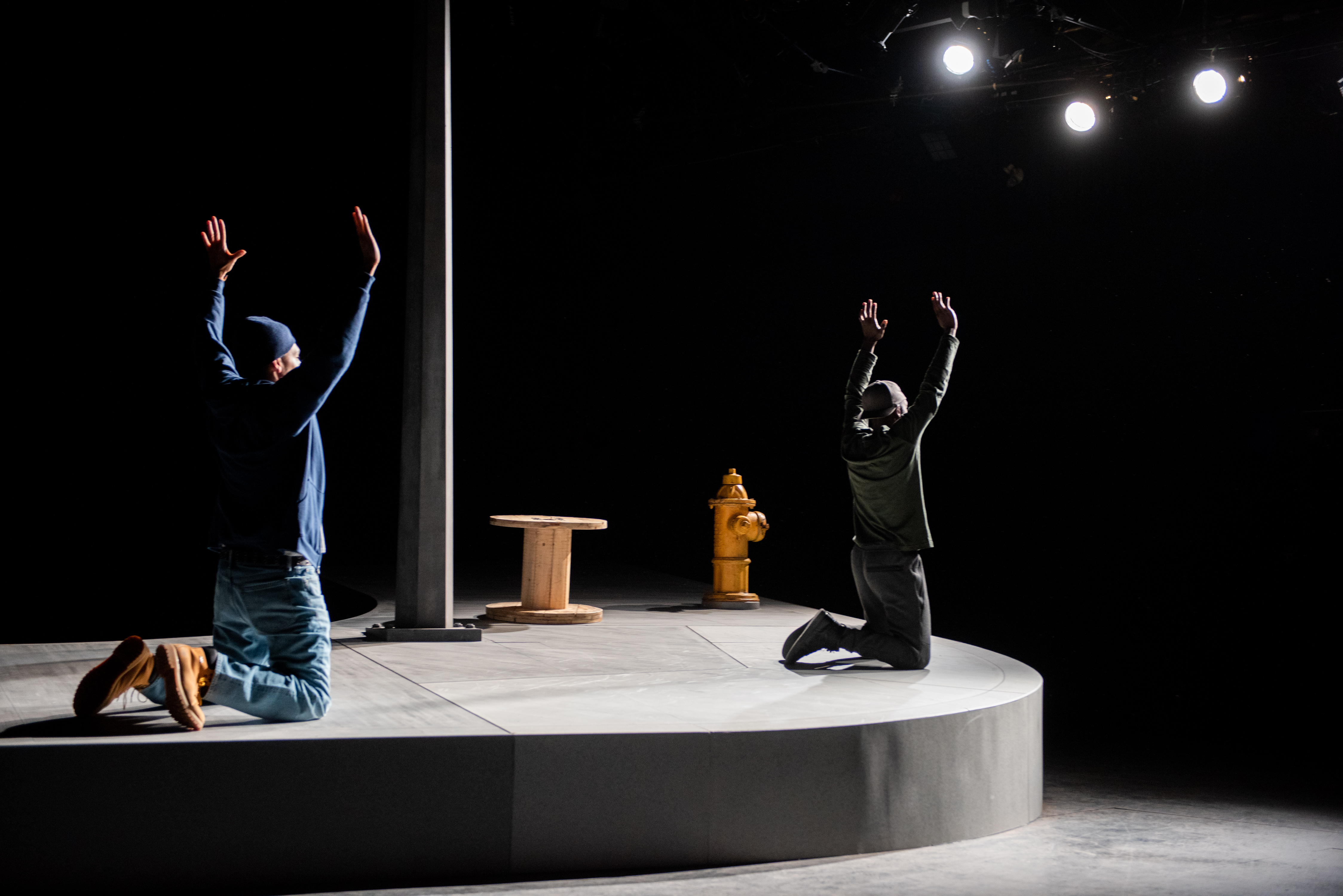 Obsidian’s Pass Over and why we see theatre

We, the audience, are waiting for the play to start. Kitch (Mazin Elsadig), on stage, is waiting for his friend Moses (Kaleb Alexander) to wake up. Moses is waiting for a lot of things. For the promised land, for the seas to part, for him to live up to his name sake. He’s waiting to pass over, he tells us. Pass over. So begins the absurdist play about two black men, on a street corner, waiting for something. They play games. They talk shit. They wish for weed. They daydream. They get interrupted by a white man. They get harassed by a white cop. They talk about who is dead. They talk about whose been killed. And they sleep. Rinse and repeat. “How you is?” Kitch asks as Moses wakes up. “Kill me now,” Moses replies. “Bang Bang”. And so it goes for these two until the play is over. It doesn’t let up. Instead, Pass Over is hard. It is funny. It is complex and painful. It is also sweet and playful. Billed as a take on Waiting for Godot, Pass Over is a stark snapshot of the lived-reality of black disenfranchized men, police brutality, and systemic racism. It’s also about food, dreams, and friendship. Pass Over invites us to wait alongside the characters, in a world that is both ticklingly absurd and painfully, unblinkingly real.

Pass Over has a lot going for it; the performances are sharp, focused, and heartwarming. Phillip Akin’s direction is measured, intentional, and spirited. Julia Kim’s set is simple, clean, and uncomplicated, with a large sidewalk corner, and lamppost taking the place of Godot’s tree. The script is astounding; Antoinette Nwandu’s text will be one for the ages, as she both gives us what we want as an audience, and takes it away just as quickly. This is not an easy play; it has a stylized energy that doesn’t beat around the bush. It walks the tightrope between absurd and real, subtle and blunt. The story blends both macroaggressions and subtle moments of racism with larger systemic issues and moments of overt racial-violence. It tackles topics like police brutality with one hand, and then dreams of milk and honey with the other. The two men talk about things they love, and then a moment later are on their knees facing the bright, unforgiving, omni-present power of the police. They have a surreal, hilarious interaction with a white man and his abundant picnic basket, and then moments later are physically, sexually, and verbally harassed by a white cop. The questions “Who are you”, “Where you going” become a chorus, following these black men as they simply try to get off the street. To pass over. Pass Over is both alienating and entertaining, critical and utopic. It is like tilt-a-whirl: it’s dizzying, and yet, we are grounded in the simplicity of the set design, in the virtuosity of the performances, and the elegance of the direction.

I hope I’m not getting too lost in metaphors; I’m having trouble putting my experience into words. I think I’m lost a bit with this play. It has taken me some time to write this review, for many different reasons. One of them, is that I am a white theatre critic in a city of predominantly white theatre critics. If I could throw this in a footnote I would; but I am also interested in the practice of self-identifying and positioning oneself, in an effort to acknowledge the power and privilege I have as both a reviewer and a white person. This rejects the fallacy of the ‘objective’ reviewer, as theatre critic Carly Maga discussed in a paper presented at the Canadian Association for Theatre Research this past May. And yet, the practice of self-identifying in reviews is still unrehearsed. How does my privilege play out when reviewing a show like Pass Over? Why aren’t there more reviewers of colour? Additionally, Pass Over has its own troubled history with a white, ‘objective’ female theatre critic: Hedy Weiss was deeply criticized for her bigoted and tone deaf review of the original production in Chicago in 2017. As Luke Reece recently wrote in relation Weiss’ comments, “[a]s Black artists, do we want white audiences to be comfortable with our work?” I think this is a provocative question. As a curator, I’ve encountered incredible black artists who intend to make white people uncomfortable with their work. This kind of work is essential: not only does it create a space for black folk and people of colour to come together around a piece of artwork, it can also open up space for white folk to confront their privilege and their role in systemic racism. And so, maybe that’s why I’m struggling to find the right words to talk about this play: Pass Over is confronting. It doesn’t offer answers or solutions. But it sure as hell points out the problem. And it is a fucking big problem. Yes, Pass Over is confronting and it is supposed to be. As Reece puts it, “I actually think [art] is about feeling tremendously uncomfortable. I want to be unsettled. I want chaos. This is how we change the world. This is how we stop feeling helpless.”

When the play was over, I could hear an audible exhale from the audience. We had been collectively holding our breath. I heard someone mention it, as we were exiting, with relief: “I can breathe now!” My friend who saw the show with me mentioned that too, but as a negative; is there something dangerously cathartic about representations of racial violence? Do we imagine that when the play is over we can breathe easy? While I see her point, I think Pass Over walks this line with intention. It all comes back to the artistic and political purpose behind being unsettled or confronted. Sometimes we need theatre to catch our breath. Sometimes we need to be reminded that not everyone breathes easy. And sometimes we need a play to take our breath away completely. I think Pass Over might still have my breath, and I’m not quite sure what to do about that.