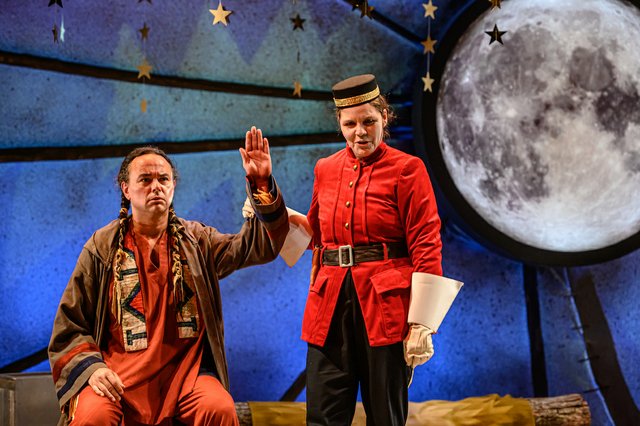 Almighty Voice and His Wife at Soulpepper

Daniel David Moses’ Almighty Voice and His Wife provides a contemporary retelling of the events leading to Cree Warrior Almighty Voice’s untimely death, and his ill fated love affair with the unnamed ‘White Girl’. First mounted in 1991, Director Jani Lauzon crafts a dream-like world for actors James Dallas Smith and Michaela Washburn to stretch the edges of their characters in. The first half of the production speculates on the events that may or may not have lead to Almighty Voice’s initial arrest, his jail break, and the years spent on the lam from The Mounties with his young wife, White Girl, circa 1890s Saskatchewan. The story is fleshed out by White Girl recounting anxieties that developed during her time spent at a Residential School: she fears the ‘glass-eyed god’ to whom she was ‘married’, and insists that she and Almighty Warrior use the names Marie and Jean Baptiste, forced on them by the agents of this god (Catholic nuns and priests), as a way to reclaim their spiritual sovereignty. White Girl’s narrative role is both powerful and subtle; though the narrative arc belongs to Almighty Voice and his run from the law, it is White Girl’s sexual and spiritual abuse related trauma that provides the nuanced desperation that informs this young couples actions while nodding to the social and cultural alienation that the residential school system created.

The tone of the play shifts in the second half from a stylized naturalistic set (Ken Mackenzie) relying on subtle lighting and projection (Jennifer Lennon) suggesting both the inside of a teepee and the outdoor wilderness, to a bright and brassy vaudevillian stage scene. A set feature from the first half, a kaleidoscope-like smokehole that loomed over the characters resembling an ever watchful eye, is hidden by a bright and oversized moon which lends an uncanny feel to the last half of the show.

As the old adage goes, history is written by the ‘victors’, and this remains ever true for Canada’s whitewashed colonial history. After intermission we return to a culturally insensitive vaudevillian fever dream that takes aim at stereotypical perceptions and racist depictions of Indegenous culture. The jokes and songs are vaguely familiar in a recognizable nostalgic Canadiana sort of way. “Land of the Silver Birch” and enthusiastic “Buck and Squaw” dance routines augment Washburn and Smiths well timed physical comedy and off-colour humour. Through an afterlife transformation Almighty Voice becomes ‘Ghost’, while White Girl takes the role of ‘Interlocutor’, brashly if not sheepishly pushing Ghost to perform his last hours of life for us the unwitting (though voluntary) audience. The campy and uncomfortable caricatures of Indigenous culture serves to interrogate the biased representation of Indigenous people in popular culture, successfully subverting prevailing stereotypes. Washburn and Smith perform with nuanced depth and punchy humour, and in this era of ‘fake news’ and right-wing populism, Lauzon has provided a timely remount of Moses’ work.