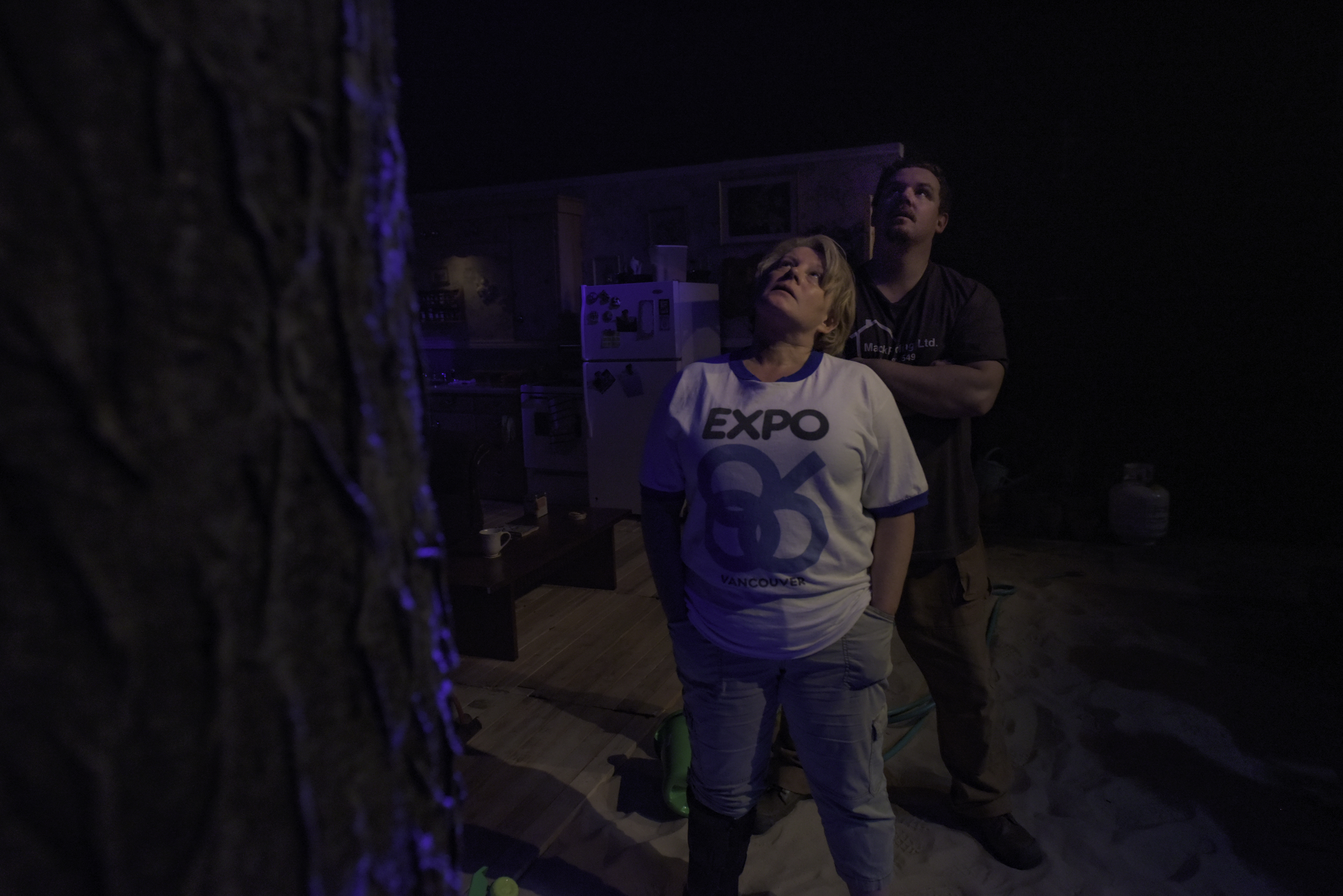 Set in the British Columbia town of Kelowna against the backdrop of the worst wildfire season in Canadian history, Dock Mother God Society, Blood Pact Theatre’s latest production, is the story of personal, familial, and societal dysfunction that is both tragic and hilarious in its storytelling and delivery.

In this one act play, we meet Ed (Mark Paci), a man who is living with his Auntie Bev at her home on the lake. It’s a place where he spent his childhood swimming, climbing trees, and listening to his Auntie’s stories of mythical creatures that live in the waters at the end of the dock. With the help of Jay, (Wayne Burns) Ed’s young sponsor, Ed is trying to rebuild a life that has been torn apart by his alcoholism. All the while, Bev (Elizabeth Saunders), Ed’s godmother, is stuck struggling with her own demons. She is entangled in her own constant battles, at odds with her community, and more specifically her neighbour Rich, (John Healy) over the fate of a tree. She continues to wallow in her own grief brought on by the untimely death of her husband some 33 year earlier.

Writer/director Bryce Hodgson is also responsible for the impeccable set design, creating an unexpectedly warm and homey atmosphere inside the Grand Canyon, which itself was reinvented from its previous life as a car repair shop. Hodgson creates space for a majestic floor-to-ceiling tree trunk, the very tree that is in dispute between Bev and Rich. A Spruce Moose canoe hangs from the ceiling rafters above a sand-covered “beach” littered with plastic buckets and shovels, a subtle reminder of Ed’s daughter and her absence from his life. Inside is a comfortable and lived-in kitchen and living room. It is kitschy by today’s standards, with its over-stuffed, wood-framed chair, couch, and player piano, but there is no hint of irony in the decorating. This is just Bev’s style – just like her, it hasn’t moved on, hasn’t changed since her husband’s death.

Lighting and sound designer Quinn Hoodless transitions between tranquil near silence interspersed with the sounds of the forest, and waves lapping against the shoreline to an eardrum-piercing cacophony of sounds that at one point literally had me covering my ears it was that loud. The changes are abrupt and disconcerting. Coordinating with the sound is lighting. Dark blues bathe the stage during evening scenes or when we are to visualize the water just beyond our sightline, but most of the time the stage is bathed in a warm light that is reminiscent of being at the cottage on a beautiful summer day.

It is at these times that relationship between Bev and Ed unfolds before us; Bev regaling Ed with her fanciful stories of performing a tooth extraction on an OgoPogo (the tooth is just downstairs) and stories of his childhood at her home. Moments of tension regularly bubble to the surface when Ed attempts to engage in more serious conversation about his sobriety and desire to be with his family again.

Mark Paci carries the weight of Ed’s addiction on his shoulders in his physicality, stooped and unkempt. His characterization is parts anger, sadness, resign, and weakness. There is little in Ed’s nature that speaks to self-esteem or confidence and Paci captures that well in his performance.

Saunders’ portrayal of Bev is excellent and gets to the core of the character’s persona; despite her seemingly caring attitude, Auntie Bev is quite a self-centred person. She is there to tell a story, usually about herself and usually when unasked, and does not seem overly concerned about others. She is unwilling to work through problems, instead choosing to make them worse through her own actions. She pities herself over all others. Despite this, Saunders makes the character likable and empathetic, so the audience is on board with those stories, which often act as tension-breakers to lighten up what could otherwise be a very dark story.

Solid performances by John Healy and Wayne Burns round out the excellent casting. Healy’s Rich sheds further light onto Bev’s dysfunction helping to fill in some of the gaps left in Bev’s own rendition of her life and story, while Burns’ character Jay helps accomplish the same for Ed, as he tries to get his friend to take responsibility for his life and actions.

Dock Mother God Society is a funny, tragic, yet familiar story. Audiences will laugh out loud, cringe at times, feel uncomfortable in their seats, question intentions, and most importantly relate to what is going in front of them.