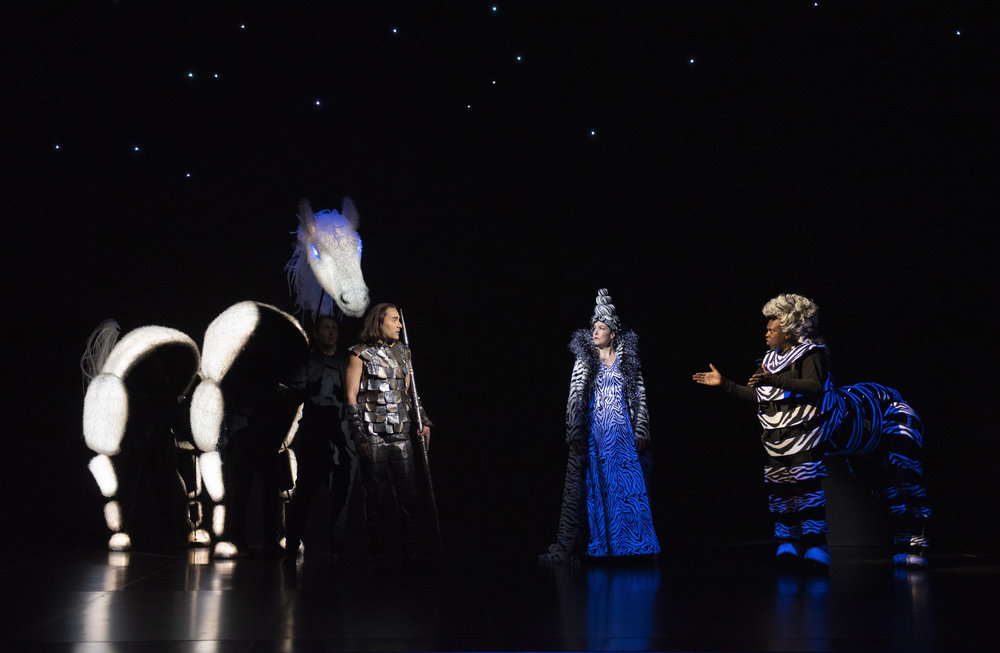 The safest compliment for art is that it knows who it’s for. Stratford’s roster in a given year mostly consists of sober, supposedly thoughtful pieces aimed at some cross-section of a reliable clientele: there will be something for the Shakespeare crowd, a high-concept work that tickles critics pink, and maybe a disappointingly rote dalliance with musical theatre. You hope that a few of these shows will shine brightly enough to draw wider interest but it’s no surprise when you’re the youngest audience member at some Henry or other by at least a generation. With the usual debates around commercial theater’s accessibility and appeal raging as strongly as ever, writers and directors have to be self-aware and self-critical about their mission.

The Neverending Story knows who it’s for. Author Michael Ende writes that, “It is for this child in me, and in all of us, that I tell my stories”, and this is reflected in the audience – the younger and familial one you generally see once a year in the Avon Theatre, full of kids revelling in the sparkling fantasy and parents enjoying watching their kids enjoy it. For Ende something vital is lost when we lose our childhood embrace of fantasy, not just a refuge from the real world but a necessary tool for navigating it: “The inner world must be added to the exterior world, it must be created and discovered. And if we do not, now and then, make a journey through our inner life to discover these values, they will be lost”. Ende wrote as a survivor of Nazi rule who knew the cruelty of the real world – and the importance of being able to lose yourself in a simpler one – all to well; this story’s hero, Bastian, distracts himself from family strife and school bullies with a bookstore’s endless adventures.

Each adaptation of The Neverending Story implicitly reveals its medium’s ability to offer a kind of escapism – it’s easy to imagine an older Bastian as a typical theatre kid, finding himself on the stage as so many do, or to see a love of theatre blossoming in the enraptured youngsters beside you in the audience. To the extent that any work has to justify itself by offering something new, an adaptation faces the unique challenge of rising above its former selves. Sometimes the change in medium is enough by itself – the stage has potential that the screen does not, or vice versa – but mostly some new interpretation of the text or a tonal shift is needed to breathe new life into the work. This Story’s ancestors are a perfect case study in the limits and promise of adaptation. Ende called the film adaptation “revolting”, protesting that the directors mangled the plot and ruined the premise of the story – a story that, in its new form, gave renewed joy to millions of viewers for whom the “gigantic melodrama of kitsch, commerce, plush and plastic” that Ende sneered at was exactly what they signed up for. It may be a neverending story, but not the one – certainly not his! Those who enjoyed the original may see this not as a Beckett-esque tantrum but as a sympathetic plea from someone whose creation was wrested from their control. As Bastian discovers, though, the best stories take on a life of their own in the minds of their beholders; this story belongs not to Ende, or to some corporate entity, but to each and every child to whom it gave some ineffable, fleeting joy. The author lies dead, slain by the gallant hero that every viewer sees in the mirror. It might be some consolation that David S. Craig’s stage adaptation remains faithful to Ende’s vision while stimulating its audience’s imaginations.

While each story is uniquely personal to its fans, many stories follow a familiar structure. Citing Joseph Campbell’s famous comparative mythology The Hero with a Thousand Faces, Stratford’s literary director David Prosser’s introduction places The Neverending Story in the same tradition as the countless ‘adult’ legends that drove men to keep the faith, charge into battle, or embrace a media mega-franchise. The title hints not just at the blank canvas that unfolds before Bastian but the work’s own membership of the evergreen ur-story. In this sense, this story is more conservative than imaginative – and suggests a much stricter limit on Bastian than we want for him. Whatever personal touches he – or Ende – may add, what we see is a reskinned version of the only tale we really know.

But that’s the point! The idea of this story is that it’s the story – the details don’t need to make sense, giving the script the freedom to be as absurd and exaggerated as it yearns to be. Gmork is meant to be a pantomime villain – he’d be less compelling if he were more nuanced! We have no reason to be invested in The Childlike Empress other than her role as a stand-in for every character of her ilk. This patchwork plot is exposed if our attention lapses for a second but Jillian Keiley’s production succeeds in holding it throughout. Credit here goes to the cast, who lean into their roles with the necessary and sufficient enthusiasm (though how to divide the praise between Artax (Head) and Artax (Hind) is unclear), but mainly to Bretta Gerecke’s outstanding design (bolstered by Leigh Ann Vardy’s exemplary lighting design and Hawksley Workman’s original soundtrack) which immerses viewers in a trippy, kaleidoscopic world that’s fantastic in every sense. The use of light and darkness to represent The Nothing – the erasure and absence of imagination, a rare representation of all-consuming existential dread in a children’s book – could easily fall flat but instead feels fully integrated into the immediate universe. The result is an enthralling audio-visual experience that’s the perfect palate cleanser for any age. This production is proof of Ende’s maxim that writing something off as childlike is to shut yourself off from the magical.