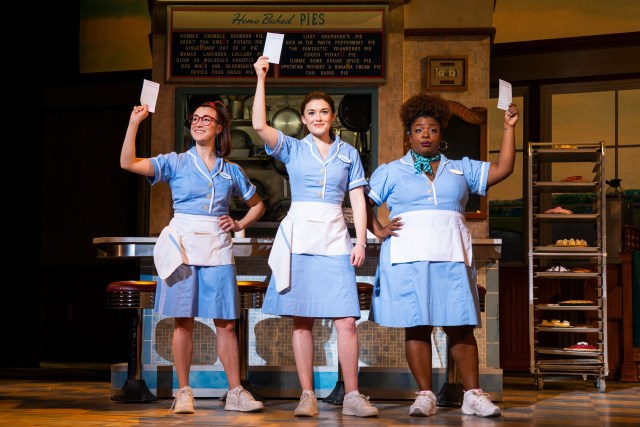 Waitress *sigh* as a Musical

Some stories take a few tries to find their perfect medium. Les Miserables, for example, is a meandering bore of a novel (hot take? Whatever, I don’t want to hear about it) but, when it found its rightful home in musical theatre, everything clicked. Eugene Onegin is a poem, an opera, and a musical, but it’s most affecting as a ballet. As a kid, it wasn’t Full House the show that captivated my imagination, it was the novelization series about Michelle and Stephanie. Adaptation can be an incredibly useful exercise if it’s used to unlock aspects of the story that may have been inaccessible or overlooked in the previous medium. Some stories, however, are told most effectively the first time. Waitress most definitely falls into that second category.

A 2007 Sundance hit, Waitress was a decidedly independent auteur-driven endeavour. Adrienne Shelly wrote, directed, co-starred in, and collaborated on set and costume design for Waitress, completing the film and submitting it to Sundance before her brutal death in November, 2006. It was totally and completely hers. Without even touching on the content of the film and its suitability for another medium, I pretty strongly feel that Waitress should have been left alone.

But let’s talk about the content of the film and its suitability for another medium, just to really drive this point home. Waitress is a small, personal story about a small-town girl with small dreams of just living her life safely and finding a little happiness. Jenna works in a diner and makes really good pie. She’s kind and beautiful and trapped in a brutal marriage to Earl, the sort of man you’re scared to tell that you’re pregnant. Which she is, which brings her to the office of a married hotdoc with whom she starts up an affair that’s incapable of going anywhere, just like Jenna. There is almost no plot in Waitress, the ensemble is small but well-developed, the world is tiny but crystal clear. It’s all about stolen glances and hidden wounds, unglamorous realities and the things we can’t have.

Though small, intimate musical theatre pieces do exist and maybe there’s a world in which Waitress could have been one of them, the sparkly Broadway adaptation that’s currently on the Toronto leg of its “national” tour is a perfect example of misguided adaptation. Pop star Sara Bareilles was brought in to write the music and lyrics and, though the thoughtful and vulnerability-embracing Bareilles is certainly the best pop star to turn to if you absolutely must turn to a pop star to write the music and lyrics of a deeply personal indie movie adaptation, the result is too slick to do justice to the story’s grit and most of the songs feel like extractible pleasantries rather than rooted theatrical moments. The production is over-choreographed, over-lit, over-populated, and too long. Though the current touring cast is excellent (Jenna has become a first choice part among musical theatre’s strongest mezzos, aka ex-Elphabas, and Christine Dwyer lives up to that hype), there’s no saving bad material. Even breakout hit “She Used to be Mine” doesn’t stand up to dramaturgical scrutiny, though Dwyer delivers the hell out of it.

Most grating perhaps is the cutesy jazzhandification of the tone of the piece. The film walks a very thin line between pie-flavoured fairy tale and bitter sadness but the musical’s overly comedic take pushes everything too far into lighthearted territory to the point where it feels unearned when the story turns towards its darkest realities (including everything about Jeremy Woodard’s Earl, a character so vile Woodard literally mouths “I’m so sorry” to the audience at curtain call). Perhaps the perfect example is in the character of Ogie (played here with impish verve by Jeremy Morse) who earnestly leads a big group number declaring “I love you means you’re never ever getting rid of me” to a woman who has attempted multiple times to rebuff him. As the whole cast of characters happily sang along, I wondered if anyone at any point in the show’s development or this particular production’s rehearsals had ever thought to layer in even a tiny acknowledgement that Ogie’s language isn’t all that different from Earl’s.

That lack of nuanced insight is exactly the problem with Waitress in Big Broadway Musical form. The audience is too far from the actors to spot what’s going on beneath the surface and the stage is too big for us to feel trapped alongside Jenna in the way that the film so beautifully captured. There is nothing about Waitress that is unlocked or interestingly re-contexualized by it being a musical. It doesn’t need to be a musical, it just is a musical now. I so badly wish it wasn’t.