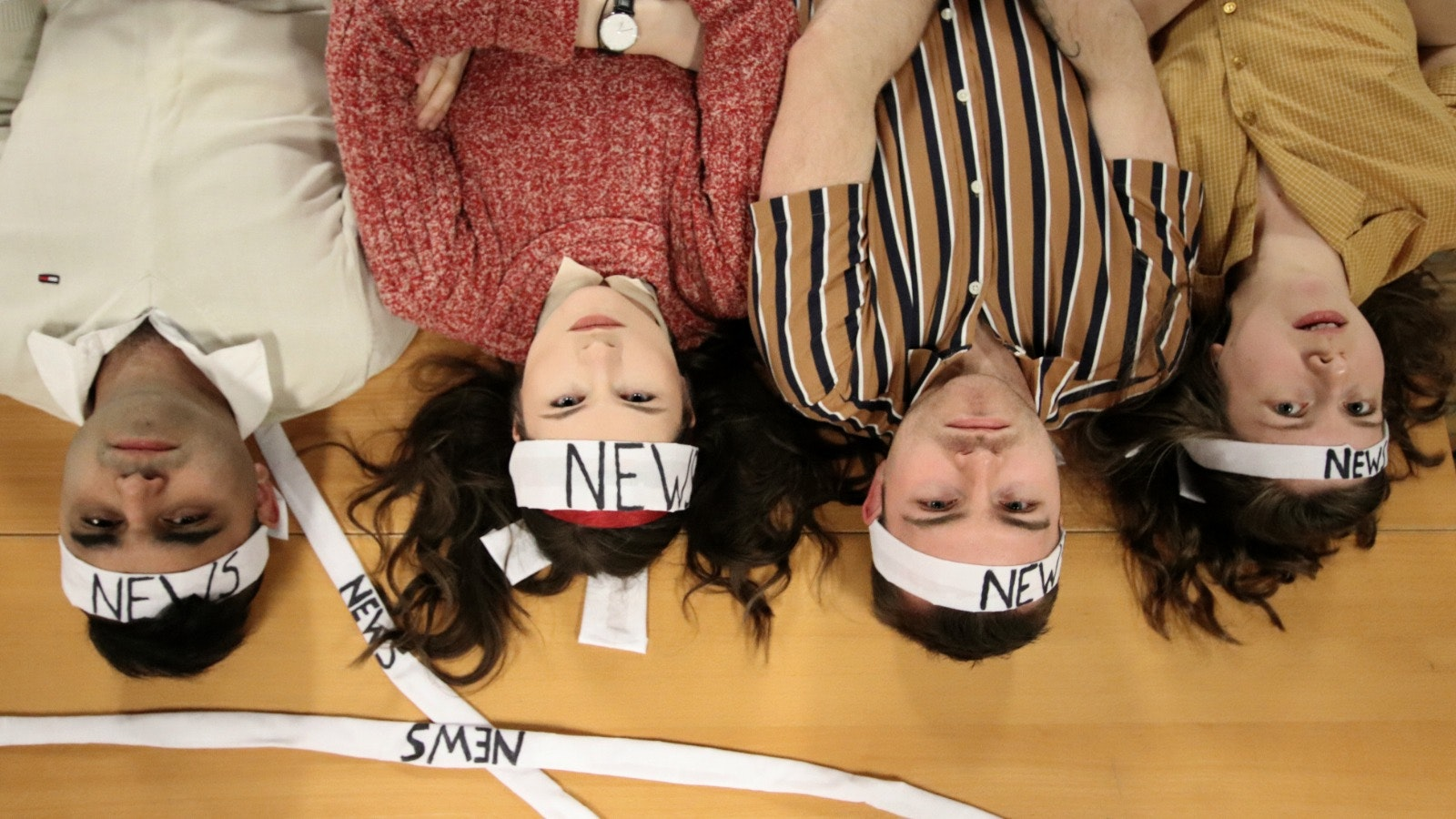 News Play (A-)
Madeleine Brown has concocted another show with a unique, funny and disarmingly rich story. Siblings and Joy (Charlin McIsaac) and Phoebus (Greg Solomon), one a writer and the other an illustrator, are forced via lack of work, as well as blackmail, to write for Art (Andrew Cromwell)’s Peterborough paper which is currently operating at zero sales. Their pyromaniac cousin Winny (Brown), who originally inspired them to create stories together and who has been banished to that city, becomes the victim of their desperate attempts to cook up paper-selling headlines, as well as a source of interest for the alternately charming and unsettling Lyle (Rouvan Silogix). The satire of the 21st century news industry and its frequently amoral attempts to ensnare a dwindling and mercurial readership is imaginatively and sometimes chaotically tied into the story of a family of artists trying to make amends for the damage their ambition and creative recklessness has wrought. The fact that it all unfolds in Peterborough, written as a kind of absurdist fictional city, makes it all the funnier. Aaron Jan’s direction is peppy and imaginative – rarely have headbands been used for such basic, efficient storytelling purposes. Newspapers are scattered across the entire Annex stage, and hide several plot surprises. The story begins to unwind a little towards the end as dialogue accelerates and character alliances shift and swerve, but the whole cast remains strong and in-sync, and the result is a pleasurably inventive story and a cleverly conceived production.

It Girls (A-)
Like several Fringe productions I’ve seen already, It Girls plunges us into early-2000s nostalgia, this time with decidedly uproarious results. Made up of Oshawa natives who seem set to take over the pop world, the titular girl group disbands in 2004 with only Sloane Jetta (Aba Amuquandoh) going on to have a relatively successful solo career. A stray suggestion on an entertainment news show inspires ex-member Lisa (writer Emily Richardson) to coerce the two remaining ladies, Kelly D. (Erica Gellert) and Kelly K. (Devon Henderson) into putting together a reunion show, overseen by Denny (Tom Hearn), a choreographer with a truly iconic long-term knee injury. The brash, smart script and comic confidence of the performers, under the solid direction of Ashley Comeau, make this ragtag show a pleasure to watch. The songs, composed by Ayaka Kinugawa in the style of that era’s Britney-esque subterranean weirdness, are quite catchy with hilariously outmoded lyrics about having drunk breakdowns at nineteen or making scant gestures at feminist independence (“Fuck the system, / Buy my lipgloss, / Get empowered!”). The energy falls off a bit by the end, but these performers (also including a very funny Marshall Lorenzo doubling as Sloane’s dastardly manager and a soulless Canadian entertainment reporter) are fun to watch to the end, and Richardson’s script is as darkly funny as her stand-out performance. Featuring Gillian Bartolucci’s choreography, which will have you feeling like you’re at the 2007 VMAs all over again, in a good way.

Through the Bamboo (B+)
Byron Abalos and Andrea Mapili’s earnest and lovely play is a high-energy exploration of cultural and family heritage that makes strong use of its enthusiastic ensemble. Philly (Angela Rosete) feels like the only member of her family who cares about holding onto the many objects left behind by her grandmother, or Lola (Carolyn Fe), whose recent death has lead to an excavation of her possessions as the family figures out what do with them. A chance encounter with a book of Filipino myths leads to Philly being sucked into a forest kingdom, where she is believed to be a renowned princess whose destiny is tied to the fate of storytelling in the land, among other key developments. Rosete nicely inhabits the busy lead role with commitment and verve, and the cast all get nice moments to show off (with particularly good comic work from Marie Beath Badian, Lana Carillo and Ericka Leobrera). And despite appearing late in the show, Carolyn Fe gives a very moving and truly commanding performance. Abalos and Mapili’s text is fun, imaginative, and filled with mythology – and also plot, where it can become a little overstuffed. For a show that seems tonally aimed at families, the production as a whole becomes too convoluted at times in negotiating the complexity of its world and its story, and could probably stand to lose fifteen minutes or so. But Nina Lee Aquino’s staging is inventive, the imagination and Filipino heritage explored in the text is exciting to see, and and the climactic moment of the show is very effective.

Off the Island (B-)
Director, writer and co-star Brian Gibson’s earnest and sweet musical show features a game and spirited young cast and some fun, energetic moments. But it needs a more searching script and focused production, as well as stronger musical work from the creative team. Stephen (Gabriel Hudson) moves from his Caribbean island to Toronto, “an arctic Sodom and Gomorrah” according to his mother (Georgia Grant), to attend university and live with his cousin Stacey (Carmela Antonio) and her friend Daniel (Armon Gh). After Stephen immediately radiates sexual insecurity and closeted-ness, his friends take him out to a club where events conspire to force him to confront his sexuality. The songs by Michael Poisson and Connor Young are inventive, but the group singing in need of work (though the warm and commanding Grant and charismatic Antonio both have strong solos). The sound is also oddly muffled at times and unsteadily balanced, with instrumentals frequently overwhelming vocals. The show closes with a moving series of monologues about coming out and dealing with the repressive strictures of a person’s community, and yet the show that’s come before isn’t able to achieve the same depths or have the focus it needs to tell the story as powerfully as it could. But with more work it might become something very special. Credit to Autumn Joy-Dames for good choreography and a strong stage presence despite remaining mostly in the background of the ensemble.

Young and the Limbless (B-)
The charming interplay between the three performers help buoy this lightly enjoyable but ultimately low-energy offering. Roommates Jenna (Morgan Frey) and Robbie (Kayleigh Poelman) share a passion for late 90s/early 2000s network television, like Dawson’s Creek and Grey’s Anatomy, through which they filter much of their experiences. For Jenna, the love for this era of television is epitomized in the form of Jeffery Dean Morgan, whose postered face sits onstage throughout as a sort of protective, angelic presence. Jenna is also struggling to complete an article about dating as a disabled woman, and reaching her limit in being tasked only with disability-focused pieces by her editor. Frey is an endearingly dry and fun performer, and she centres the show with her unflappable exterior and character’s obvious affection for Robbie and Luke (Will Atwood), their burly friend whose breakup has landed him on their couch. Apart from a couple of killer lines though, Frey’s text is more observationally amusing than funny, and the staging is straightforward to say the least. But the dynamic shared by the actors is almost soothing in its ease and lackadaisical charm, and the wry observations regarding the daily banalities of disability are refreshing in their sardonicism.