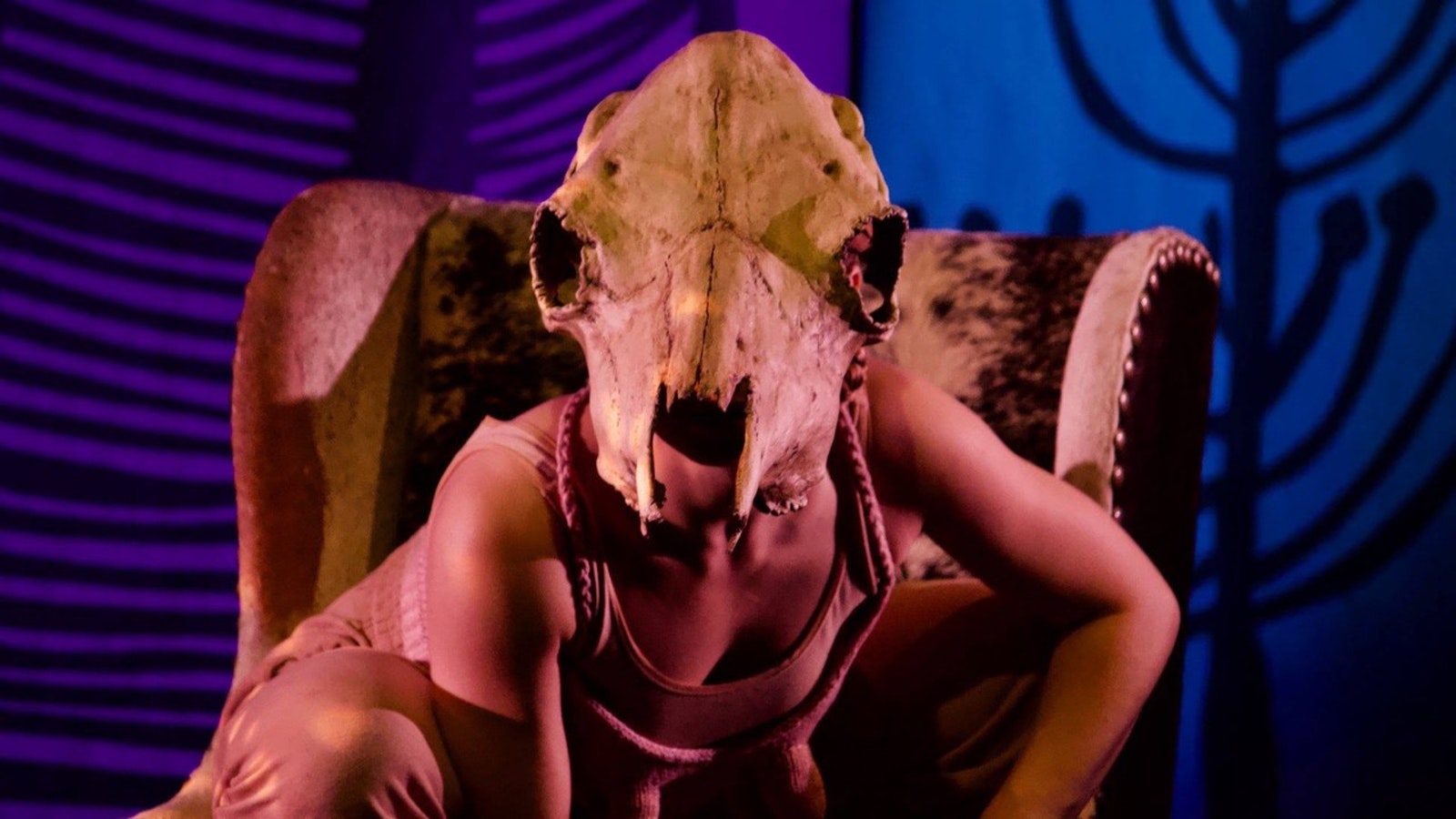 Night Cows (A)
A percussive heartbeat punctuates the soundscape of Night Cows/Les vaches de nuits. Eléonore Lamothe sits curled into a broad cowhide chair. The only other objects adorning the stage are a mobile of crows and a beautifully crafted cow skull hung from an ominous-looking hook. Lamothe’s one-woman performance is provocative and gripping. Previously this production has only been performed by Pol Pelletier, for whom the text was created in 1979 by Jovette Marchessault, but Lamothe takes the work and makes it her own. She seems to reach deep inside herself to bring forth a power and an energy that permeates her movement and speech. Lamothe seamlessly switches between English and French, agony and ecstasy, as she tells the story of indigenous and matriarchal histories lost to colonial violence and patriarchal oppression. Sweat stains her costume, from which a knitted udder hangs throughout the performance. The physicality of the monologue and dance must take a toll on her. She is the singular actor and dancer on stage. She pounds her chest with her fist. The sound of flesh against sweaty flesh rings out in the silent theatre. The audience is completely captivated, riding the waves of ecstasy, agony, hope, and power that are unleashed on them. Director Katey Wattam and the team of MoonCow Theatre Co., have created a piece of work that is deeply moving and thought-provoking, especially within the current political climate of the world.

Philip & Lucinda Dino-Show (A-)
The very personable hosts of Dino-Show, Philip and Lucinda (Myque Franz and Zita Nyarady of The Grand Salto Theatre), greet guests as they enter the George Ignatieff Theatre, engaging the young attendees with quick questions about their favourite dinosaurs. It’s refreshing to see the two mingling with the children to get them excited for the upcoming show. Philip starts of the afternoon by introducing the show as a meeting of circus, science, and silliness. We are treated to all three. Hand-to-hand acrobatics are peppered throughout the show and lead to the grand finale stilt performance by Lucinda (Nyarady). Their skilled feats elicit wide-eyed ohhs and ahhs from the young audience and their adult guardians alike. The songs and dance numbers, some of which are set to tunes that adults will know and appreciate, have everyone out of their seats joining in the fun. The science facts, which include information about different species of dinosaurs and the eventual cause of their demise, found throughout the show are informative and interesting for the older kids in the audience, although some were a little over my 4 year-old nephew’s head! This is a “relaxed” performance. Everyone is encouraged to get up and move around and leave for the washroom or a break when needed. The lights are never too bright and the music is never too loud, which makes this show perfect for the dino lovers aged 2-10 in your life who are into having loads of prehistoric fun!

Mayhem at the Miskatonic: A Burlesque Mystery Game (B+)
Something is up at Miskatonic University. A strange plague is turning some unsuspecting and very sexy folks into “fucking sex demons”! What’s causing this plague? Who’s at fault? Who will take their clothes off next? It really could be any one of the cast members and you, the audience, have a say in this game’s outcome! Think back to the choose-your-own-adventure stories you may have read as a kid and then put an R-rated twist on things and you have the underlying concept of Mayhem at the Miskatonic: A Burlesque Mystery Game. Written by the team of Nick Cassidy and Ash Cassidy and produced by Pointed Cap Playhouse, Sly Pereira and Stella Kulagowski (both of whom also play roles in the show), the action gets started from the first note sung by Miss Frisker (Bianca B.(oom) Boom) and doesn’t stop until everyone in the cast and audience is on their feet dancing in the finale. It really is a fun ride that includes an educational bartop strip to a monologue performed by Neil Degrasse Tyson (“Science bitches!”) and a hilarious strip tease duel between Sly Pereira and Sebastian Marziali (also known as El Toro in the burlesque world)! Get in early to get the best seats if you enjoy naughty language and naughty bits, both of which are on full display throughout the show.  Audience participation is encouraged, but everyone has the option to opt out if immersive theatre and dry humping are just not your thing! It’s probably best to skip Mayhem at the Miskatonic if you could be offended by a foul-mouthed stripping nun, nipples covered by glittering pasties, or sock garters.