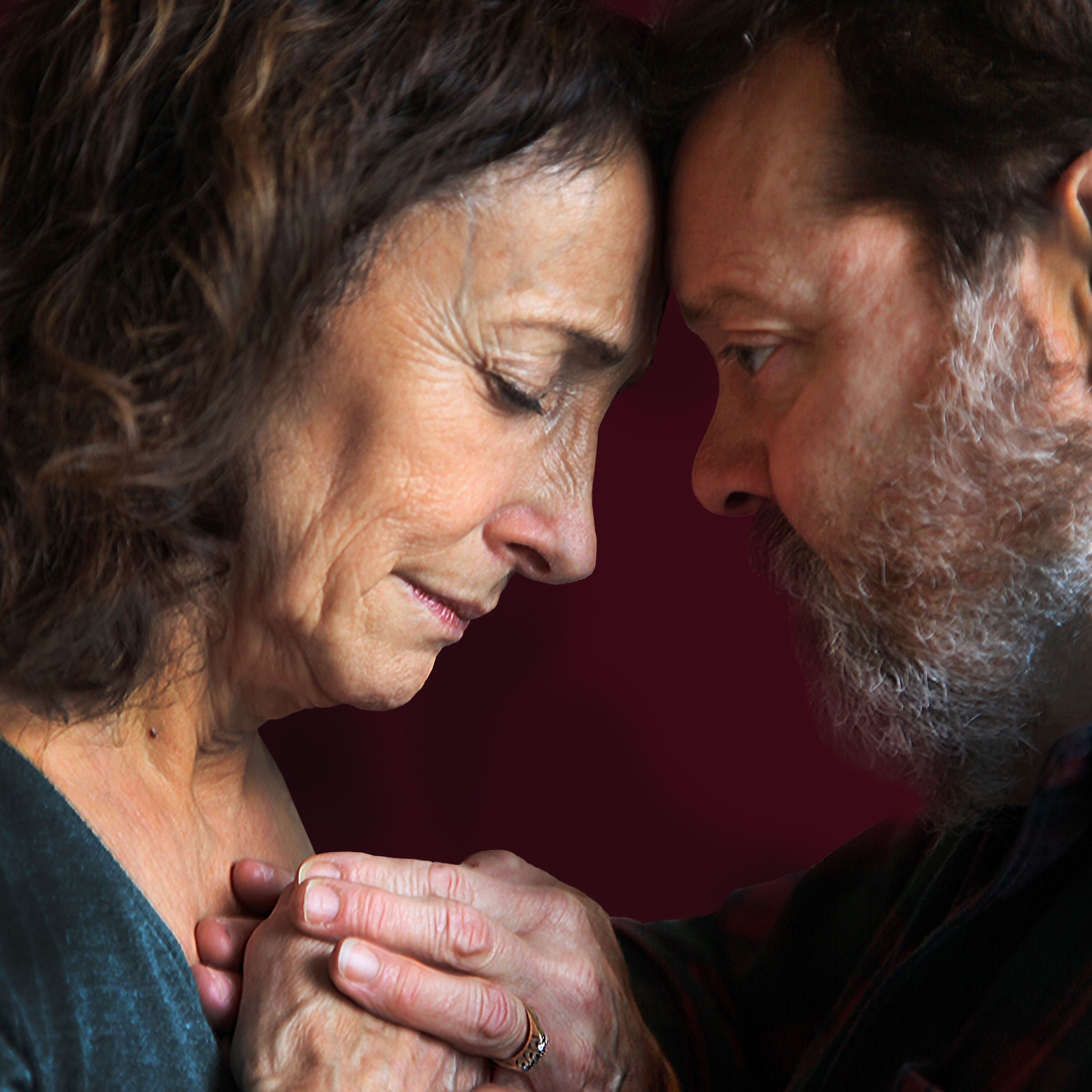 The December Man (B+)
This December will mark the thirtieth anniversary of the Montreal Massacre, where fourteen women at École Polytechnique were murdered in an act of targeted, violent misogyny (their pictures line the wall of the Eastminster performance space). One question that has haunted the conversations surrounding that horrific event, still the deadliest mass-shooting in Canadian history, was whether any of the men in the classroom, who were deliberately separated from the women and ordered to leave by the shooter, should or could have attempted to take him down instead of exiting the room as they were told. It’s an impossible question to answer, and it is one (of many) that haunts survivor Jean (Jonas Trottier), the son of Benoît (Stephen Flett) and Kathleen (Kris Langille) in Colleen Murphy’s empathetic and desperately sad 2007 play, sensitively directed here by Jennifer C.D. Thomson in Theatre@Eastminster’s production. In the tradition of something like Harold Pinter’s Betrayal, the show unfolds in a series of scenes that play out in reverse chronology – the first scene, which introduces us to the still-grieving parents, is followed by a scene that takes places months before, and so on. So it gives nothing away to say that when the play begins, Jean has long since taken his own life, leaving his parents to deal with guilt and grief and the lonely remains of their marriage. Flett and Langille are both compelling in the first half-hour, but these early scenes are (perhaps understandably) slightly trapped in the same tone of accusatory frustration and misery, and the performers can’t quite break out of a certain surface-level energy (though this may be a result of my having seen the very first performance). But as we move further back in time and Trottier arrives onstage, the production suddenly feels grounded and the other two performances rather appropriately gain a fresh focus. Trottier is very strong as the extremely traumatized Jean, excellently conveying the guilt of both a survivor and a son who feels he is failing his parents as he struggles to complete his engineering degree in the months following the shooting. Langille is very moving as Kathleen, charting a path from shell-shocked grief to parental anxiety as she attempts to break through to her son, all of it wrapped in a shell of frayed nerves. An early moment where she sits alone onstage and knits, her face completely absorbed in trying to distract herself from her pain, is beautiful. And Flett is nicely convincing as the more determinedly affable but easily shaken Benoît, sharing a particularly lovely scene with Trottier as he describes a fishing accident from his childhood in an attempt to connect to Jean. As an audience member I would recommend sitting close to the front if you can – it’s an intimate production, and while my (poor) choice to sit further back didn’t cause me to miss anything substantial, I felt somewhat removed from the dynamics onstage. The staging (particularly in those early scenes) can occasionally feel a touch stilted, but Thomson uses the space well, allowing the scenes to play out in an unhurried, empathetic way. She also extracts excellent imagery out of a little cove behind the main performance space that becomes the family kitchen, and which is slightly visible via a connecting window. Kudos both to the production team for efficiently pulling off a series of set changes, as well as to the cast for donning a range of sweaters for winter-set scenes in the sweltering church space.

Destiny, USA (B+)
One consequence of the U.S. 2016 presidential election was its illumination of just how fragmented and siloed much of the American (and international) political discourse had become. Communication between individuals and groups from different political affiliations had ostensibly broken down, and this was tied into a more general anxiety about our abilities to interact healthily and productively as technology occupies more and more of our waking hours and means of interacting with one another. In her charming and quietly moving solo(-ish) show, Laura Anne Harris gestures both to how phones and computers have furthered aspects of our current alienation, and how they have helped break down other forms of isolation, subtly complicating the idea that such technological innovation is either fully destructive or constructive in the process. We open with an election night party that of course ends in panicked tragedy (this opening emphasis on Trump’s Presidency isn’t really followed up on effectively). She tells us of her moving to Syracuse to be with her husband after he gets a job there, eventually herself ending up with a Relay position, assisting deaf or hard of hearing people to communicate over the phone with other parties. During this period her mother back home in Victoria was dying of cancer, and her relationship with her husband becoming more strained. In-person conversations with him prove difficult; beseeching text messages from her family back home go carefully ignored; but her role as a communicative mediator between Relay clients prove emotionally instructive and illuminating, while also spotlighting the intense challenges hearing-disabled people face when trying to do something as basic as apply for a job. These scenes are executed using pre-shot footage of deaf performers (Sage Lovell, Natasha Bacchus, and Tamyka Bullen) acting out the various people Harris is assisting, and they are nicely done – indeed the whole show is geared towards being accessible to a deaf audience. An ASL interpreter (Chris Corsini on the day I saw the show) is there to sign Harris’s opening and exit speech, and the entire text of the play is projected like opera subtitles on a screen behind Harris. Harris herself is a very charismatic and confident performer, showing off great comic timing and a witty voice, while bringing a nice tonal balance to her introspective piece. The show was stolen for me however by Bullen, the last of the three deaf performers to appear onscreen. She is deeply moving and naturalistic in her short appearance, and helps bring a strong ending to this thoughtfully funny and empathetic show.

Table 7 – A Play in Cafes Creation (B-)
Ever eavesdropped on a complicated social interaction and thought you had the answer to these strangers’ problems? Table 7 takes you up on that, but hasn’t quite figured out how to follow through effectively on its offer. We are seated at the Paintbox Bistro in Regent Park, where we watch a couple, Carla (Alexandrine M’Banga) and Rosie (Julia Beaulieu), argue over travel plans and emotional issues in their relationship. Meanwhile at a nearby table, the intensely poised and anxious-seeming Diana (Violet Mount) half-observes while trying to work through a business call. Kaila Hunte as the friendly server Tali and Tea Nguyen as the restaurant manager circulate through the space. We are shown different versions of the same scene, each emphasizing the perspective of a different character, all climaxing in the same physical altercation. And then, without giving too much away, the audience is brought explicitly into the show. Writer Chantal Forde has crafted a very deliberate piece that focuses on issues of perceived homophobia and racism, while also using the Regent Park location to comment on downtown gentrification that we the audience can see right in front of us. While the performers all do nice, committed work (particularly Mount as the uptight and possibly bigoted exec), the show ultimately asks too much of the audience without giving us quite enough to work with, forcing us into assessing what we’ve seen in a way that seemed too pre-determined in its apparent ambivalence. Perhaps that’s the part of the point about how we often make snap judgements about situations that are much more complex than they seem, but with three different perspectives shown to us, with slightly different lines and performance approaches that ultimately bring us to sympathize with everyone involved, the conclusion to be reached seems ultimately less moral than aesthetic. Still, while the story’s ending is rather abrupt, it does leave lots of room for discussion afterwards. An intriguing concept awkwardly executed, I look forward to seeing how this piece evolves over time.