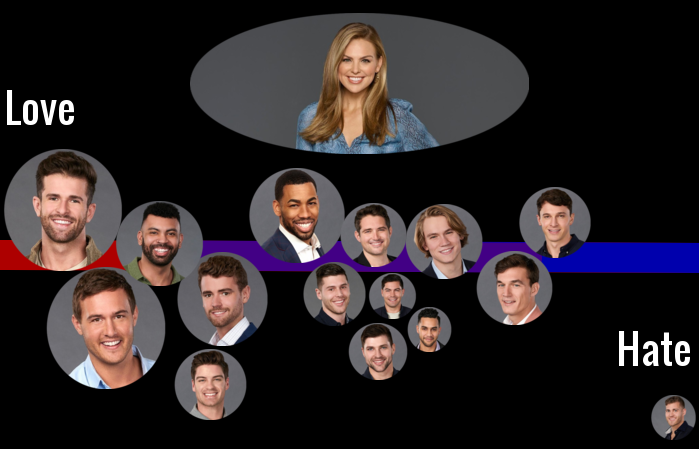 I Love Hannah Brown. I’m into this Bachelorette season like I haven’t been into this branch of the franchise in quite some time.

I know they don’t necessarily cast with the lead already in mind but it almost feels like they did here with a lot of men who are age-appropriate and lead with kindness, which most men in this franchise don’t do but I’d say is a crucial quality for Hannah. Whether those things were intentional or just lucky, she’s got the best group of guys since Kaitlyn (I doubt that group will ever be topped; it’s got two future leads plus two other franchise MVPs and no one truly irksome) and how much I like the guys obviously defines how much I like the season. Usually.

There have been some fun dates, I guess, but honestly I already forget most of the dates so far.

I really love this season because I just plain love Hannah. She’s a ray of total sunshine but her sunniness never annoys me. She gets flustered and overwhelmed and giddy and insecure just like every other human on the planet but she doesn’t hide from those things or obsess over them or let them make her lose sight of her self worth. She knows she’s a catch, she just also knows that she’s not perfect. Her prayer at the beginning of the season- “help me feel worthy, help me feel smart”- was one of the most human moments I’ve seen on the show and it tied my heart to hers from the jump.

The older I get, the more I find myself drawn to happy people. Young me might have judged Hannah to be simple or frivolous but, me right now exactly where I’m at, I find her light restorative. Especially because her light doesn’t come at the expense of standing up for herself and asking for what she wants, two things she’s done brilliantly so far this season which I completely wasn’t expecting from someone her age with her temperament. And when she’s not feeling sunny, she doesn’t pretend that she is. Hannah’s smile never seems put-on or like she’s just sucking it up. She tells us where she’s at and, when that’s the dumps, she’s not afraid to show us that. But she doesn’t dwell, she looks for the light and lets herself be pulled back up. Or she pulls herself back up. She’s got a great read on the men and isn’t afraid to tell them what she thinks of them (she called out Luke’s aggression early and stayed on him about it despite her strong feelings for him and tonight she straight up just told Tyler he kind of seemed like a player). Her earnest, open-hearted, kind truth-teller vibe is my everything right now and watching her navigate this has been a delight this show desperately needed.

I will never not struggle with all the talk of wanting a “real man” and that translating to an attraction to the more aggressive people in the room, but I think that’s more of a culturally imposed habit than what Hannah’s heart actually wants. Luke P aside, I see her gravitating to the honest, grounded men, the ones around whom she feels she can be completely herself when she’s obviously spent a lot of her life feeling like completely herself wasn’t enough or wasn’t right. Even though she’s only 24 and that makes my brain scream, I think this will work out for Hannah. I think she’s clear-eyed and demands honesty and deep down at least I think she really does know what she needs. I think it will work. I hope it does. Because I love Hannah Brown.

Okay, time for some boys. Check out @MyEntWorld on Twitter for first impressions and early takes because I love to call my shot on pure instinct but at this point I feel like I know the guys well enough to lay out my definitive rankings. Here’s hoping none of my top guys reveal themselves to be nincompoops in coming episodes.

Jed
I am never not skeptical of the guy with the guitar because, of all the self-promotional reasons to go on this show, being an aspiring musician is the most obvious. But truth be told most people who go on this show go on with some sort of alternative reason; it’s just not a rational thing to go on 100% because you honestly believe you’re going to fall in love with the lead so there has to be another reason. For the most sincere contestants, it’s romantic hope mixed with curiosity about the experience and a desire to travel. But, as long as they’re honestly single and not going to fake their feelings in order to stay on the show longer for more exposure, knowing every contestant is there in some way for the “wrong reasons”, I’m beginning to soften on the archetype of guitar guy. Or maybe it’s just that Jed has softened me. Because Jed is awesome. He’s soft spoken and calm but just a little bit goofy in a way that totally balances Hannah out without contrasting her too drastically. Their connection is all unspoken ease and effortless chemistry, the sort of thing that’s completely observable. Being able to spot a connection like that and identify how it’s different from the other relationships when there’s no quantifiable reason for it to be, that’s my very favourite thing about this show. Jed first showed up on my radar when he handled the awkward situation of walking in on Hannah canoodling with a shirtless Luke P with incredible grace and maturity despite only being 25 (which is insane to me but the perfect age for Hannah). He solidified his spot at the top of this list on his one-on-one this week for a couple of reasons. Again, their chemistry is so lovely to watch. And he chose the tiny moment they got to spend alone off camera in the photobooth as his favourite part of the date, which I think says a ton about how genuine he is. But obviously the highlight moment was when he told Hannah essentially that he wasn’t there for the “right reasons”. Like I said, no one really is, but it’s always been an unspoken rule of the show that only the villains can be acknowledged as having signed up for any reason other than desperately wanting to/honestly expecting to fall in love with the lead. Jed broke that system in this episode by admitting that he saw the show as a chance to advance his career. Of course he did. But that doesn’t mean he’s trying to get one over on Hannah, it doesn’t invalidate their connection. I might even argue it further validates it- he was neither looking for it nor expecting it but it happened anyway. Mostly I just really love truth tellers. Jed risked losing her in order to show her the respect of being honest with her. I don’t even think Jed’s that cute but how he treats Hannah is downright sexy.

Peter
Speaking of sexy. I love love love love love when the sexiest guy on the season isn’t necessarily the handsomest guy on the season. Peter’s good looking, they all are, but he’s not the one you would pick out of the pack if you just saw them standing there. But he’s magnetic. I don’t know what it is. Young Nick Viall (whom Peter somewhat resembles) had it too, before his handsomeness got super literal and instagrammy. Peter strikes me as kind, sweet, and uncomplicated which I absolutely mean as a compliment in general and a specific endorsement for his compatibility with Hannah. But really the thing that stands out about Peter are those makeouts. The pilot knows whats up.

Dustin
Very sweet, a great listener, seems maybe a little smarter than the rest of the pack. We don’t know much about Dustin but I expect him to be a popular Paradise character.

Garrett
I can’t get a firm read on Garrett. He’s always on the right side of issues and seems to have his head really firmly on his shoulders, always giving really solid advice and cutting through the bullshit on behalf of his friends when someone has to. But he inserts himself into the drama every single time. Like, every single time. That always worries me. Seems like a really solid guy, though.

Luke S
I really like Luke S. Even when he’s dead centre of the drama, he never loses his temper. Which makes me think he doesn’t have a temper at all, which I find immeasurably attractive. Hannah’s completely not into him but hopefully he’ll make it to Paradise and some cool girl who likes smart, non-aggressive men will appreciate him for the rare gem that he is.

Mike
I like that Mike feels like a grownup. He’s thoughtful and I do believe sincere and his sense of self is refreshing in this really noticeably young season (though I do think he’s too old for Hannah). But, like Garrett, I wish he would keep his head above the fray a bit more. Also, don’t call people psychopaths. I can’t stand Luke P either but don’t go around diagnosing people, at least not to their face.

Matteo & Kevin
I don’t really know who these guys are but they’re very cute and haven’t done anything to annoy me yet.

Grant
Grant was a standout on last week’s photoshoot date, handling the makeup girl trap with humour and ease and approaching the whole thing with a really great attitude. I actually quite like Grant but we haven’t seen enough of him to have any glimpses of vulnerability or tests of sincerity. And it really bothers me that he’s listed as “unemployed”. Like, dude, say you’re a blogger or an amateur golfer or an “entrepreneur” or literally anything!

Dylan & Devin
I really really don’t know who these guys are.

Tyler
Tyler hasn’t really done anything wrong either but, just like Hannah, I get serious player vibes off him. He’s handsome in such a grotesquely obvious way that there’s no way it didn’t totally destroy any chance he ever had at a personality, right? He was sweet on his date (the fishing puns really caught me by surprise) but I still have a hard time trusting him. Also, this may have just been the way it was edited, but did it feel to anyone else like he was trying to fix her problem instead of really listening to her? Classic dude move. Classic dude mistake.

Connor
This kid feels very young to me and a little bit try-hard. Like, if the Bachelorette mansion was a high school, he would totally be Tyler’s sidekick who, by virtue of being Tyler’s #1 guy, was at the top of the cool kid food chain but his position there never felt that secure so he would put on airs and maybe get a bit competitive in order to stay where Tyler never had to try to be.