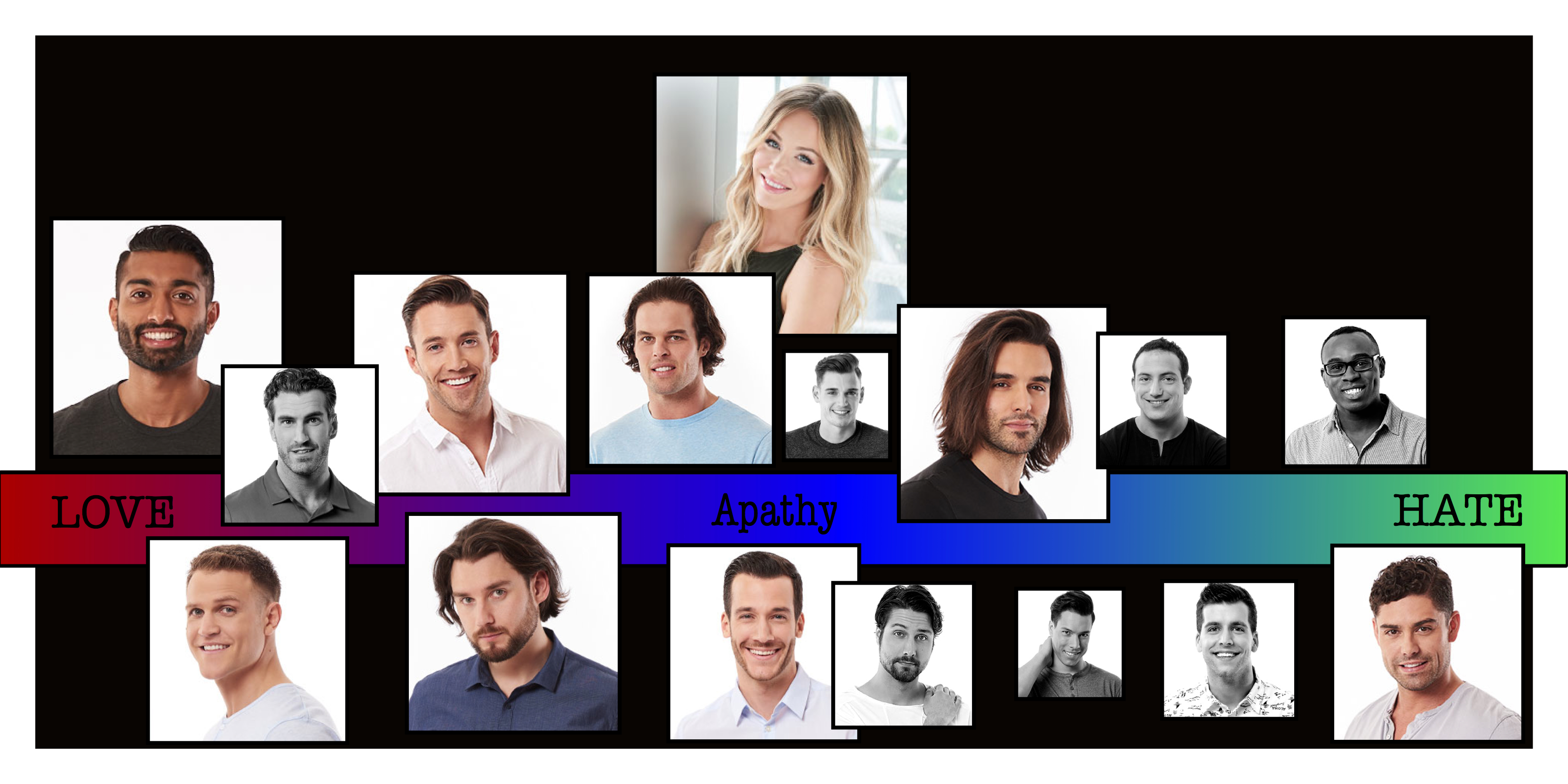 I’ve never watched The Bachelor Canada but I am loving our first foray into the franchise’s tables-turned better half. The Bachelorette is the less skeezy, less catty, way more dreamy iteration of a guilty pleasure premise and a Bachelor cycle without a Bachelorette is simply not worth airing. Once the Canadian version of the show gets going with the American-patented “one woman’s fourth place is another season’s lead” system, we’ll really be cooking with gas.

27-year-old hairdresser Jasmine Lorimer isn’t the most inspiring lead- her messy hair, “explore” tattoo, and consistent interest in aggressive men feel frustratingly basic- but her cast of men is truly excellent. This isn’t to say that I’m not currently harbouring crushes on at least three different Americans but Canadian boys are the best. They are, to unfairly generalize, a little gentler than Americans, a little humbler, and far less likely to have been in a fraternity (mostly because we don’t have that many). If this week’s Montreal-set episode hadn’t exposed quite a few pathetic accent attempts, I’d also point out that most of our boys speak at least a little French (Salut, Benoit!). Jasmine’s 20-person cast had like 15 pretty good guys, at least 7 great ones.

But this is reality TV so the producers had a duty to find a villain and good god did they ever succeed. There were only two guys this season I really couldn’t stand and only one of them is still around (au revoir, Walé!) but Drew is enough of a villain to sustain an entire season of villainy (or three) completely on his own. Like, it’s Drew, Senator Mike Duffy and the guy who threw the beer during the Wild Card game holding it down for the dark side north of the border. There’s a lot to hate about this hyper-competitive man-baby who actively bullies Chris because he’s a little bit odd (by the way, Chris is definitely not that odd; Drew needs to meet more people) but the most irritating is his insistence that he is the way he is because he lives in Toronto. The Bachelorette Canada is quick to substitute geography for personality- nice guys come from Saskatchewan, the Quebecois are extra passionate- but episode 2 crossed the line with a monologue from Drew about how all the “Toronto guys” are cool because it takes balls to live in the big city and the sensitive wimps on the other side of the pool could never handle it. Drew, I’ve lived in Toronto for 14 years and so have all the writers, actors, musicians, scholars and general good guys that I know who somehow don’t find their hometown so intimidating that they have to prove they can “survive” by puffing out their chests and talking about their genitalia. You’re giving my town, and the wonderful men who populate it, a bad name; sit down.

But let’s talk about people I do like, because there are quite a few of them (I’m at least somewhat fond of 7 of the final 8). For years I’ve been ranking the American Bachelorette contestants on a scale from love to hate based on how I feel, not how I think the Bachelorette feels or how she should feel. If I had to pick a winner right now, I’d say Jasmine’s gonna go for Kevin W or maybe Mike but this is who I like in the order in which I like them:

Mikhel- the 28-year-old Aviation Engineer was my pick from minute one. Like my all-time favourite American Bachelorette contestant JP, Mikhel was the first guy to get an intro package and I was hooked immediately. He’s ridiculously attractive and far better spoken than your average contestant (though I will say that this group definitely has the Americans beat in the general eloquence department), he has a job that’s both grownup/reliable and interesting (a rare combo), and he might be the sweetest guy left in the final 8. I get the sense that his crazy body was only built up in the last few years because he has the self-effacing shyness of someone who’s been far more overlooked than said torso and arms would suggest. His voice is a little high (and the nipple ring is unforgivable) but he’s so naturally charming and clearly intelligent that I quickly ceased to care. I’m all butterflies during Mikhel’s dates and I don’t think Jasmine’s intellectual enough for him so I’m rooting for a close-but-no-cigar finish so he can be Canada’s next Bachelor (the first in-franchise pick and a much-needed minority lead!). Bonus points for being the season’s best kisser.

Mike- The first-impression-rose recipient isn’t the most memorable guy in the bunch but that’s because he’s kind of perfect, to the point where he’s hard to believe (but you believe him anyway because he seems so remarkably genuine). From geography to family history to their mutual goofy-but-basic-ness, I think Mike’s the best fit for Jasmine by a pretty large margin. At first he seemed a little boring but his silly side has come out more in the last two episodes and I like him more every week. He’s a bit too much of a conventional beefcake for my super subjective taste but he’s such an objectively great catch that putting him any lower than second place seemed crazy.

Kevin P- The most alluring guy of the season, I keep trying to talk myself out of my interest in the very polished, very serious deckhand with the incredible cheekbones but he’s proving irresistible. He’s so confident but unassuming, deliberate but soft-spoken, suave but accessible- he just pulls me right in no matter how many times I remind myself about that conversation he had a few episodes ago that convinced me he’s a total heartbreaker who won’t commit until he finds the most perfect woman in the world. He wears dramatic scarves and hippie bracelets without looking silly and his hair is sculpted to inhuman perfection. If you set all of these guys loose in a bar full of women, I’m extremely confident that Kevin P would get the most numbers no contest; he’s just… I don’t even know.

Chris- Oh, Chris, you poor little Albertan sweetheart. There’s a bizarre (mostly Drew-created) myth this season that Chris is a super weirdo with zero game but he’s actually a remarkably charming, very eloquent, very interesting, super cute dude over 6 feet tall who can dance. I’m skeptical that there’s anything serious between him and Jasmine (that girl is way too fickle and into hyper masculinity to deserve any of the season’s sweethearts) and Chris is sadly a little too susceptible to producer suggestion that perpetuates drama (he’s always giving them the easy soundbite) but Drew’s completely random tormenting of Chris is way more than we’ve ever seen on a show like this (that date card stunt was just cruel) so I agree that he should tell Jasmine and he approached it the best way possible (ask if she wants to hear then give concrete evidence). It’s brutal to watch and I’m sure he’s not going to “win” so, much as I love him, I want Chris to go home, hopefully to somewhere with fewer douchebros and some nice girls who actually like nice boys.

Kevin W- It’s between Kevin W and Mike for my pick of who should actually end up with Jasmine (I’m really nervous she’ll pick Mikhel but, if it’s not him, it’ll be Kevin W or Mike). He’s not my style At All- too macho, too stoic, one of the few guys all season I find wholly unattractive on a purely superficial level- but I have a suspicion that Kevin W, despite his annoyingly bro-code tendencies and insistence on hanging out with Drew, is a really good dude. The other guys call him Captain Canada and clearly have a remarkable amount of collective respect for him (they don’t just like Kevin W like I’m sure everyone probably likes Mike, they almost seem to look up to him). He has this un-flashy way of standing his ground (I loved his pointed but casual refusal to let Drew read the second date card this week) and seems to treat even the guys he doesn’t really “get” with kindness and consideration (him teaching Chris how to survive tackle football was my favourite non-Mikhel scene of the week). I wouldn’t pick him for me but I’d recommend him to almost anyone else.

Benoit- the season’s only francophone, the Montreal Maître D’ is one of the season’s most attractive guys, aided in no small part by his adorable glasses and excellent fashion sense. He’s crazy charming, delightfully positive and a definite early favourite of mine. I just didn’t love his one-on-one with Jasmine. The kissing seemed forced and too intense as though he wasn’t bothering to read her or the situation before diving in with an approach that usually works for him. He’s still the season’s standout charmer, I’m just a little more wary now.

Thomas- my initial reaction to Thomas was a definite “no” with his permanent sex eyes and toss-able hair, always talking about how he’s an international model. I’m still not his biggest fan but that’s mostly because he’s in a field of really great guys. The more I see of Thomas, the more I give him the benefit of the doubt. I think he’s smarter than he looks and way more sincere than I assumed. And, maybe, considering that stupid “explore” tattoo, he’s not the worst fit for our Bachelorette.

Drew- Jasmine is buying everything this jerk is selling, it makes my ears bleed.

Eliminated Bachelors- I don’t usually include the eliminated contestants on my Bachelor Scale but I’m still torn up about Kyle’s elimination so I couldn’t help but include them (at least the somewhat memorable ones). Much as I don’t particularly love Jasmine, she’s doing a pretty good job of keeping my favourites around so I can’t say I’ll miss fame-seeking David, so-shy-it’s-crazy-he-was-cast Scott or any of the others too much (though I don’t rule out that most could be great in real life and Seth did have that mysterious charisma Jasmine flipped for) but I’ll definitely miss Kyle. One of my favourite things on any Bachelorette season is when someone who is in no way my type completely wins me over and that’s what gentle giant Kyle did. His intro was set in a gym and his ultra-male sports guy look was as appealing to me as his dedication to his cats (cats are evil; dogs are perfect) but Kyle quickly proved to be one of the sweetest, most slyly quirky guys in the house. He was perfect on the glitter-fuelled kid date, was always low-drama and zero-pretense. I got the sense that his size has actually softened him somehow- forcing him to project warmth so he’s not so intimidating, freeing him from the ridiculous need to somehow prove his manliness (sup, Drew); he’s the manliest guy in the room, so he can also be kind, goofy, and emotional without being targeted by the Drews for being a Chris (though, to reiterate, no one should ever be targeted for being a Chris!). I didn’t expect to like Kyle because I’m just as much of a shallow monster as everyone else but I love love love that he proved me so very wrong.