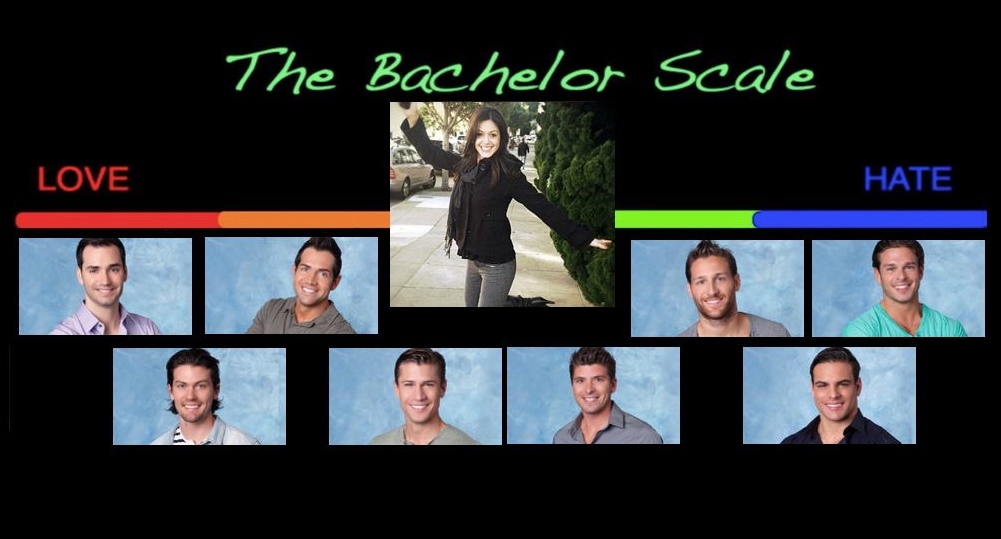 The best time to do this was probably last week when Des had a lot more guys left and the frontrunners weren’t quite so overwhelming (we get it, she likes Brooks!) but my feelings about this group haven’t changed much in the last seven days. The wait means I don’t have to talk about Ben (over-vilified but still far from a prince) or Bryden (never liked him, and how staged was it that he interrupted Chris’ date to tell Des the obvious?!) or Mikey (weird guy; not a bad guy, just a really weird one who was never very appealing).

What we have left is a crop of eight- not as awesome as Ashley’s boys (my favourite group by far) or Jillian’s (oh Reid!) but definitely not as rough as Emily’s (a terrible assortment with only Arie as a highlight). I’d say Desiree’s Boys are about on par with Ali’s mixed bag from a few seasons back- she too had a few obvious frontrunners and a number of massive duds. The main difference is that Desiree’s still got some fence sitters, a couple potential suitors who we haven’t heard much from, even this late in the season (though, in all fairness, one of her guys doesn’t speak much English so of course he hasn’t amassed a Cochran-like confessional count).

The Bachelorette herself is cute but not particularly interesting, so it’s a good thing she does have a couple boys worth watching (though, sadly, no one quite as infatuating as a JP or a Reid; at least not yet). She’s let go of a couple of my early favourites (mostly Zack K, though I also thought Robert had potential) but has also dispatched a fair number of crazies (foremost among them: weird magician man, Brandon and his emotional issues, and “I don’t take no for an answer” Jonathan), leaving the following eight (listed in order of how much I like them, not how much I like them specifically for/with Des):

#1- Chris
Obviously I love Chris. He’s the only guy remaining who I think is actually insanely cute (tall, well-groomed, not too jacked, no tattoos) but he’s also the sweetest guy of the year without being cheesy about it (sorry, Drew, but you’re just too polished). Even his pretty bad poetry comes off as charming instead of forced or embarrassing. Oh, and he was a professional baseball player, did I mention that? Drafted by the Cubs in 2007, Chris is that rare creature who was good enough to orbit pro sports but somehow ended up with an impressive and secure real person job as a Mortgage Broker. He might just be the most well-rounded Bachelorette catch since Roberto. Or maybe ever.

#2- Brooks
The overwhelming frontrunner so far this season, Brooks completely caught me by surprise. Despite his Chris-like height, there’s not a lot about Brooks that’s all that physically attractive (I demand that you cut that hair this instant, sir!) but damn if he’s not so fantastically charming that he’s pretty dreamy anyway. His relationship with Des is lightyears beyond everyone else’s (in case there was any doubt in your mind, re-watch that awkward deliberation scene where Chris Harrison asks her who’s the best kisser) and he’s one of the only guys who seems totally himself all the time. Himself being casually hilarious and far brighter than the entire rest of the group.

My vote is for Chris to get Des and Brooks to be the next Bachelor (if only because he’s a little more dynamic to watch for long periods of time) but the butterflies in my stomach would be happy either way.

#3- Zak
If you’d told me on night one that I would end up liking Zak at all, I would have called you crazy. But like Zak I do. I like him a lot. I like him more every episode. Similar to last season’s (actually pretty annoying) Lindsay, Zak somehow stuck around even after pulling the stupidest out-of-the-limo stunt of the year (Jonathan and his “fantasy suite card” are in a league so their own that they don’t even count anymore). Zak showed up shirtless and uttered the masterful line “will you accept these abs?” and, my favourite detail, Didn’t Bring A Shirt to wear after the gimmick was done. So he spent the entire first night shirtless, looking like a baboon. But for some reason (likely producer pressure), Des kept him around. And I’m shockingly glad she did because in the subsequent weeks Zak proved himself surprisingly sweet and genuinely funny. I love people who manage to change my mind and, after that night-one stunt, Zak had an uphill battle. A hill he easily scaled with a little thing called personality. (He’s also among the most educated of this year’s guys and has easily the most endearing and amusing answers in his online Q&A; though, in all fairness, he’s one of the only people with legible hand writing so who knows what most of them said).

#4- Drew
And thus ends the personality portion of this list. Drew, though handsome in an Elder Price kind of way, has had so little screentime that all we know about him is that he “has a strong moral compass” and wants to make sure Des finds out about James’ dastardly ways. But at least he’s noble about how he’s approaching the great James outing. It doesn’t feel like a vendetta (more on you in a moment, Michael) and he’s being respectful about the broaching of the topic and the timing. The jury will be out at least until next Monday when Drew finally gets a date (at least I’m pretty sure he will) and maybe then he’ll step up as the frontrunner the season preview suggested he might be. But in the meantime, he’s just a pretty smile and a stiff hairdo with a Very impressive runway walk.

#5- Kasey
Oh, poor, sweet Kasey. He seems nice enough (though he doesn’t exactly stand out in a personality pool that includes Brooks and Zak) but the kid has No chemistry with Des whatsoever. He won the Mr. America pageant by a hair and gets along with the guys well but if he’s not the cutest and he’s not the funniest and he’s not the sweetest, you’ve got to wonder why he’s still around.

Kasey was the final guy I really like at all; this is where the trouble starts.

#6- Juan Pablo
Juan Pablo is someone that the show keeps telling us is charming and sexy though I see no proof of either. What I see is a guy who looks a lot like many of the other guys (though not the ones I think are attractive, meaning Chris) but doesn’t really speak English. Or, if he does, he just doesn’t do it very often on camera. So, out of fairness, I spun by the ABC website to read about him before reaching a conclusion. I didn’t even have to make it all the way to the section where he lists “good size breasts” under “what does your ideal mate look like?” to decide how little I like Juan Pablo. How can someone who’s into Brooks’s witticisms and Chris’ poems also be into this guy? Des, you confuse me.

#7- James
James James James James James. What to do about James? Let’s start by establishing that his slick thug look is amongst the least appealing of the season and his weirdly serious sentimentality had him low on my list even before this most recent episode threw his credibility into question. Now, unlike with the Ben situation, I firmly believe every word that’s been spoken against James thus far, mostly because of who’s said it and how. Drew and Kasey are both undramatic and not-overly-competitive-seeming guys with no reason to make up evidence as concrete as the conversation they jointly claim to have overheard wherein James gushed about all the chicks he could get after being on this show. I rarely believe the tattletales who spend more time worrying about the other guys than their own relationship, but this one is a no-brainer I think. That said, it’s not actually very interesting as far as scandals go, so I hope it gets dispatched with quickly next week so we don’t have to spend much time lamenting someone I never found particularly appealing in the first place (how contrived was that charitable date he went on last week, btw? Ick all around. Bad producers, Bad!).

#8- Michael
Some of you may be surprised to see James higher than last place on this list. And, believe me, if I’d done this list last week he absolutely would have been on the bottom. But I just couldn’t abide the way that Federal Prosecutor Michael went after Ben on the two-on-one this week, pushing him straight down the list to edge out James for least favourite guy of the year (at least in the top 8). I do not care how much of a villain you think someone is, if you treat them the way Michael treated Ben, you are officially becoming the villain yourself. I don’t know how authentic Ben was and I honestly don’t care that much. I’m willing to bet that he Was there mostly to promote his bar and that maybe he was overselling himself as a father a bit, but I’m also willing to bet that he’s not quite as horrible as the editing presented. This happens almost every year with whomever gets the first impression rose, especially if they’re not immediately disarming, so I’m never one to condemn completely based on hearsay from jealous competitors (here’s to you, Courtney Robertson!). But even if Ben had been lying to a Justin “Rated-R” degree or had been a simply bad guy of Bentley proportions, you can’t attack someone’s faith like Michael did; you can’t insinuate (let alone flat out say) that they’re a deadbeat dad when you don’t know their situation; you can’t prosecute someone who isn’t on trial. No one gets to be as casually cruel as Michael was to another human being this week without losing 100% of whatever respect I might have had for them (I never much liked Michael but he certainly wasn’t at the very bottom of the pack in my estimation before now). Even if Ben did need to be brought down, only a villain would attempt it so gleefully.