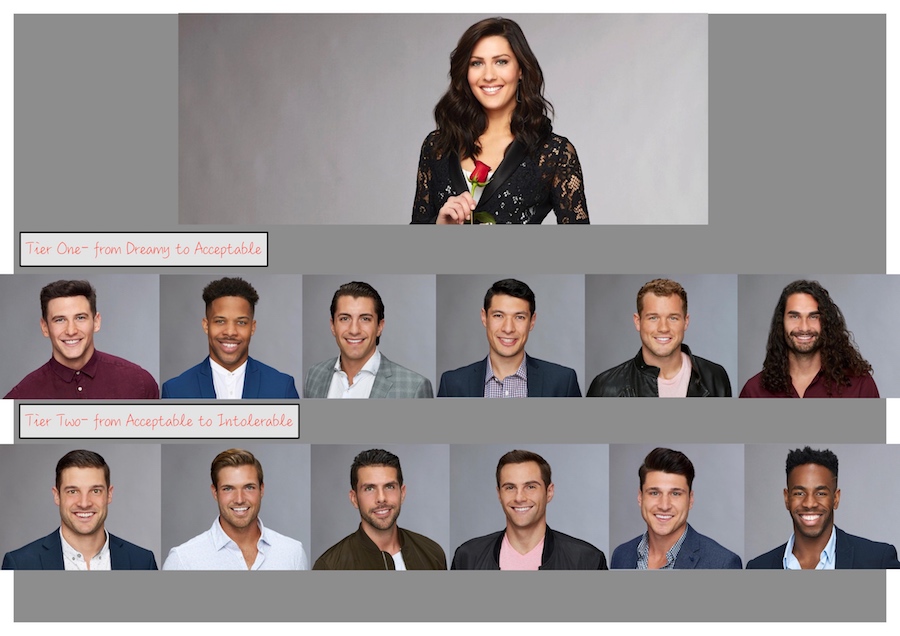 Right up front, I have to say that this was one of my least favourite Bachelor Scales to put together. I’m really not feeling Becca’s guys and, though the Bachelorette herself is perfectly pleasant (if a little dull), my interest in this season is pretty limited. Truth be told, most of my Bachelor Nation energy is wrapped up in total Ashley & Jared obsession at the moment and there’s only so much I can offer to anything else. Alas, a Bachelor Scale must be done! (Why? IDK, tradition?).

Other than Lincoln being worse than expected (by a lot), and David really letting me down, no one has really surprised me at all from the first episode (or early AFR intro). My first impressions appear to be holding so I’m taking the risk of an early-ish scale, understanding that it’s very possible that one of my top choices could turn out to be a dud (Derek was wayy too high on the Jojo scale) or that someone I’ve ranked low could randomly emerge as amazing (my biggest Bachelor Scale misread in site history was Jillian’s season when I didn’t notice Reid’s wonderfulness on time to give him top or even particularly high marks). I don’t think that last thing will happen, because the guys at the bottom of my list have gotten plenty of screentime. I suppose Garrett could win me over (and convince me to ignore non-show information) but if these rankings change it’s because someone in that top row let me down. Anyway, here are the rankings with the information we have so far:

*again, these are my personal rankings, not assertions of who’s best for Becca. Garrett might be totally right for Becca, he’s just for sure not right for me.

Blake- I fell hard for this kid at the After the Final Rose early intros (and tweeted it, so it’s on the record). The horse thing is a stunt I could take or leave but he’s got this crazy charismatic energy that’s unignorable. He’s not my type at all, but he literally had me at hello.

Wills- Wills snuck up on me, as I think he did on everyone. His initial connection over Harry Potter was adorable and his date this week was an all-time display of empathy and pressure-less just plain old listening skills. I’m not super attracted to him but he’s definitely super attractive if you know what I mean. He’s also a 29-year-old graphic designer, which makes him a grownup in a field of kids.

Jason- I don’t know why my instincts are all over this guy but they are. He hasn’t done much yet (he seemed to be on the right side of picture-gate and was cool about her forgetting his name, but that’s all) and his hair personally offends me, but my gut says yes on Jason so I’m gonna listen.

John- I was sure this soft spoken software engineer would be a night one boot but he’s survived pretty far and he’s 1) super handsome, 2) eloquent, 3) seems awfully kind, 4) stays out of 100% of the bullshit. He might be the catch of the season in the real world, he’s just not flashy enough to make waves in Bachelor world.

Colton- 26-year-old gold-tinged fitness coaches are not my bag but Colton seems like a sweet kid.

Leo- Leo’s fun and has a cool job and a good head on his shoulders. He doesn’t make my heart go whoosh (I’m not particularly into the hyper-masculine thing) but I like having him on my TV.

Garrett- He seems nice, maybe a little too goofy for my taste but nice. But he’s a crazy conservative Trump nonsense machine off the show and I just can’t get over it (damn you, Twitter; I don’t want to know this stuff!). She should pick him, though. With her level of religiosity (which is intriguingly being hella underplayed), I feel like she can handle it.

Chris- Self righteous is second only to aggressive on the scale of unattractive qualities. He also looks like he has hairplugs.

David- I loved David for the first two weeks of the show. I don’t mind night one costumes (I don’t like them, but they’re not a deal breaker) and he seems smart and self-effacing and normal in a way that I found so appealing he might have topped this list. But he’s only 25 and his immaturity is getting more and more overwhelming with every passing day as the producers nudge him into obsessing over Jordan seemingly with very little effort. He’s either a sucker or a competitive, petty asshole or both and I’m so so so disappointed in him.

Connor- See “Chris” for my feelings about this guy’s aggression issues.

Lincoln- He seemed sweet but he’s a literal criminal who thinks the earth is flat. I just cannot believe he’s even here. I get that the producers like to cast some non-husband-material for drama (which I maintain is a misread of why most people watch this show, but whatever) but this is ridiculous. Give the girl a break!

So, long story short, this group is the pits.

But, really, we all know who this season will be remembered for…

See you in Paradise, Joe ❤