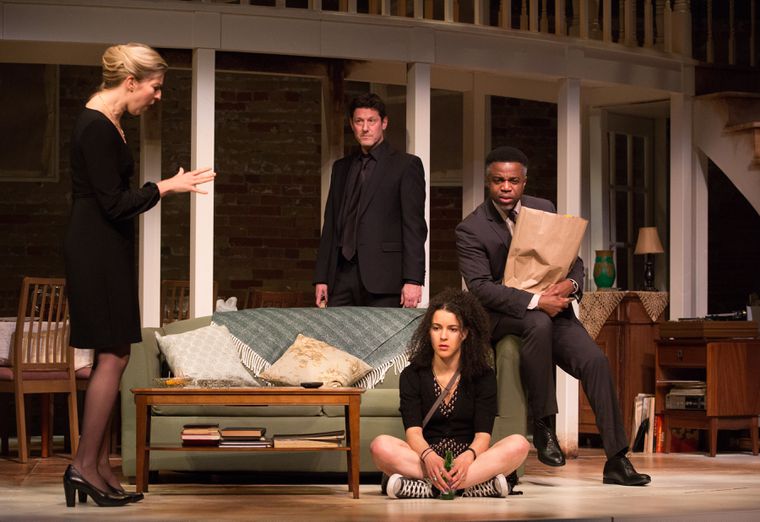 It can take a good family to show you what a bad one truly looks like. The team at Soulpepper brings tremendous verve to Tracy Letts’ August: Osage County, doing its best with an endless and endlessly ambitious script.

August takes familiar tales and tropes of family dysfunction and weaves them into a three hour epic that aims to wring every last emotion from its audience. When alcoholic poet Beverly Weston goes missing, leaving his wife Violet – a cruel, cancer-ridden drug addict – in the hands of live-in housekeeper Johnna, their daughters return to their rotting Oklahoma home with their own families and baggage in tow. Any hope of keeping the peace quickly disintegrates as dark secrets are revealed and relationships are strained until they snap.

These dynamics require strong performances across the board to sustain interest for this long. The cast is headlined by Soulpepper staples Maev Beaty – a powerfully raw and complicated Barbara – and Nancy Palk, whose delightfully deranged Violet is a real treat to watch, but none of its thirteen members puts a foot wrong. The more clearly defined characters are convincing in their roles too – Ari Cohen’s Steve is exactly what we expect Steve (and the dozens of Steves we’ve all met before) to be like, while Laurie Paton’s Mattie Fae Aiken will remind all too many of us of our disdainful ‘down-to-earth’ aunt. Camellia Koo’s stained and cluttered two-story set perfectly reflects the tarnished domesticity of the Weston residence.

If it feels tough to say anything conclusive about August itself, it’s because little can stay consistent in a show so long. The New York Times first called the play a “turbo-charged tragicomedy”, suggesting a more seamless blend than the one on offer: at times the brilliantly cutting quips add a certain soul to the Westons’ vicious arguments, while at others they yank the mood of the moment away from its purpose. This is especially jarring when the joke just doesn’t land for you – viewers around me howled with laughter at innocuous lines so often that the actors had to pause to keep the dialogue audible. This enables another problem, namely the show’s tendency to add to the drama through rapidly raising the stakes by dropping some dramatic reveal – or just by raising the volume. Many of the best around-the-dinner-table scenes in theatre rely on the awkward silence, the painful attempts to ignore the obvious, the comment that’s general enough to have plausible deniability but specific enough to cut to the bone. August has that – of course it has it somewhere – but it allows shock value to substitute for organic development too often. This desensitizes the audience to the tragedy in the plot – the suicide of a main character becomes just one more point in one more argument – but also fits those arguments into a rote call-and-response pattern, with audience laughter acting as convenient punctuation for a run-on sentence of screams and accusations.

At August’s best, it’s a brilliantly dark and brutally compelling portrayal of family dysfunction; at its worst, you feel trapped at the figurative dinner table by the drunk relative who thinks being loud and offensive makes them funny. A script that trimmed the fat and chose its twists carefully would unleash more of its amazing promise.