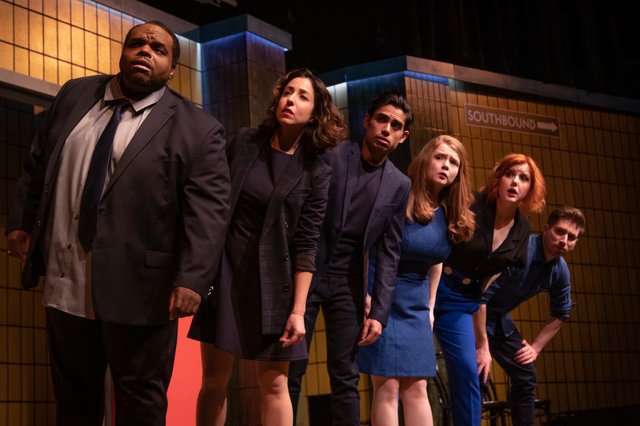 Second City’s 82nd and current Mainstage revue, Walking On Bombshells, opens on a stage that’s a convincing mock-up of the dingy Osgoode subway station. It’s the backdrop for the show’s opening musical number, a ditty about the perils of subway travel entitled “Is It Warm or Is It Wet?”

That specificity is unusual for the Mainstage show, whose sets are usually vague enough to suggest anything from a boardroom to a condo bedroom to a busy street. It’s initially distracting after the opening, but that soon fades, and it serves to firmly locate the show’s many sketch characters (and its cast) in downtown Toronto.

The specificity extends to the ensemble’s writing, which is bracingly current without typically being specific enough with names (politicians or otherwise) to date the material. The second scene is a clever take on call-out culture putting everyone in an office on edge (except the oblivious white guy), and more sketches cover systemic racism, online dependency, and marijuana decriminalization. That last topic is tackled by newest cast member PHATT al (perhaps best known off the Second City stage for his funk ensemble God Made Me Funky) in a pointed musical number about Black incarceration that’s atypical for this cast.

I say atypical because director Chris Earle (and assistant director Ashley Botting) have wisely tailored the show to showcase the cast’s strengths. While Chris Wilson, for example, can certainly sing, this ensemble mostly focuses on physical comedy, character work, and generating some surprisingly tender moments among the often delightfully vulgar scenes. For Wilson, that means a bravura sequence where a recently separated man tries to sleep on his friend’s love seat; he also takes a post-date bike ride through the downtown core with Stacey McGunnigle, with the two helmeted lovebirds dodging traffic and streetcar tracks.

Allana Reoch wordlessly carries a sketch with Wilson where a initially cocky single dad urges his shy son to order fast food, and at the other end of the age spectrum, confronts a race blind spot as a senior who meets her friend (PHATT al) regularly to feed ducks in a park. She also has a tender moment in a sauna with Nadine Djoury, where the two reveal some very intimate anxieties. Djoury in turn, with Sharijil Rasool, scores in a scene where their characters gripe (lovingly) about their immigrant fathers. She also, along with Wilson and McGunnigle, helps a coma victim remember a car crash.

None of this may sound particularly hilarious, but it is, due to the emotional beats the cast finds. And while there may be less music performed on the stage, the show has ace musical accompaniment from Jordan Armstrong. (Something else there seems to be less of is audience participation, which may be a selling point for some, and a bit of a let down for others.)

Walking on Bombshells runs at The Second City Toronto Tuesdays through Sundays until August 11th. Get your tickets HERE.