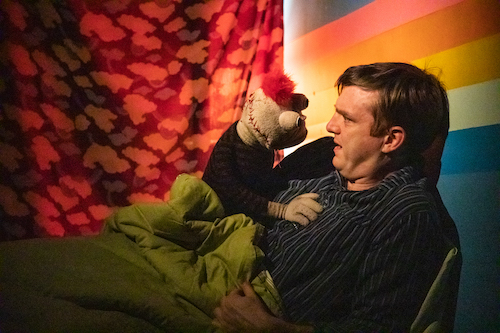 Hand to God at the Coal Mine

Hand to God is a really fucking weird play. Excuse the language but there’s really no other way to fully get the point across. This is some weird shit. Playwright Robert Askins has crafted a pastel-coloured Southern Gothic puppet show about demonic possession and religious hypocrisy that’s also a pointed mental health allegory and a straight-up horror show.

If that all sounds too crazy to be believed, just wait until you witness Frank Cox-O’Connell‘s bravura split personality performance in the leading role in Coal Mine Theatre’s current production directed by Mitchell Cushman. Cox-O’Connell is consistently one of the most interesting talents in town but his work here is that rare sort of “but how?!?!” performance that’s not only emotionally and technically remarkable but makes you want to drag a marathon runner to the theatre to show them what stamina really is.

The rest of the cast (Nicole Underhay, Ted Dykstra, Amy Keating, and Francis Melling) is understandably overshadowed but completely clutch in roles full of icky contradictions and ugly honesty, each of them painted over with a hard shell of either faux cheer or performative rebellion. The unsung MVP is Anahita Dehbonehie‘s inventive set which is as packed with quirks, surprises, and winning absurdities as the bizarro story it houses.

With the exception of the play’s high-water scene of self-inflicted violence, the wars of words- particularly the passive aggressive ones- tend to land far more damage than the carefully performed physical fights. Cushman’s frenetic direction hits energetic highs a bit too early and too often, never pausing to let foreboding do the emotional heavy lifting or terror creep in the space between big moments; the production is mostly big moments.

But the flaws almost feel textual, as if the play’s overwhelming muchness is part of the point. At the very least, the spectacle is unforgettable. Whether it’s as affecting as it could be with all Askins’ ambition and imagination smashed into what is ultimately a fairly intimate piece, that’s a harder call. But the spectacle, man- the excruciatingly intense, intellectually monstrous, physically exhausting spectacle that is Hand to God in all its fucking weird glory- that’s kind of unmissable.