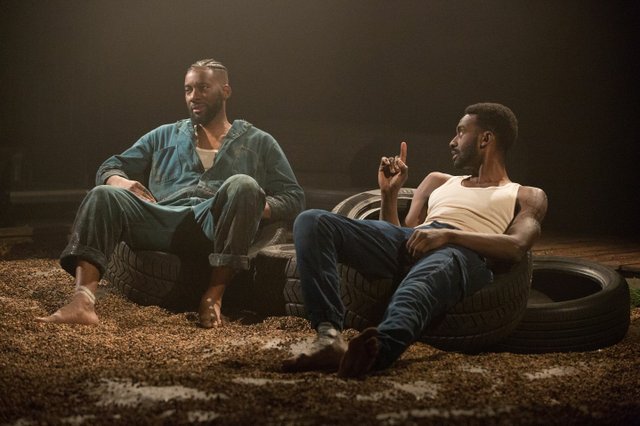 Theatre fans and writers long for a world where celebrities dropping into a local show doesn’t raise an eyebrow. The Brothers Size drew the attention of a wider audience thanks to Drake’s appearance at Soulpepper on opening night and kept it with a memorable and thoughtful performance.

Playwright Tarell Alvin McCraney rose to prominence when his play In Moonlight Black Boys Look Blue was adapted into an Oscar-winning film in 2016 but The Brothers Size has received critical acclaim since it premiered over a decade ago. Part of a trilogy of plays inspired by Yoruba mythology, this middle installment tells the story of ex-convict Oshoosi’s uneasy coexistence and cohabitation with his brother – and boss – Ogun. Perpetually hovering nearby is Oshoosi’s jailmate Elegba who, though he calls Oshoosi a siren for his enchanting voice, is more worthy of that term as he tempts his ‘friend’ away from his new lifestyle with the promise of adventure and cheap thrills. As Oshoosi grapples with these opposing forces, the strain on his relationship with his brother forces the two men to learn how to be vulnerable, honest, and affectionate with each other.

In previous runs many commentators focused admiringly on what the show has to say about the black male experience, particularly in the Deep South – the immediate impact of poverty and prison, the meaning of family and its inevitable disappointment, and a throttled masculinity that prescribes silence or violence as its only answers. I expected to see these themes explored more explicitly than they were, but this may be easier said than done. For one thing, although The Brothers Size is fine as a standalone piece, seeing it without its siblings removes a useful and sometimes necessary context. More importantly, the experiences that the show is ‘about’ – or that theatre audiences want it to be about – do not encourage any examination of them. When the mere expression of feelings or acknowledgement of issues is heavily policed – often all too literally – the result is hard to render with any realism.

This is no sleight against the cast who step into their roles with skill and confidence – including Mazin Elsadig, who joined as Oshoosi on short notice. His erratic exuberance contrasts well with Daren A. Herbert’s Ogun, who is convincing as the gruff, world-weary disciplinarian. If Oshoosi is too eager to wear his emotions on his sleeve and give in to them, Ogun bottles them up until long after they were needed. In one of the play’s more revealing lines, he snaps at Oshoosi that “You don’t do nothing quiet” before listing the many examples of his lack of manners. Ogun does everything quiet, breaking the silence only to bark a brisk order at work or chide his brother for yet another transgression. If he could be as critical of himself, he would see that he only dares to Try a Little Tenderness when communication has already broken down and the horse has bolted in Elegba’s car. When the two men finally open up to each other, it’s all the more powerful for coming so late – but, until then, so much has to be left unsaid that the journey there can drag or feel disjointed.

Director Mumbi Tindyebwa Otu finds other ways to fill that silence, breaking up the halting dialogue with song, dance, and live percussion music by Kobena Acquaah-Harrison. This adds an engaging variety to the performance and enhances what we do hear, even if the sudden tonal shifts can be jarring. This combines with Ken Mackenzie’s eye-catching set to offer audiences a more rounded audio-visual experience: the rusting hull of a car is half-buried in a narrow sandpit, surrounded by tyres, used for a wide range of functional and symbolic purposes.

If it’s good enough for Drake, is it good enough for the rest of us? He seemed to leave Soulpepper satisfied and I did too – even if, for me, it wasn’t the sensation it was (and he was!) for everyone else.