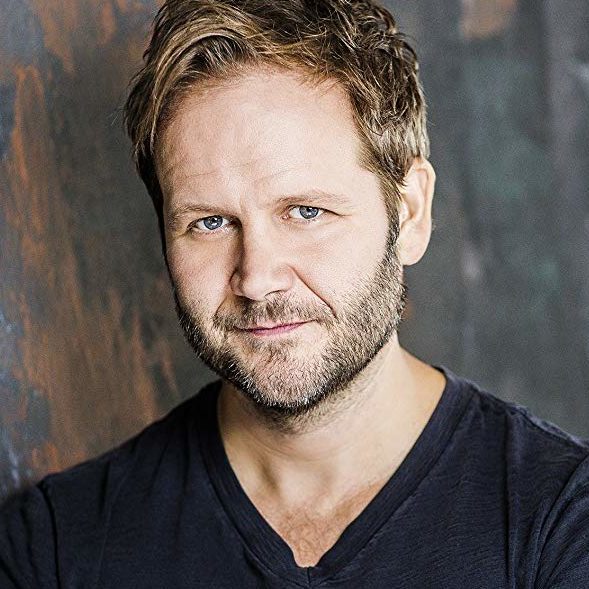 Evan Buliung is one of Canada’s great theatrical leading men. Nominated for his third Critics’ Pick Award, he’s the rare actor who is just as wonderful whether he’s doing Shakespeare, a modern play, or a musical. This year he’s nominated for Outstanding Supporting Performance in a Musical for his heartbreaking performance as Bruce Bechdel in Alison Bechdel’s autobiographical graphic novel-turned-musical Fun Home with the Musical Stage Company.

You can currently see him onstage as Larry Murphy in Mirvish’s Canadian cast of Dear Evan Hansen at the Royal Alexandra Theatre. Get your tickets HERE.

We last interviewed you for the Interview Series in 2016. Catch us up on how you’ve been since then.
Oh gosh, since 2016, life has been all over the place but I’ve been very well.  We did some Guys and Dolls over in Stratford which was total blast and I played Mercutio in R&J at the same time which was also a blast and by the end of the season I was beat! Then I came back to Toronto to play Bruce Bechdel in Fun Home for the Musical Stage Company and then shot some super fun tv projects and now we’re doing Dear Evan Hansen a the Royal Alex. We rehearsed in New York with the original creative team and it was a really great experience, mostly because my cast is full of awesome people!

This is your third nomination- one for a modern play, one for Shakespeare, and now one for a musical. How does musical work compare to modern or classical? Are you more at home in one genre over another?
Musical work is my first love, I grew up scouring record shops for old musicals and new ones to bring home and listen to. I grew up in the era of Phantom and Les Mis and it was a deeply rich time in the musical theatre scene.  I am truly blessed to be able to bounce around between genres, truly blessed, it’s never lost on me how lucky I am. It probably was lost on me at one time but then I grew up, haha.

How did you get involved with Fun Home?
I auditioned for Robert McQueen and Mitchell Marcus and Reza Jacobs, I sang “Edges of the World” and did some scene work. I felt very good about the audition and had a great chat with Robert about his ideas around the play but mostly the depth of sorrow within the character.

Bruce Bechdel is in a lot of ways defined by the things he doesn’t say. How did you approach playing someone with a ton going on inside that doesn’t match what’s going on on the outside?
Very simply but also it was very painful. A big theme in the play is shame and it’s certainly something I have struggled with in my own life, maybe I don’t have the same life story as Bruce but the dishonesty and fear is accessible, it’s not pleasant and it often hurt but in order to serve the piece, it had to be deeply explored. We were so lucky to have such an incredible creative team and amazingly generous group of actors who went to places and felt safe going there with each other.  It’s also a testament to incredible writing.

Did you approach the role any differently knowing you were playing a real person, though not someone famous?
Not really to be honest, I mean I wanted to do him a service. I wanted to believe at his core there was someone who could deeply love more than perhaps he’s given credit for.  But because of the time and place he was in, his emotional maturity was stunted and he was probably emotionally a child. Though only those close to him would know that. But the fights that I had with the amazing Hannah Levinson as young Alison often felt like two kids fighting on the school grounds.

The role of Alison is divided between three actresses. Tell us about developing a unique father-daughter bond with each of them and how those relationships were similar and different from each other.
The relationship between me and Hannah as young Alison was deeply flawed and Hannah is a young actress capable of incredible maturity and intelligence so it was easy for us to find that flow. As I previously said, I believe it was a constant struggle of who was the “child” in the family. My relationship to medium Allison played by the legend herself Sara Farb, was a lonely one. It was a “Cats in the Cradle” sort of family by that point, Bruce put all his energy into his secret life and the homes that he curated that there wasn’t a lot of time for the kids.  The relationship between older Alison played so brilliantly by Laura Condlln was more elusive as she didn’t really exist on my time line.  But her presence was always felt, ever present and exploring and delving just as madly for answers as Bruce delved for release.

Did you have a favourite moment in the show?
Absolutely listening to Laura and Sara and Hannah sing the finale, it was a perfect release for the hour and half march through the swamp. Their voices were beyond angelic together and to see the audience in the curtain call after that song was an experience. Many seemed crushed by its power.

Next up you’re in the Canadian Cast of Dear Evan Hansen. What’s that experience been like so far?
It’s been a wonderful experience. the creatives, the cast, the show. Certainly a different piece than Fun Home but equally as powerful.  I guess I am playing troubled dads for a while, I am lucky to have the opportunity.  We got to work with Michael Greif which a true pleasure and honour.  We’ve had people at the stage door that this piece speaks to so passionately, and they are very moved by it.  Our Choreographer Danny Mefford was the choreographer on the original Fun Home and one day in rehearsal I showed him a pic of myself and Hannah and Liam and Jasper, who played my children, and I actually welled up. Good memories.

Do you have anything you’d like to add?
Thank you so much for the nomination! Truly honoured to have been.