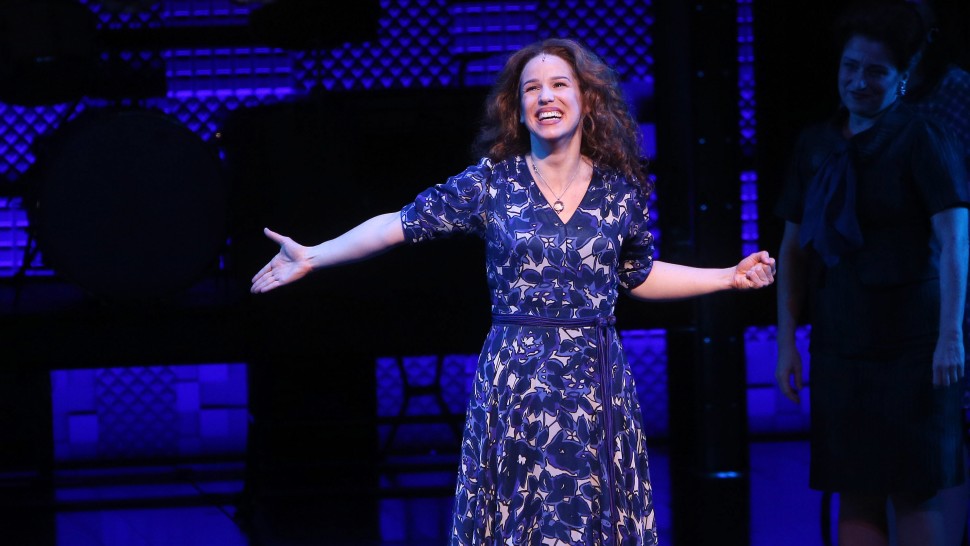 I came out of Beautiful: The Carole King Musical with a smile on my face. Seeing a musical is always a night full of fun and passion, and this show provides the audience with no less. There were flashing lights, impressive costume changes, and an evening of music we all know and love. However, despite the glitz, I wanted more from the show. There seems to be more of a fault with the script and flow of the show, rather than the talented performers.

Perhaps because the goal of Beautiful is to show what an effect one woman had on whole decades of performers, the pacing of the show seemed off. A scene change would be accompanied by set-and-costume change, and we would be blasted from the 50’s to mid-60’s. The costuming was always accurate, but seemed to speak a little too loudly, be too clear of a cue for the audience. Perhaps trying to span too much time was too ambitious for the show. It relies too heavily on set and costume to move the plot along. Additionally, while the performers all had excellent comedic timing, many of the jokes in the show seemed bland, overdone, or inappropriate. Insensitive jokes about infidelity or pregnancy landed awkwardly, and others seemed overdone. Admittedly, the audience was roaring with laughter at times, though most of these moments were in the latter half of the show, after a relaxing intermission. Its not that the show was inappropriate or dry, it’s just that it seemed to aim low and take the easy way out. I couldn’t help comparing this show to Ain’t Too Proud, and see that Beautiful doesn’t measure up. In a similar style and timeline, the performers playing The Drifters in Beautiful were unfortunately unable to hold a candle to those playing The Temptations.

While overall a little underwhelming, many aspects of Beautiful stood out and made me catch my breath. A stunning moment of emotional depth from lead actor Chilina Kennedy (Carole King) at the end of Act I was beautifully painful and poignant. It was nearly enough to outscore the inconsistent Brooklyn accent she needed to adopt for the role. The Ensemble also shone in group numbers – the “Broadway Medley” near the beginning of the show was powerful and joyful. And the women portraying The Shirelles gave stunning performances.

Beautiful is fun, energetic, and enthusiastic, bolstered by some of the second-lead characters. It is interesting to take a peek at the creation of hit songs in a rehearsal-style setting, and then have them layered with the glamour of big name stars. I enjoyed my evening seeing Beautiful: The Carole King Musical, but it was a little unfulfilling, despite the energy and dedication from all performers.