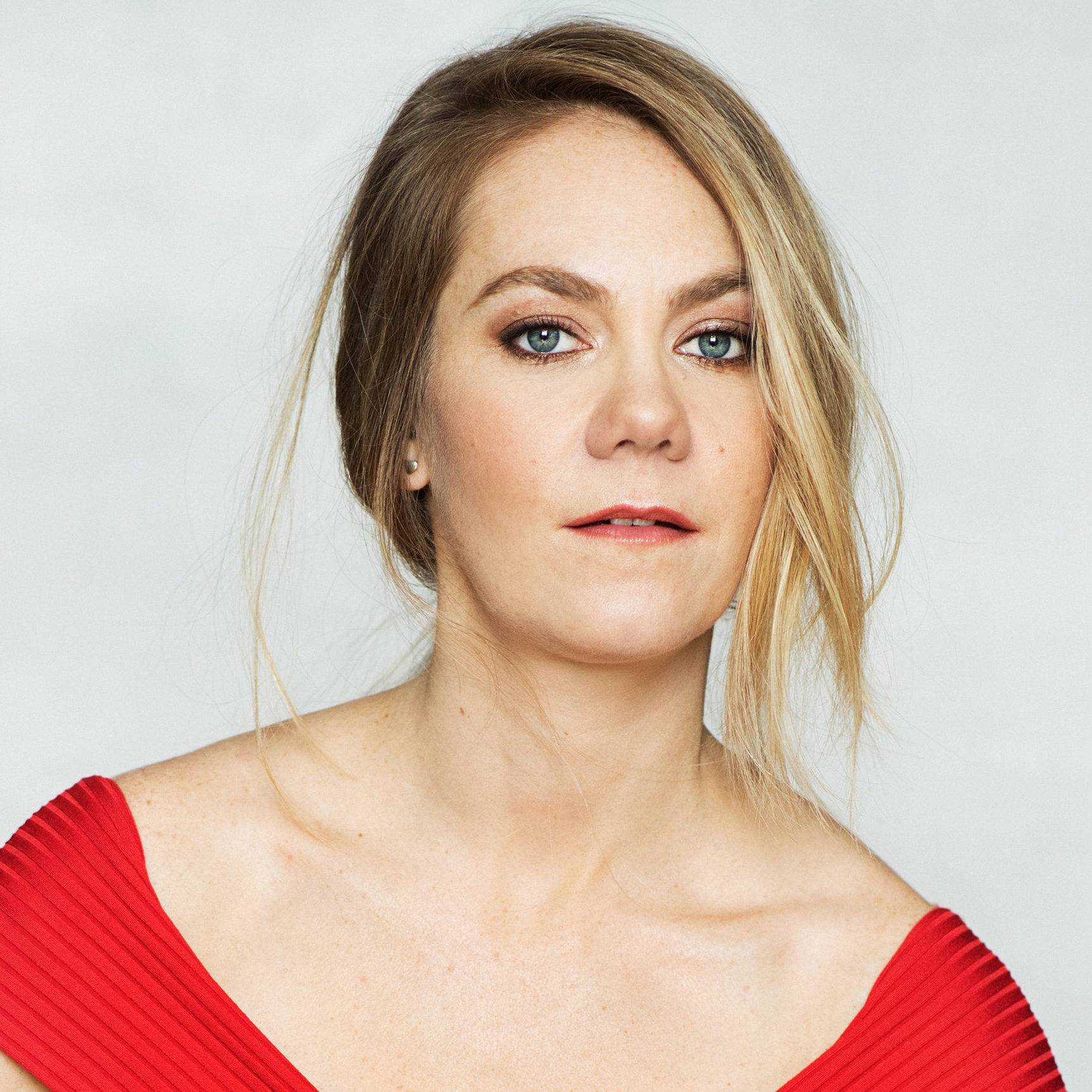 Playwright Erin Shields’ contemporary reimagining of Genesis was the big buzzy hit out of the Stratford Festival last season. Staged by director Jackie Maxwell in the intimate studio theatre, Paradise Lost captured the audience’s imagination and forced us to reckon with a story we thought we understood. 2013 Best Actress winner Amelia Sargisson earned her Outstanding Supporting Performance in a Play nomination for her vulnerable, thoughtful, and fierce interpretation of the world’s first woman.

Catch us up on life since your last Nominee Interview Series in 2014.
“No artist is pleased. There is no satisfaction whatever at any time. There is only a queer, divine dissatisfaction, a blessed unrest that keeps us marching.” (Martha Graham) I guess like all the rest, I’ve been marching. At the best of times, along trails burned by my curiosity and wanderlust and joy and daring; at the worst of times, marshalled by my demons and fears and the winds of pressure and expectation and perfectionism. But either way, soldiering on!

Since 2014, I’ve had the immense good fortune of working with evermore of my personal totem figures – the artists in this country whose imagination, intellect, rigour, playfulness, innovation, rebelliousness, and vision electrify, inspire and challenge me, and teach me to always strive for the truer, fuller expression – in life and art.

In October 2017, I became an aunt to a little comet named Dylan, and she truly lights up my life, and gives me a more immediate reason than I could have ever imagined to build a better world.

How did you get involved with Paradise Lost?
I was invited to audition for the piece in August 2017, when I was in the final weeks of the run of Lear/Twelfth Night with Shakespeare in High Park. I read the script in one sitting and could not wrest myself from my couch after those parting words of Satan seared themselves into my brain.

Eve is obviously a figure who has appeared in many iterations throughout cultural history. How did you approach marrying the classic interpretation of her with playwright Erin Shields’ more contemporary vision?
I feel like much of that work was done for me in Erin’s writing and in the imaginations of the audience. You can’t subvert something without conjuring the thing which is being subverted, right? So in subverting the classical – or patriarchal – vision of Eve, Erin necessarily – if indirectly – also renders that portrait, that version of her. For example, when Erin’s Eve has a line like “Is he sure about the rib?” or “Is it me or did my punishment seem disproportionate to yours?”, it kind of functions like the negative of a photograph and evokes for us that ubiquitous Baroque image of the mute, unquestioning, second-class, golden-tressed First Woman. And something I picked up from working with Eric Peterson is to never underestimate how much of the imaginative work – in the transaction of a live theatre performance – is actually done by the audience. I felt like that was especially true in this case since – as you’ve pointed out – almost everyone in the Western world has an idea or image of a figure as iconic as Eve. So really my task was to focus on realizing Erin’s version of Eve, knowing that the “classical” counterpoint would inevitably be conjured by that very undertaking, and would also be very alive in the minds of the viewers. That said, I did also read all twelve books of Milton’s phantasmagoric epic, and re-read Genesis itself, of course, and plastered my walls with every portrait I could find of Eve, from the earliest stone carvings onwards, just to have all that iconography dancing in my subconscious. Stephen Greenblatt’s book, The Rise and Fall of Adam and Eve, was also an invaluable resource to me in terms of chronicling and contextualizing those many iterations of Eve throughout history.

What were some of the most interesting conversations you had with director Jackie Maxwell in developing your interpretation of the piece?
Hmmm, we had so many! Jackie really fell in love with this play and devoted all of herself to studying it – her keen intellect, her overflowing heart, her raucous Irish! humour, and her masterful grasp of rhetoric, argument and language – so we could really discuss, dissect, and deconstruct the details granularly and I was so, so infinitely grateful for that. One of my favourite conversations with her was actually at a bar in Toronto in February, long before our rehearsals began in June; I referred to the thrill of doing something bad, and she paused and looked at me and said, “Maybe it’s the thrill of doing, and it’s only later that it’s judged as bad.” That delicious distinction struck me as entirely apt in Eve’s case, and it stuck with me over the course of the season. Another favourite conversation occurred when Jackie, Qasim and I were rehearsing Adam and Eve’s first fight. We had this “ah-ha!” moment when we realized that although the scene is written in a very familiar vernacular, with all the typical tropes you would expect of a mud-slinging, bickering couple, nothing was in fact familiar or typical or expected in this case, or burdened with millennia of baggage, because Adam and Eve – in this first ever marital dispute – are inventing – coining – the language on the spot. For example, nowadays when we say to a partner “Excuse me for wanting a moment to myself,” actually what we’re saying is “Fuck you, give me some space,” but it occurred to us that perhaps when Eve says this, she’s genuinely asking her partner to excuse or pardon or forgive her for needing a bit of privacy, and that that plea supersedes her need to indict him for not intuiting that she needed a moment to herself. That was a really fun discovery to make, and hopefully playing the language sincerely amplified the humour of the situation.

Did you have a favourite moment in the production?
I loved doing The Fall – that epic scene in Part 2 which begins with the sinuously-penned seduction by Lucy Peacock’s hand puppet snake, flows into taking that fateful bite of the apple, continues with Eve emancipating Adam by sharing the apple with him, and concludes with the unbridled carnal energy that erupts between Man and Woman. To enter that scene as an essentially sexless child just beginning to explore her independence and emerge from it as an intellectually and sexually awakened woman was so intensely, violently satisfying! I mean you rarely get that kind of an arc in a whole play, let alone in a single scene! Another favourite moment was one I got to observe from the wings just prior to my entrance into that scene: Satan’s transformation into the Serpent. The way that was realized by Jackie and Lucy and Judith and my fellow actors buried in the mound at that moment, animating it from within, was so purely theatrical, so simple yet dazzlingly inventive, that it almost invariably elicited an audible “oooouuuu” and “ahhh” from the audience. For me, it was a moment of pure theatre magic.

Tell us about working with Qasim Khan as your Adam and the rest of the cast.
Qasim Khan: only one of the greatest humans and artists I’ve ever met. And in fact before I met him, another one of the greatest humans and artists I’ve ever met – the resplendent Naomi Wright – informed me that he was just that, so this is a well-known fact about him. I could extol his infinite virtues until I’m blue in the face – his boundless generosity, his wicked sense of humour, his refreshing groundedness, his doting kindness – but I think what’s most salient here is that this play required us to be so starkly vulnerable, to literally lay ourselves bare, and also to walk the tightrope of the chiaroscuro of Erin’s writing – to go to places of abysmal darkness and raucous levity – and there’s no one in the world I can imagine having done that with other than him. He was so THERE for me as I negotiated my body issues in the face of the onstage nudity, and his ability to highlight in the most hilarious, droll and sardonic ways the ridiculousness and ultimate meaninglessness of situations or circumstances which would send me into paroxysms of panic and despair always, always brought me back down to earth. He was a partner to me in the truest, fullest sense of the word, and in a way that you rarely experience in life or art. So – Qasim – thank you; I love you!

As for the rest of the gang – Lucy Peacock, Sarah Dodd, Michael Spencer-Davis, Gordon Miller, Juan Chioran, Andrea Rankin, Beryl Bain, Jessica Hill, Kevin Kruchkywich, Devin MacKinnon… What can I say? I blush just to list their names, let alone recall that I actually had the privilege of sharing a stage with them. All-stars, through and through. Felt like they were my guardian angels. We came together as a deeply supportive team, which is a testament to the generosity and humility of each of these servants of story, but also to Jackie’s inspired leadership, which made everyone feel empowered and gave wings to our creativity.

What are you working on now/next?
I have the great privilege of being back at Stratford for another season, working on three wildly different plays: the prescient and searingly powerful Othello, the riotously rompish Merry Wives of Windsor, and, finally The Front Page, for which I cannot provide descriptors just yet because we only dive into it in June. I’m also writing a play, Bloodshot, which I had the thrill of workshopping with a fantastically talented gang this past January and which is on the back burner now but ever percolating in my imagination. And finally – to paraphrase Kafka, and with a tip of the cap to the luminous Kat Gauthier who sent me this quotation – I’m working on “following my most intense obsessions mercilessly.”

Do you have anything you’d like to add?
Just thanks for the opportunity to reflect on what was one of the most joyful and nourishing creative processes of my life!