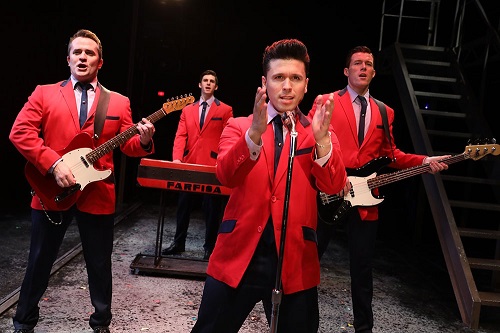 It’s very easy to understand how Jersey Boys has been such a big hit with audiences around the world. Combining the feel-good hits of Frankie Valli and The Four Seasons with the lively story of how it all came together, the show really puts other jukebox musicals to shame.

Now in its 13th touring season, this production lives up to the hype set by previous incarnations. The cast is full of impressive singers and actors, and they eke out nearly every funny and delicate moment from a shrewd script.

Playing Frankie Valli, Jonny Wexler has a truly special voice and inhabits the part well. Wexler actually played Joe Pesci in a previous production, the future Oscar-winning actor who we learn helps the band out in the early days. In this show Pesci is performed by Rich Desloge, who amongst a talented cast is a real highlight, and must surely be in line for the same promotion.

The show moves smoothly between their catalogue of songs and the stories surrounding them, from struggles to get songs produced, through to love interests and conflicts which threaten to cripple the group. A number of characters jump in and out of the story around the group, but special mention should go to Wade Dooley who plays the hilarious, flamboyant record producer Bob Crewe.

The production design keeps everything fairly simple, maintaining its focus on the fantastic tunes, subtle dance moves, and iconic (not-so-subtle) jackets. Along with classic microphones and cameras, the mood is set by fun projected cartoons designed by Michael Clark, and some innovative lighting designs from Howell Binkley – at one moment making us feel the energy of being on stage with the group under the gleaming stage lights.

It isn’t all plain sailing, though. The production does start quite slowly and the characters seem slightly subdued at the beginning. Corey Greenan’s Tommy Devito – the brash leader who forms the group but later lands them in trouble – feels a bit too caricatured, his narration of the story a little monotonous and unnatural.

However, the plot soon progresses and other characters take the lead in telling the story more effectively. Coinciding with their band name, the show is split into four ‘seasons’ narrated by another member of the band.

With boyish confidence and a silky baritone voice, Bob Guadio (Eric Chambliss) picks up the pace as the group starts to breakthrough, then in the second half the quiet bass singer Nick Massi (Jonathan Cable) comes out of his shell, shifting the play into another gear. When the story of The Four Seasons enters winter, Wexler shows real depth in leading the audience into the most moving moments of the play.

Despite a few serious moments, the musical is above all a celebration. Bringing songs back to life like “December 1963 (Oh What a Night)” and “Can’t Take My Eyes Off You”, the show provides an injection of old-fashioned toe-tapping joy. With that energy behind it, Jersey Boys will be touring the world for many more years to come.